“My colleagues love them and love recommending them,” said Christopher Kisicki, a cycling associate at the flagship store in Seattle of REI, the sporting goods retailer. “We can’t keep them in stock,” he said.

Monkeylectric does $1 million in sales annually. There is the Christmas rush and in summer, the Burning Man bump.

“I hate to say it, but it’s almost mandatory to have them on your bike at Burning Man,” said Jefferson McCarley, manager of the Mission Bicycle Company, which builds custom bikes in San Francisco.

Monkeylectric’s market is a niche one, but growing: As of 2015, 885,000 people commuted on bicycles in the United States, up from 488,000 in 2000, according to the Census Bureau. And biking in the dusk or dark is clearly very dangerous. According to the National Transportation Safety Board, bicycle deaths occur most often from 6 to 9 p.m.

In an unscientific survey along San Francisco’s Market Street one night last week, most cyclists had front lights and weak red reflectors on the back (as required by law), but no side lights. Few bicycle lights are as eye-catching or noticeable to motorists as Monkeylectric’s lights. They are sold in 500 stores and on Amazon, which offers many similar-looking products for much less money.

Mr. Goldwater calls many of those products knockoffs. Every year, he said, he saw a half-dozen more companies based in China with look-alike lights that sell for $10 or $15. Mr. Goldwater, who holds five patents on bicycle lighting, refers to them as “toys,” although some consumers fail to see the difference.

Cheaper lights, Mr. Goldwater said, tend to be dim, not very durable and not waterproof. 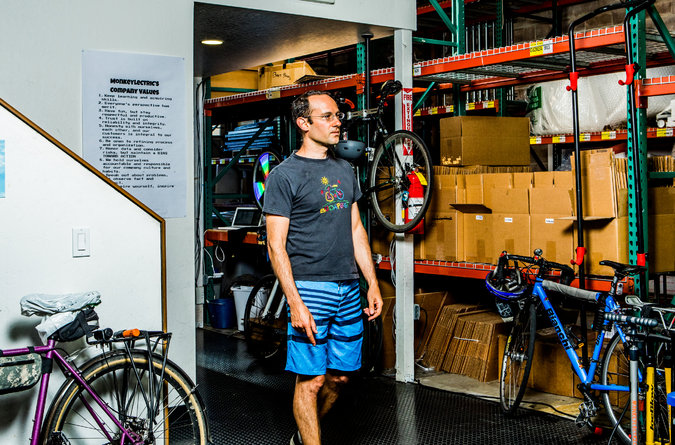 Monkeylectric’s founder, Dan Goldwater, said that when he started making his products, “I couldn’t imagine how I could make a commercial project out of it.”

James Hill, a worker owner at Missing Link, a cooperative bicycle shop in downtown Berkeley, who monitors bike lights when he is in his car, recalled being at a stoplight with his wife late one afternoon when they watched a cyclist whip across the road, with “very impressive lights,” he said. “A lot of inventions are terrible,” he said. “A lot of them are great.”

Monkeylectric lights “are arguably the best way to be seen” by motorists, he said.

Janelle Wong, operations manager at the San Francisco Bicycle Coalition, a nonprofit advocacy group with 10,000 members, has Monkeylectric lights on three of her five bicycles. “It’s an affordable way to light up a bike,” she said.

A few miles away in Emeryville, a company called Revolights also sells LED bicycle lights. It makes bright front-wheel lights that illuminate the road ahead, and red taillights that blink when a cyclist slows down and that can be used as turn signals. A Bluetooth version gives speed, distance, tracking and weather alerts. Revolights, which sell for $149 to $249, are sold at REI, in bike shops and on the company’s website.

The co-founder of Revolights, Kent Frankovich, a 33-year-old mechanical engineer, began his quest for a better bike light after pedaling into a pothole one night while commuting from Stanford University where, among other things, he helped design a solar-powered freezer. Before entering the bicycle business in 2011, he was a researcher at a biorobotics lab and at the NASA Jet Propulsion Laboratory, helping build an instrument that identifies rocks and soil on Mars.

Despite his product’s benefits, Mr. Frankovich said, “It’s a hard sale.” Many cyclists are minimalists, reluctant to add anything to their simple mode of transportation.

That a product improves safety is insufficient. It has to be cool, Mr. Frankovich said. “Who in the world doesn’t know a helmet will save your life?” he said. Yet many cyclists reject them because “they think they look dorky.”

At several bike stores contacted for this article, sellers said they liked Revolights, but considered them on the expensive side, particularly for cost-conscious consumers who buy modestly priced bikes.

But that is not a problem at the Mission Bicycle Company, the custom bike shop that builds $999 bicycles. Revolights are “fashion forward, high-tech lights,” said Mr. McCarley, the manager. “Our customers appreciate minimalism.”

Years ago, the Mission Bicycle Company shared a Kickstarter campaign with Revolights, but today, Mission Bikes is developing an LED wheel light to be built into its bikes.

Before Mr. Goldwater started Monkeylectric, he considered his art project “a Ferrari.” The market was there, but, he said, “I couldn’t imagine how I could make a commercial project out of it.”

His early work would become a precursor for Monkeylectric’s high-end product that, when spun, shows video clips of, say, a swimming fish or a running dog — for $1,000.

When Mr. Goldwater got started, there was already one LED bicycle light company, Hokey Spokes. Carole Barnes, who with her husband, Richard, bought the business in 2005, said they had since “lost our enthusiasm.” They sell a few hundred lights a year, she said.

Mr. Goldwater started working on his product 12 years ago, when he was an electrical engineer at the MIT Media Lab researching smart paint and self-assembling robots. He made what he calls “a monumental art piece” — the bicycle with kaleidoscope wheels he rode at Burning Man. For an electrical engineer who cycles, adding LEDs to wheel spokes “is a coming-of-age project,” Mr. Goldwater said.

The appeal is obvious: “When you spin, the effect is much greater than when you started,” he said.

Lights on rotating wheels create what scientists call persistence of vision, which is an illusion. When bicycle wheels with LED lights rotate, our eyes perceive moving light as a continuous image.

Monkeylectric has gone to the Kickstarter well three times. The last time, it raised $248,331, many in preorders for new lights that automatically turn on when rotated in the dark.

Mr. Frankovich, the founder of Revolights, holds six patents on bicycle lighting. He has raised funds on “Shark Tank,” Indiegogo and Kickstarter.

Both companies have marketed their products on Facebook, Instagram and other sites. But Mr. Frankovich said that nothing compared with “street viral marketing” — cyclists pedaling dark streets, with wheeled illumination.

“Every bike is a little billboard for us,” he said.