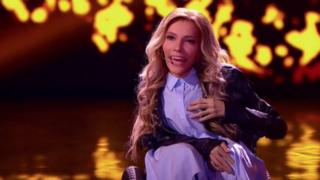 Ukraine has barred Russia’s Eurovision contestant because of a visit she made to Crimea, annexed by Moscow in 2014.

Julia Samoilova was banned from Ukraine for three years because she had entered Crimea “illegally” – entering directly from Russia, not via Ukraine.

Samoilova, 27, has confirmed that she sang in Crimea in 2015. Ukraine is due to host Eurovision in Kiev, in May.

The European Broadcasting Union (EBU), which founded Eurovision, said it was “deeply disappointed” by the news.

“We have to respect the local laws of the host country, however we are deeply disappointed in this decision as we feel it goes against both the spirit of the contest and the notion of inclusivity that lies at the heart of its values,” it said in a statement.

The EBU said it would “continue a dialogue with the Ukrainian authorities with the aim of ensuring that all artists can perform” in Kiev.

Senior Russian politicians called for a boycott of the event.

The Eurovision song contest just got political. Russia and Ukraine are now locking horns over Moscow’s choice of competitor.

There is already a predictable chorus of fury here. A deputy foreign minister called the ruling outrageous, cynical and inhumane – no less. One MP is demanding that the contest is moved to another country while a second warns that Russia will boycott every Eurovision to come unless organisers intervene to resolve this.

Some suspect this is precisely what Moscow wanted when it chose Julia Samoilova, knowing that she had travelled to Crimea.

Adding to the howls of outrage here is the fact that the singer being banned has used a wheelchair from childhood and this year the slogan for Eurovision is celebrating diversity.

Russia and Ukraine have been at loggerheads since the annexation of Crimea and subsequent fighting in east Ukraine, which Moscow is accused of stoking.

Ukraine is hosting the competition after its singer, Jamala, caused an upset by winning in Sweden last year.

Her song, 1944, was about Joseph Stalin’s mass deportation of the Crimean Tatars during World War Two.

The Security Service of Ukraine has blacklisted at least 140 other Russian artists.

It said earlier it would verify information about Samoilova’s visit to Crimea and take a decision.

Responding to the ban, Russian state TV’s Channel One, which broadcasts Eurovision, said in a statement: “Ukraine didn’t even have the common sense to make use of this opportunity to look like a civilised country.”

Who is Julia Samoilova?

Last month, the contest was rocked by the resignation of 21 top-level staff who organise the event.

The Ukrainian Eurovision team said they had been stripped of major responsibilities in December, when a new boss was appointed to the organising committee.

According to their resignation letter, they were “completely blocked” from making decisions about the show.

The EBU told Ukraine’s public broadcaster to “stick to the timeline” despite the upheaval. It insisted the event would go ahead as planned in Kiev.