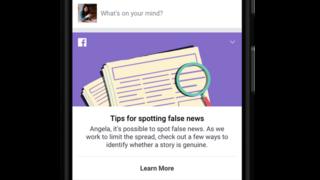 Facebook is launching an educational tool as part of measures it is taking to counter fake news.

For three days, an ad will appear at the top of users’ news feeds linking to advice on “how to spot fake news” and report it.

The campaign, which will be promoted in 14 countries, is “designed to help people become more discerning readers”, the social media firm said.

But experts questioned whether the measure would have any real impact.

“Until Facebook stops rewarding the architects of fake news with huge traffic, this problem will just get worse,” Tom Felle, a lecturer in digital journalism at City University told the BBC.

From Friday, users who click on Facebook’s ad will be redirected to its help centre, where they will see a list of 10 tips for identifying false stories.

These include looking at an article’s URL, investigating the source of a story and thinking more critically about whether an article is a joke.

It also recommends being “sceptical of headlines”, as false news stories “often have catchy headlines in all caps with exclamation points”.

Facebook’s new guide is a useful primer on the basic principles of good journalism. If all the millions who will see it popping up in their feeds read and digest it, maybe it will have an effect.

But it will only be there for three days and one has to suspect that it will be read in the main by people who are already suitably sceptical about hoaxes and propaganda. So I’m not convinced that this will be seen as a game changer in the battle to make Facebook a place you go to find the truth, rather than wallow in your friends’ prejudices.

What could be more effective is a German plan to combat hate speech and fake news that Facebook does not like one bit.

Angela Merkel’s government has just approved plans which could see social networks fined up to 50m euros if they fail to remove illegal content within 24 hours.

Adam Mosseri, vice president of news feed, said: “We think these tips will help people become more discerning readers, which is critically important as we’re moving to a world where people need to be more sceptical about what they read to make sure they are not misled or lied to.”

However, he also said the tool was just one part of a broader strategy, and that there was “no silver bullet”.

Mr Felle said the move was “welcome” but that Facebook should go further.

“One of the biggest problems with fake news is that the algorithms that run social media sites like Facebook and search engines such as Google are being gamed by black ops companies.

“These tips to spot fake news are welcome but do nothing to address that fundamental problem – in fact they put the onus on audiences to be suspicious of what they share, expecting viewers to be fact checkers – rather than acting to stop the spread of potential propaganda in the first place.”

Facebook has been under pressure to combat fake news on its platform after claims it was used to sway voters during the US presidential campaign.

Examples include a story that falsely claimed President Obama had banned the pledge of allegiance in US schools, and another fake news item, saying former presidential candidate Hillary Clinton was part of a paedophile ring.

Facebook has since taken action to improve its monitoring and reporting processes.

Asked whether this had reduced fake news, Mr Mosseri said there had been a “reduction in the US, and no growth in Europe”.

The campaign will appear in the following places: