Home Lifestyle Art Faith and Identity Clash in ‘The Profane’: An Actors’ Round Table

TALA ASHE I was interested in the premise, especially right now. These two immigrant families have assimilated in very different ways. Growing up as an Iranian-American, I looked around and I saw, even in Ohio, a lot of different Iranians.

LANNA JOFFREY Zayd, the playwright, did say that he wrote this play very much exploring what it is to be American. He wanted to show families that consider themselves American but are completely different. That’s a huge question right now. Who’s American? Who should be here? 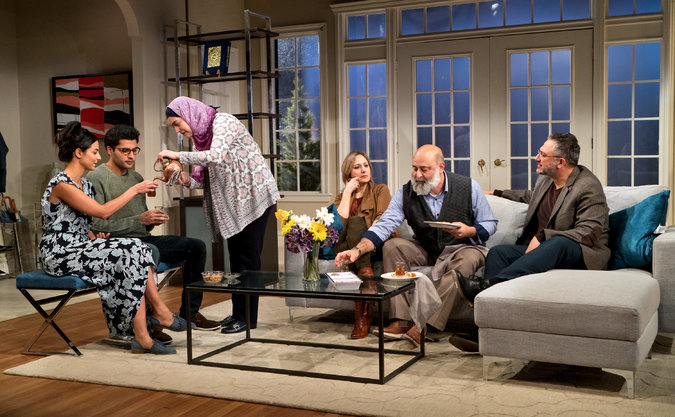 Was it a problem for you that “The Profane” is written by a white playwright and has a white director?

HEATHER RAFFO It put extra pressure on us. And then we got pressure from our communities as well. We feel a huge pressure to get it right and be together in our rightness.

FRANCIS BENHAMOU It’s pretty cool that a guy wants to write about an Arab family instead of writing another white story.

How are audiences responding?

JOFFREY We’ve had two talkbacks so far. There are questions about whether Emina should be wearing a hijab if she’s found the Muslim faith. There are these preconceived notions that people have about the Muslim religion — that they all wear hijabs, that they’re all one way. There’s just as much of a spectrum as there is with Judaism and Christianity.

Are these characters a departure from the kinds you usually play? Do you feel a personal connection to them?

ASHE I feel an enormous pressure to sensitively and accurately portray Middle Eastern characters. I’m not Muslim, I don’t know any more about Islam than what I’ve read in a book. A lot of times you’re brought into the room and sort of expected to represent something that you don’t. That challenge and that pressure manifest in many ways.

RAMSEY FARAGALLAH Before 9/11, if you were brown, you were basically just a cabdriver or a punch line. Somebody was going to pour soup on you. And then, with all the horrors of 9/11, things slowly started to change. You’re telling some stories about real people. Other times, you’re like, “Well, gosh, if I do this one terrible job, I could make a living for a year.” We have to make those choices as artists, and those are hard choices to make.

BENHAMOU I’m kind of a mutt. My family is from everywhere. I’ve always been other no matter where I am. I get cast in a lot of ethnicities. I’m actually Jewish. I love the opportunity to always be the other, because I can relate to that, that’s how I grew up.

TAFTI We don’t have a lot of plays about Islam coming out. We have Ayad Akhtar, and that’s about it, right? So the pressures of trying to tell this story fall upon a production that can’t necessarily support it, because it’s talking about one nuance.

RAFFO You can’t say that’s it. There’s so much work out there. Something I’m responding to in the piece is how different the children are from the parents. Because my father’s experience was to become completely involved in an American lifestyle. He told me once, ‘You’re more Iraqi than I am.’ There were decades of my life completely dedicated to being an Iraqi-American, and I really think that’s super resonant to where Emina’s going.

ASHE I was born in Iran, came over to Ohio with my parents. And my parents are aggressively liberal. They’ve been almost too supportive of this crazy thing I’ve decided to do. In Ohio and even at Boston University, where I got my B.F.A., I didn’t have a sense of otherness. It wasn’t until I came to New York and saw the things I was submitted for like, oh, they want to put me into this category, into a head scarf.

When you were growing up, did you see actors who looked like you?

FARAGALLAH I didn’t see any brown people in television or movies, but it didn’t matter. I honestly didn’t even realize that I was an Arab. I grew up in Southern California — surfing, skateboarding, illegal drag racing. When I came here, if I wanted to go out on auditions, they were like, ‘You’re a Pakistani cabdriver.’ And I’m not!

ASHE The movie “Not Without My Daughter,” starring Sally Field haunted generations of Iranians.

JOFFREY Oh yeah. It scarred us. “Not Without My Daughter” was so painful because it just made all Iranians seem terrible and evil. They all sit around on Persian rugs.

How do you feel about the ways in which Middle Eastern and Arab-American characters are represented in other media today?

JOFFREY We’ve had lots of conversations about Reza Aslan and his whole campaign to bring Middle Easterners and Muslim Americans into the mainstream. He is focusing on bringing us into pop culture and making us part of movies and musicals.

RAFFO There isn’t a process yet through which these communities can express themselves and say whatever they want and just be mainstream.

ASHE Television is, in very flawed ways, doing a better job than the theater.

TAFTI Television? We get tyrants and terrorists. That’s a bad job.

Would you ever play a terrorist?

TAFTI It’s tricky. I try to stay away from any sort of terrorist thing, because that story is already being told. With theater, I’ve been able to play a lot of different roles. In “Small Mouth Sounds,” I was playing a yogi, for God’s sake.

ASHE There’s less of an opportunity for collaboration. My hard line, sort of, is hijab. I was confronted with it recently, at a really wonderful theater. I was asked to wear one. I said no. It felt like it was a symbol that the director wanted but had no interest in having a conversation about what that symbol represents right now.

JOFFREY I was in a show in London, and they wanted me to wear a hijab for one of the characters. And I was like why? Why would grandma have a hijab? And they said, ‘Oh, just for the visual of it.’ I’ll do it if it makes sense for the character. Carmen wears the hijab in this play, but she’s sassy and fun, she’s not a “Not Without My Daughter” character. I felt Carmen had dimension.

How can more stories get told?

ASHE I do think it requires institutional support, which I don’t see right now. I appreciate that [Mr. Akhtar’s] “Disgraced” has been produced as much as it has, but sometimes it seems like if a theater does “Disgraced,” they don’t do a Middle Eastern play.

RAFFO That’s the one ethnic play, and then you don’t do another one. You still have to fight for the ethnic slot.

ASHE The Public is great. Oregon Shakespeare is great. You see a rainbow of stories consistently. But other theaters can do a better job.

Do your lives as actors and as citizens feel different since the election?

ASHE It’s really upsetting. When the Muslim ban first happened, I was coming back from Mexico into New York, and I was shaking as I was going through immigration, feeling so grateful that I had a U.S. passport, but also not proud to have a U.S. passport. I was thinking about the refugees and all the people and my parents, what they went through to come here and what exemplary human beings they are and what an asset to this country. And what am I doing, being an actor? I need to go and enact change and do something. On the other hand, I believe in stories, and I believe that stories can help and move.

RAFFO I feel galvanized. All the hard stuff aside, we work in an art form that humanizes. We are in the best possible humanizing art form. It’s better than TV; it’s better than film. It’s a live experience with humans. It is a profound art form if you’re doing the right stuff at the right time.

An article on Page 6 this weekend about the play “The Profane” misidentifies the cast member who comments on the fact that the author and the director of the play are both white. It is Francis — not Tala Ashe — who says, “It’s pretty cool that a guy wants to write about an Arab family instead of writing another white story.”