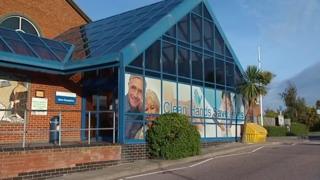 A hospital has planned for a possible lack of doctors as a result of tax changes, the BBC understands.

East Kent Hospitals fears locums will refuse work because of a drop in pay of 20% when tax and national insurance is deducted at source from Thursday.

However, the NHS trust dismissed a claim it could partially close an A&E department to ease any shortage.

The British Medical Association (BMA) could not comment on whether locums would turn up for work but said working conditions including unmanageable workloads were causing shortages across the health service.

The Health Service Journal has described the NHS as being in a “Mexican standoff” with staff over the new tax rules, with other hospitals potentially affected.

Live: More on this story and other news from Kent

About 80% of Margate’s Queen Elizabeth the Queen Mother (QEQM) hospital’s middle grade doctors in the emergency department are locums, according to a document seen by BBC South East.

That compares to 35% at William Harvey Hospital in Ashford, it says.

It suggests locums are planning to withdraw from shifts despite a 12% increase in their rate – to £75 an hour from about £65.

The document outlines suggestions for coping with a staff shortage which include cancelling operations and drafting in other healthcare staff.

The hospital is offering substantive staff £90 an hour to do extra shifts and cancelling annual leave but is doubtful this will solve the problem, the document says.

It lists a range of possible coping measures including:

In a statement, the trust said: “These suggestions were made by local staff. Only one option is being taken forward by the trust which is combining rotas across our two accident and emergency departments.

“We have not considered and are not introducing any partial closures, temporary or otherwise, to the A&E department of the Queen Elizabeth the Queen Mother Hospital or the closure of Buckland Hospital.

The Deputy Chief Executive of East Kent hospitals said it was considering the locum rate but had not yet agreed one.

Dr Mark Porter, BMA council chair, said: “We are seeing the result of years of poor workforce planning being borne out. Locums are an important part of the NHS workforce but cannot provide a solution to long-term gaps in the NHS workforce.

“Hospitals are increasingly relying on locums as they are unable to attract staff to take up full-time posts, or cannot advertise for full-time positions due to funding pressures.

“We need to urgently address the working conditions, including unmanageable workloads, which are causing staff shortages across the health service, particularly in areas such as emergency and acute medicine.”