The administration has not ruled out a second term for Ms. Yellen, but Mr. Trump said on the campaign trail that he would “most likely” pick a new person. Ms. Yellen’s management of monetary policy may matter less than her disagreements with Mr. Trump about regulatory policy and Mr. Trump’s preference for people he knows.

Ms. Yellen said Wednesday that she had not had any conversations with the administration about its plans. She declined to comment on her interest in a second term.

If Ms. Yellen is replaced, she would become the first Fed leader in 40 years to serve only a single term. The last three leaders — Ben S. Bernanke, Alan Greenspan and Paul A. Volcker — were renominated by a president of a different party.

Why the Fed Raised Rates 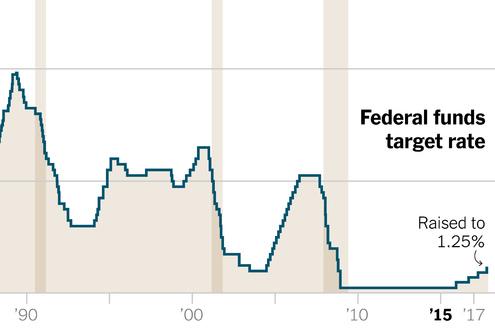 
The Fed has increased its benchmark interest rate by a full percentage point over the last two years, after leaving the rate close to zero from late 2008 to late 2015.

Ms. Yellen and her colleagues have concluded that the economy is growing about as fast as it can. Low rates encourage borrowing and risk-taking; the Fed is now trying to raise rates to a level that neither encourages nor discourages economic activity. Most Fed officials expect that the Fed will raise rates at least one more time this year.

So far, however, financial markets are not cooperating. Interest rates on auto loans have increased a little since the Fed started raising rates in 2015, but rates on mortgage loans are about the same. Rates on some corporate loans have even declined. Measures of financial conditions have loosened.

The march toward that neutral stance reflects the Fed’s upbeat view of economic conditions. “The labor market has continued to strengthen,” the Fed said in a statement published at the end of a two-day meeting of its policy-making panel, the Federal Open Market Committee.

The Fed added that economic growth “has been rising moderately so far this year,” making no mention of weakness during the winter.

The Fed in recent years has been consistent in predicting faster inflation — and in being wrong. The Fed conceded it was overly optimistic in predicting stronger inflation this year. In economic forecasts published Wednesday, Fed officials predicted that prices would rise by just 1.6 percent this year, down from a forecast of 1.9 percent in March.

Ms. Yellen said the Fed was keeping a close eye on a recent downturn in inflation. But she also said officials expected inflation to rebound because of the continued decline of the unemployment rate and other signs of a tighter labor market, including worker shortages in some parts of the country. The unemployment rate fell to 4.3 percent in May, and in a new set of forecasts the Fed published Wednesday, some officials predicted the rate could fall below 4 percent.

Ms. Yellen also noted a sharp decline in the price of cellphone service is weighing on inflation. That is a good thing for consumers, and a one-time event.

“We continue to feel that with a strong labor market and a labor market that’s continuing to strengthen, the conditions are in place for inflation to move up,” she said.

The Fed affirmed Wednesday that it planned later this year to start reducing its portfolio of more than $4 trillion in Treasuries and mortgage-backed securities.

Neel Kashkari, the president of the Federal Reserve Bank of Minneapolis, was the only member of the Federal Open Market Committee to vote against the rate increase at Wednesday’s meeting. He has argued that economic conditions remain too weak.

Mr. Trump, by contrast, has shown some interest in appointing Fed officials who want to raise interest rates more quickly. The administration is planning to fill two vacancies on the Fed’s board by nominating Randal K. Quarles, a Treasury Department official in the George W. Bush administration, and Marvin Goodfriend, a former Fed official who is a professor of economics at Carnegie Mellon University.

Both men have criticized the Fed for its efforts to stimulate growth in the aftermath of the financial crisis.

At times, however, Mr. Trump also has praised Ms. Yellen’s efforts. When Mr. Trump first met Ms. Yellen, at the White House earlier this year, he told her they were both low-interest-rate people.

Asked about the conversation on Wednesday, Ms. Yellen smiled. “I have felt that it’s been appropriate for interest rates to remain low for a very long time,” she said.

The sharper differences regard regulatory policy. Mr. Trump has repeatedly promised to relax financial regulations, and the Treasury Department earlier this week released a description of its plans for doing so, which it says will increase economic growth.

Ms. Yellen, by contrast, played a key role in strengthening financial regulation after the 2008 crisis, and she remains a staunch defender of the benefits of those changes.

“I don’t think our regulations have played an important role, at least broadly speaking, in impeding credit growth and the growth of the economy,” Ms. Yellen said Wednesday.

While the administration is at the beginning of the search process for a new leader of the Fed, speculation among investors and other close watchers of the central bank is already in high gear.

Mr. Cohn, who has the president’s ear on economic issues, is widely seen as a potential candidate for the post. Kevin Warsh, a former Fed governor who is a member of Mr. Trump’s business advisory council, is also expected to receive consideration.

Neither man is an economist. The last Fed leader without a doctorate in economics was G. William Miller, a businessman who served for about 17 months in the late 1970s. Mr. Trump has shown a marked preference for business leaders. But he could consider prominent conservative economists like Glenn Hubbard, the dean of the Columbia Business School and a former adviser to Mr. Bush, and John Taylor, a Stanford University professor.

Ms. Yellen could choose to remain on the Fed’s board even if she is not nominated to a second term as chairwoman. Her term as a Fed governor does not end until 2024.