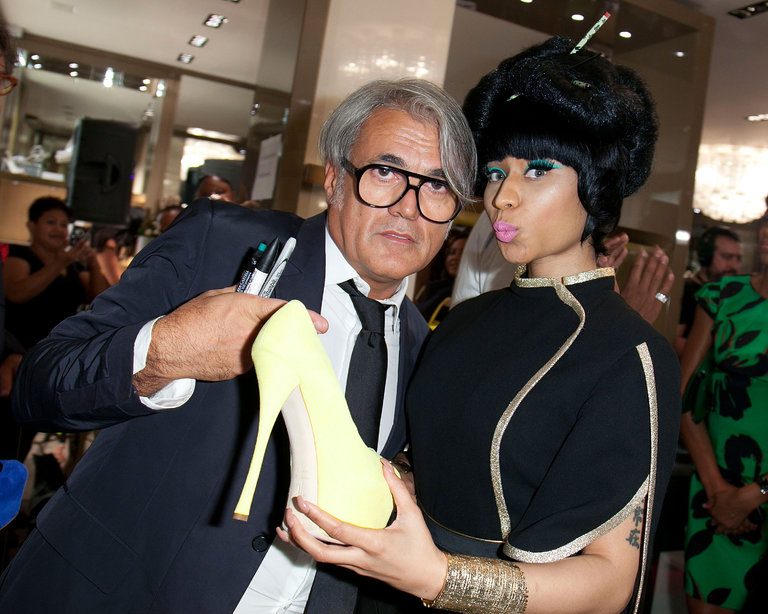 The designer Giuseppe Zanotti and Nicki Minaj in 2011, during happier times.

Another day, another social media feud. On Friday morning, Nicki Minaj took to both Twitter and Instagram to call out Giuseppe Zanotti, an Italian luxury shoe brand, for using her name in its designs and tapping into her fan base without offering her payment or a creative collaboration in exchange.

Ms. Minaj asserted that despite Giuseppe Zanotti’s having recently worked with celebrities like Jennifer Lopez and Zayn Malik, the company’s press office had refused to take calls from Ms. Minaj’s agent. She added, “The racism & disrespect won’t b tolerated,” implying that Giuseppe Zanotti’s cold shoulder was somehow a matter of racial discrimination.

On Instagram, Ms. Minaj told Mr. Zanotti that he had 24 hours to respond to her, and asked her fans on Twitter, whom she calls “Barbz,” to make her complaint a trending topic.

The Minaj army quickly took up the call, running with the hashtags #GiuseppeWhatsGood and #RunMeMyCheck, temporarily raising them up into Twitter’s top trends.

It was not the first time a celebrity has publicly complained about being ignored by the fashion world. Last year, Leslie Jones took fashion designers to task for refusing to make her a dress for the premiere of “Ghostbusters,” in which she starred alongside Melissa McCarthy, Kristen Wiig and Kate McKinnon. Her comments set off a debate about whether the refusal had been based on racism, or sizeism, or ageism.

A Google search turns up plenty of Giuseppe Zanotti sneakers called “Nicki,” though as one of Ms. Minaj’s fans pointed out, none appear on the brand’s website.

Giuseppe Zanotti couldn’t be reached for comment on Friday afternoon, but he may find it hard to ignore the furor. The last photo posted to the brand’s Instagram page had more than 3,100 comments, many of them using the call-to-battle hashtags.

Ms. Minaj made it clear that she’s not afraid to get her own hands dirty as well. Referring to a planned boxing match between Chris Brown and Soulja Boy, who are in an apparent public feud of their own, Ms. Minaj implied that she would be happy to fight Mr. Zanotti on the same card.

But given the feud’s connection to fashion, perhaps a runway walk-off challenge would be more appropriate?