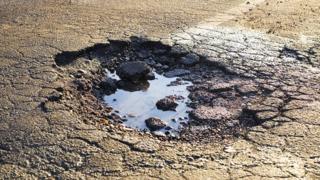 Systems for automatically detecting potholes already exist – but could the data be useful to drivers en route?

Carmaker Ford has said it is experimenting with technology to detect potholes and warn drivers of their locations.

Cars equipped with cameras could constantly scan roads during journeys, with resulting data on potholes displayed on other drivers’ dashboards.

The idea is being tested at the firm’s research centre in Aachen, Germany.

One expert said altering routes to avoid potholes might not always be possible.

“A virtual pothole map could highlight a new pothole the minute it appears and almost immediately warn other drivers that there is a hazard ahead,” said Uwe Hoffmann, a research engineer at Ford.

“Our cars already feature sensors that detect potholes and now we are looking at taking this to the next level.”

Pothole-sensing technology has been in development for some years now, says Toby Breckon, a computer vision expert at Durham University.

“I’m pretty convinced that the pothole sensing is good – though I would imagine with any pothole detection there may be issues with snow and ice,” he told the BBC.

The real question is what is done with the data, he says. “At the moment, your sat-nav picks up traffic and road hazards like blockages – that’s very common – could this be an extra layer to that?”

In 2015, Jaguar Land Rover said it was working on a system to automatically gather information about potholes from cars fitted with sensors.

Nottingham Trent University has also been developing a smart system to do this.

Plus, earlier this year, City of York Council announced it would fit pothole detecting cameras to refuse vehicles in order to gather road surface data and better target repairs.

Some Ford models already use sensors to detect potholes and adjust the car’s suspension in an effort to reduce vehicle damage.

Dr Breckon pointed out that encouraging drivers to avoid all routes with potholes might cause congestion in other areas – and there could be cheaper ways of solving the problem, such as improving road surfaces.

“Anything that helps to avoid pothole damage, great, let’s support that – but let’s also think about road maintenance being properly funded,” he told the BBC.

“Is it over-engineered? Maybe. I’d be interested to know how much money has been diverted into researching this technology while local authorities are cash-strapped.”

The RSTA said there was a 16% drop in funds for council highway maintenance in 2016. It estimates it would cost £11.8bn to clear the backlog of pothole repairs in the UK alone.

Pothole damage affects 39% of drivers, according to an AA survey published in March last year.