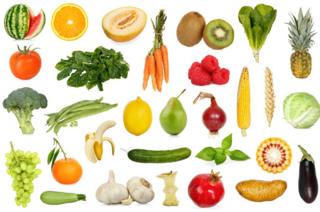 Eating loads of fruit and vegetables – 10 portions a day – may give us longer lives, say researchers.

The team also identified specific fruit and veg that reduced the risk of cancer and heart disease.

The analysis showed even small amounts had a health boon, but more is even better.

A portion counts as 80g (3oz) of fruit or veg – the equivalent of a small banana, a pear or three heaped tablespoons of spinach or peas.

What counts as five-a-day?

The conclusions were made by pooling data on 95 separate studies, involving two million people’s eating habits.

Lower risks of cancer were linked to eating:

Lower risks of heart disease and strokes were linked to eating:

Harriet Micallef, from Chippenham, says she often manages eight to 10 portions a day and has multiple portions of spinach every day.

She told the BBC: “I have a lot, I don’t ever have a meal without veg or salad so eight to 10 portions is a regular thing.”

She starts her day with a veg-packed omelette containing spinach and sometimes avocado or tomatoes.

Harriet’s salad-based lunch is also packed with a mix of veg and her evening meals tend to be stir fries or stews.

Snacks during the day include blended fruit smoothies or peppers dipped in hummus.

She added: “It’s definitely healthy, if you’ve got loads of colours on your plate then you’re pretty much okay.”

The results, published in the International Journal of Epidemiology, also assessed the risk of dying before your time.

Compared with eating no fruit or veg a day, it showed:

The researchers do not know if eating even more fruit and veg would have even greater health benefits as there is little evidence out there to review.

Dr Dagfinn Aune, one of the researchers, said: “Fruit and vegetables have been shown to reduce cholesterol levels, blood pressure, and to boost the health of our blood vessels and immune system.

“This may be due to the complex network of nutrients they hold.

“For instance, they contain many antioxidants, which may reduce DNA damage and lead to a reduction in cancer risk.”

However, many people struggle to even eat the five a day (400g) recommended by the World Health Organization.

In the UK, only about one in three people eats enough.

Heather Saunders, 24 and from Oxford, routinely manages nine or 10 portions a day since becoming vegan.

She has two pieces of fruit with breakfast, a “massive pot” of roasted vegetables at lunch and then at least four vegetables in curries or chillies in the evening.

She told the BBC: “It is about making a conscious decision, I feel fuelling myself with plant-based foods is a more healthy way to sustain myself.”

Her tips for anyone trying to eat more is to do it gently: “Maybe decide to have one or two meat-free days a week and phase more veg in, I quite like a sweet potato curry with spinach and chickpeas.”

Dr Aune said the findings did not mean the five-a-day message needed to change.

He told the BBC: “There are many different considerations if changing policy, it’s not just the health effects – is it feasible?

“But our findings are quite clear in that they do support five a day, but there are even some further benefits for higher intakes.”

Dr Alison Tedstone, chief nutritionist at Public Health England, said: “The five-a-day target is the foundation of a healthy balanced diet and is an achievable way to help prevent a number of diseases.

Jonathan Shorney asked: “I eat a lot of apples, but that amounts to a lot of sugar. Could that amount of sugar be harmful?”

Sugar seems to have become public enemy number one in the past few years. But it is important to remember the “war on sugar” is actually a “war on free sugar”.

This includes sugars added to food as well as honey or those liberated in making fruit juices.

However, this does not include any naturally occurring sugars in fresh fruit and vegetables and the World Health Organization says “there is no reported evidence of adverse effects of consuming these sugars”.

Mike asked: “Do pulses contribute to the 10?

Yes they do. All kinds of beans from kidney to cannellini as well as lentils count as a single portion according to Public Health England.

Gary Kruger asked: “Should fruit and vegetables be heavily subsidised by the government to encourage further consumption?

This is not being seriously considered, but something kind of similar is happening.

Rather than making the healthy stuff cheaper, a sugar tax will make sugar-sweetened beverages more expensive with the aim of shifting buying habits.

There is no VAT on fruit and veg, but the British Medical Association has called for the government to go further and use the proceeds of a sugar tax to discount fruit and veg.

However, it is not clear how big a health impact there could be without knowing who it would be for (everyone or just the poor), how big the discount would be and then how that would change shopping habits.

Harriet, who started cooking family meals at the age of 12, thinks more should be done to get children eating more.

“I think it comes from schooling and the traditional British meat and two veg.

“I think if you teach children to always have something green on their plate in addition then they’ll naturally start having more.

“There’s just so many different veg that people don’t have like bean sprouts and chard.”

Not all of the 95 studies that were analysed fully accounted for other aspects of lifestyle, such as exercise levels, that could also play a role in prolonging lives.

However, Dr Aune said the conclusions were “quite robust”.