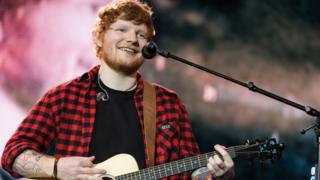 Ed Sheeran’s promoter has said Google must do more to stop secondary ticket sales for the singer’s gigs.

Stuart Galbraith called for the change after Google adverts pointed fans towards secondary site Viagogo, where tickets for Ed Sheeran’s tour were being sold at inflated prices.

“Google needs to bow to pressure and stop taking money for tickets which are sold on the secondary market,” he said.

Google said it had a set of strict policies on which ads it allows.

Tickets for Ed Sheeran’s ‘Divide’ tour started appearing on Viagogo within minutes of them being released.

“Ed and I have a strong aversion to secondary ticketing,” Mr Galbraith told BBC Radio 4’s You & Yours programme.

“We put up lots of measures to try and stop the secondary ticketing market when his tour tickets came out on Saturday. The vast majority of secondary sites adhered to our threats of prosecution but Viagogo did not.”

The BBC has contacted Viagogo by email for comment but has yet to receive a response.

Mr Galbraith’s comments follow research by Fan Fair Alliance, a campaign group set up by artists and their managers.

It searched Google for 100 popular UK tours, typing in the artist’s name and the word “tour”.

The group discovered 77 times out of 100 a secondary website had paid to be the top result of the Google search.

“We’ve known for a while that this is Viagogo’s main marketing route to the consumer and we know that they spend a lot of money to get to the top of Google’s ad search,” said Adam Webb from Fan Fair Alliance.

“The part where it says ad is a very small box and in the marketing by Viagogo it says ‘official site’. It is very confusing for consumers,” Mr Webb said.

Ed Sheeran previously warned that anyone who bought from secondary ticketing sites would not be allowed into his gigs.

Mr Galbraith said: “If we can identify that those tickets have been bought on the secondary market then there’s every chance their admission will be refused.”

The re-selling of live music tickets for profit is not against UK law.

This means companies including Viagogo can pay for ad space on search engines like Google.

Google said it does not allow fraudulent or misrepresentative ads and when it discovers ads that break its policies it quickly takes action.