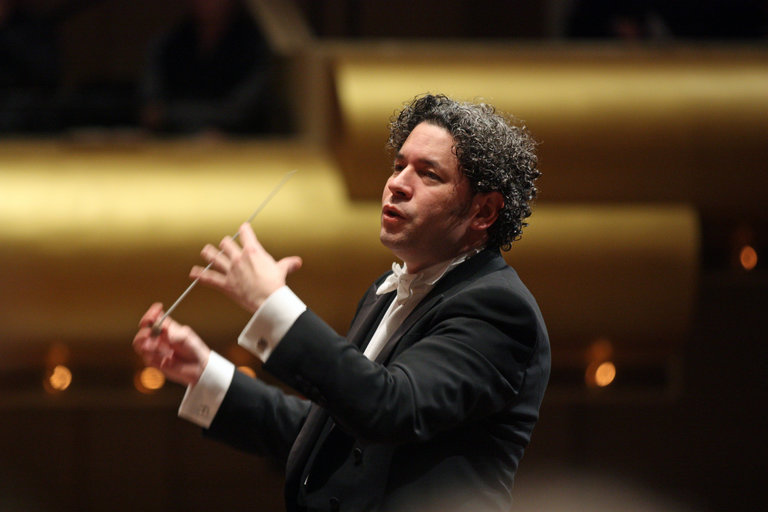 “We must stop ignoring the just cry of the people suffocated by an intolerable crisis,” Gustavo Dudamel, the music director of the Los Angeles Philharmonic, said of his native Venezuela.

Gustavo Dudamel, the star conductor, issued his strongest statement yet about the violent political unrest convulsing his native Venezuela, saying on Thursday that “we must stop ignoring the just cry of the people suffocated by an intolerable crisis.”

Mr. Dudamel, who has sometimes faced criticism for failing to distance himself from the Venezuelan government as the nation has spiraled into political and economic chaos, spoke out after a young musician was reportedly killed in street protests.

But as Venezuela has slipped into a crisis in recent months, he has begun speaking more explicitly, saying, in the most recent statement, that “democracy cannot be built to fit the needs of a particular government.”

The country faces dangerous shortages of medicine and food, and its unpopular president, Nicolás Maduro, has sparked mass protests in the streets, which have met with repression by government security forces. At least 30 people have died in the protests. News agencies report that one of the most recent protesters to be killed was Armando Cañizales, a young musician.

Here is Mr. Dudamel’s statement, in its entirety:

My entire life has been devoted to music and art as a way of transforming societies. I raise my voice against violence. I raise my voice against any form of repression. Nothing justifies bloodshed. We must stop ignoring the just cry of the people suffocated by an intolerable crisis. Extreme confrontation and polarization cannot seize common conscience and peace, constituting borders and barriers to understanding and peaceful and democratic coexistence. Historically the Venezuelans have been a fighting people but never a violent one.

For democracy to be healthy there must be true respect and understanding. Democracy cannot be built to fit the needs of a particular government or otherwise it would cease to be a democracy. The democratic exercise involves listening to the voice of the majority as the ultimate bulwark of social truth. No ideology can go beyond the common good. Politics must be exercised from conscience and in the utmost respect of the Constitution, adapting itself to a young society that, like the Venezuelan, has the right to reinvent itself through the healthy and unobjectionable democratic checks and balances.

Venezuelans are desperate for their inalienable right to well-being and the satisfaction of their basic needs. The only weapons that can be given to people are the necessary tools to forge their future: books, brushes, musical instruments; in short, those that embody the highest values of the human spirit: good, truth and beauty.

I urgently call on the President of the Republic and the national government to rectify and listen to the voice of the Venezuelan people. Times cannot be defined by the blood of our people. We owe our youth a hopeful world, a country where we can walk freely in dissent, in respect, in tolerance, in dialogue and in which dreams have room to build the Venezuela we all yearn for.

It is time to listen to the people: Enough is enough.