“We have these people sending us their children to get healthy,” said Dave Aronberg, the state attorney for Palm Beach County, who established a sober homes task force to combat the problem, “and they are leaving in ambulances and body bags.” 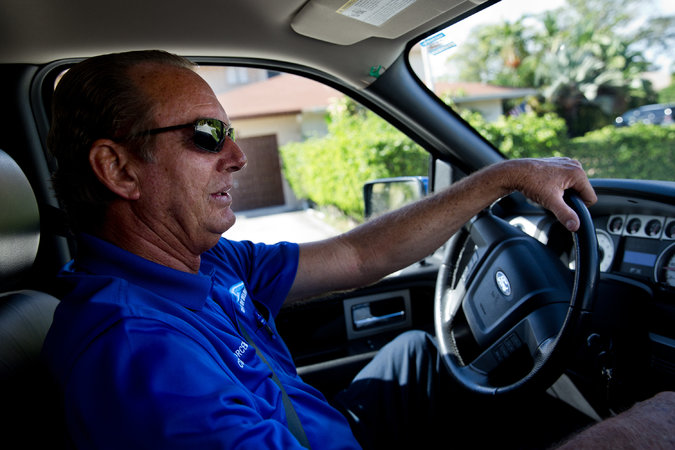 Marc Woods, a housing inspector for the city, in January. A drive with him revealed the extent of the sober-home sprawl.

When several inpatient treatment centers, drawn by low taxes and warm weather, opened their doors here to addicts more than 35 years ago, it seemed a godsend to substance abusers. Soon, other centers, mostly legitimate, followed. Recovering addicts lived together after treatment in supervised apartments or single-family homes. The residences were known as sober homes, where addicts could recover far from temptations and drug-abusing friends back home.

Addicts attended outpatient therapy, found jobs and buoyed each other as they waded back into everyday life. Many stayed in Delray Beach, drawing more addicts as word spread. In time, Narcotics Anonymous and Alcoholics Anonymous meetings were almost as easy to find as a cup of coffee; today there are at least 150 meetings a week. Experts called the treatment and sober house system the Florida Model, and it spread quickly across the country.

Hundreds of sober homes — some reputable, many of them fraud mills and flop houses for drug users — sprawl across Delray Beach and several surrounding cities. No one knows exactly how many exist because they do not require certification, only city approval if they want to house more than three unrelated people. Hoping for a fresh start, thousands of young addicts from outside Florida wind up here in places that benefit from relapse rather than the recovery they advertise.

“The state of Florida licenses haircutters, yet we don’t license any of the people involved in the supervision of young adults suffering from substance abuse disorder, far away from home, without means,” said Cary Glickstein, the mayor of Delray Beach. “These desperate patients and family members are getting exploited and abused.”

Why did this happen? For one thing, Florida, a state famous for insurance fraud, disdains regulation and was ground zero for the prescription drug epidemic. But the proliferation of fraudulent sober homes was in part also the result of two well-intentioned federal laws. First came a 2008 law that gave addicts more generous insurance benefits; then the Affordable Care Act, which permits adults under 26 to use their parents’ insurance, requires insurance companies to cover people with pre-existing conditions and allows for multiple drug relapses.

The result was a whole new category of young addicts with access to insurance benefits. This gave rise to a new class of abusive operator, as painstakingly chronicled in The Palm Beach Post: the corrupt sober house owner. Many drug treatment centers — which also treated inpatients — started paying sober-home owners “bonuses” from insurance money and fees for referring outpatients to their centers while they underwent therapy, according to law enforcement, a grand jury report and court records.

This is illegal. Sober homes, which are not covered by insurance, can get thousands of dollars a month for each recovering addict, in large part from treatment providers, law enforcement and city officials said.

Much of it goes into the owners’ pockets. But it is also used to pay rent so patients can live free and to provide perks that lure patients from other sober houses: manicures, mopeds, gym memberships and, worst of all, drugs. Relapses are welcome because they restart the benefits clock.

Cracking down has proved difficult. Florida does not regulate sober homes, and federal disability and housing anti-discrimination laws offer strong protections to recovering addicts who live in them. Sober houses are categorized as group homes for the disabled. This has complicated arrests, cases and lawsuits, although some treatment centers, lab and sober-house owners in the area have been prosecuted on state or federal charges for patient brokering and money laundering, the result of the Sober Homes Task Force. In some of the worst cases, women were held captive, raped and drugged in sober homes.

Some help may be on the way. After months of sidestepping the issue, Gov. Rick Scott declared an opioid public health emergency in May, freeing up $27 million in federal money for prevention, treatment and recovery. And the Florida Legislature approved a bill that will stiffen penalties for patient brokering and fraudulent marketing.

Few in Delray Beach have escaped unscathed: not the addicts or their parents who send them here, often lured by well-paid recruiters. Not the residents who find overdosed young adults on their lawns. Not the county medical examiner who, overwhelmed by opioid deaths, stopped doing autopsies on car accident victims last year. And not the city, which has spent millions of extra dollars on the surge of heroin addicts from out of state.

Addicts vs. the ‘Bad Guys’

Sober homes here are everywhere. They are in wealthy beach-side enclaves, middle-class strongholds and gentrifying neighborhoods. Sometimes whole apartment buildings are converted into sober homes. The houses can be gorgeous; they can also be grim. Most of those are in low-income neighborhoods, where property is cheap, drug dealers plentiful and residents less inclined to make a fuss.

Emanuel Dupree Jackson Jr. lives in a largely Haitian and African-American neighborhood among people who got knocked sideways by drugs, mostly crack, long ago. Like him, many had been arrested or had landed in prison for dealing. Or they withered away after using. Or they got killed for tangling with the unforgiving rules of street dealing.

The last thing this area needed was hundreds of white “hard-core junkies” from out of state, he said. But sober houses opened anyway, attracted by cheap housing and residents who are wary of authority.

Dealers soon sized up their new customers and stocked up on the drug of choice: heroin. Relapses and overdoses skyrocketed, particularly after potent synthetic opioids like fentanyl and Carfentanil hit the street. But addicts, who seldom have drugs on them, get a trip to the hospital. Dealers, if caught, get a trip to jail.

“My cousin will sell the drugs to them and go to jail, and the white people who are in the sober homes are protected,” said Mr. Jackson, 33, who runs a nonprofit for low-income youth. “But what came first? You put the heroin users here, with poor people, with a history of drugs and violence, with no regulation.”

“They are known addicts,” he added, “but we are still the bad guys.”

Closer to the beach, in Osceola Park, a gentrifying area, residents are no less upset. It’s not drug treatment they oppose — it’s the mind-boggling number of poorly run sober houses.

They find needles in their yards. The town soundtrack is unrelenting siren wails. With six to 12 people living in a house, noise is unavoidable. Property crime last year was up 19 percent from 2015. The “new homeless” — as the police call addicts who get booted from sober houses once insurance money runs out — are living on the streets.

“We are trying to recover from the recovery homes,” said Benita Goldstein, who runs a bed-and-breakfast that sits behind a sober home and bought another house here simply to shut down the sober home that occupied it. “The affliction is everywhere.”

Lynn Korp lives a stone’s throw from Delray’s popular main street, Atlantic Avenue, which hums with packed restaurants and galleries. One morning, Ms. Korp, an artist, spotted a man on the ground behind her house. A needle jutted from his arm.

“He was deceased,” she said, still troubled by the memory. “I don’t even know what that gentleman’s name was, and I still think about his mother and siblings.”

Residents blame the city, in part, for the sober-house sprawl. Delray Beach officials are so afraid of lawsuits that they are paralyzed, Ms. Goldstein said.

Mayor Glickstein, who was just re-elected, said that federal anti-discrimination laws protecting people in recovery are so strict that cities that try to curtail sober houses routinely lose big money lawsuits. It happened in nearby Boca Raton.

One remedy is in the works. In November, two federal agencies issued guidance on the problem, granting cities some wiggle room to use zoning and other tools to control the proliferation. The city is now drafting an ordinance that it hopes will do just that.

“The laws were frankly never intended to be used for the warehousing of people suffering substance abuse disorders,” Mr. Glickstein said. “They have been turned on their head for profit.”

A Pipeline to Relapse

For many addicts, living in sober homes was a pipeline to relapse. Amanda Ramalho, a drug rehab veteran from Lowell, Mass., chose a reputable treatment center in South Florida in 2015 — a place far from the snow, where new beginnings didn’t seem so far-fetched.

But the sober homes, meant to ease her recovery, did the opposite.

“Everyone was always high, and when people are in there getting high, you run around with them getting high,” said Ms. Ramalho, 26, who returned home in 2016 and is now sober after spinning out of control in Delray Beach. “It’s supposed to be the biggest recovery capital, but it’s really the biggest relapse capital.”

She overdosed three times. Twice she wound up in the hospital. Once, she nearly died after the sober house supervisor brought in heroin, she said, which is not uncommon in some sober homes. A friend well versed in overdose triage saved her with CPR because calling fire rescue is a last resort. It gives paramedics and police officers entree into the sober houses, which could lead to code violations or arrests if drugs are found.

“Usually people wake up,” she said. Inside a sober house, “they are ready for people to overdose.”

Even the white vans, called “druggie buggies,” that take people to therapy are not off limits. Ms. Ramalho said she looked back during one ride and saw a man overdosing. They changed plans: “We had to carry him into the hospital.”

Paramedics and firefighters, like the ones at Delray Beach Fire Station 1, see it all. During peak periods, they can race to 20 overdose calls in a day.

“You look at their IDs,” said Kris Scheid, 42, a driver engineer. “And they are all clean-cut. Then you look at them now, and they are destroyed. You say, ‘Is this the same person?’”

Sometimes, they treat the same person several times in a single day. Or they rescue several people in a single place who had shared a bad batch. Almost always the victims are under 26, white and from out of state. Around town, they are called the “zombies.”

“You throw a rock in all four directions and you can hit someone who had OD’d, will OD or did heroin today,” said Capt. Chris Zidar, 44.

Neil de Jesus, a former fire chief who is serving as acting city manager, said he was so worried about the toll of so many overdoses and deaths that he ordered routine counseling for firefighters and paramedics. The police department brought in counselors, too.

“I have more than 30 years in the business,’’ he said. “My firefighters have seen more death in two years than I have seen in my entire career.”

With so much work for emergency personnel, the police and fire departments have been on a hiring spree.

At the morgue, the medical examiner, Dr. Michael D. Bell, saw the jump in opioid deaths firsthand in 2015. The number climbed even more sharply last year, when ultra-potent heroin laced with synthetics hit the streets. His workload increased 25 percent both years. Last year, 596 people died from opioids in the county. They added a pathologist. Now he needs two more.

Even he, a man used to the constancy of death, said he was taken aback.

“It has really surprised me, how many people die,” Dr. Bell said. “It truly is an epidemic much like when people were dying of AIDS, at first.’’