Home Lifestyle Art Heads Up: In Hawaii, Contemporary Art Gets Its Moment in the Sun

According to Paul Theroux, the renowned American travel writer based on Oahu, a distinguishing feature of contemporary Hawaiian art is “strong color, the vividness of color, shown in marine sunlight.” He added: “You won’t find a gloomy painting, or a mist, or anything like a Whistler ‘Nocturne,’ or rain for that matter. It is always a play of sunlight and a palette that is overwhelmingly aqueous.”

During “POW! WOW! Hawaii,” artists organize concerts and installations at Lana Lane Studios, an artist collective, also based in Kakaako. 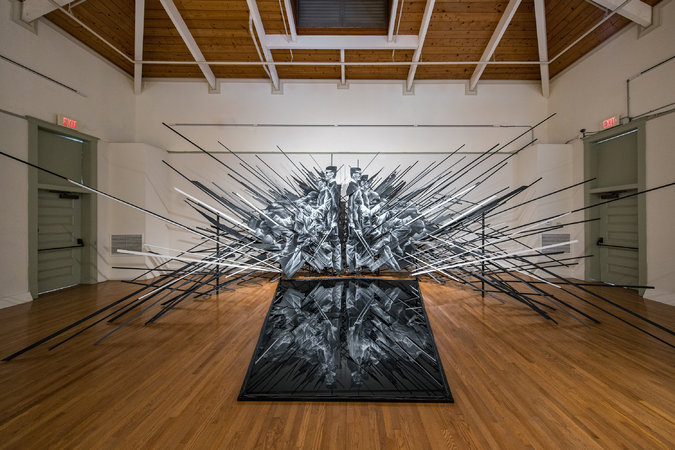 An installation by Aaron Li-Hill.

The new wave of artists who are exhibiting in Hawaii often see their work through the prism of its natural resources or traditional crafts. One of the finest examples of classical Polynesian sculptures and textiles in the islands was assembled by Laurance S. Rockefeller, for his Mauna Kea Beach Hotel on the Big Island, in the 1960s. The weekly tour of the thousands of objects in its open galleries overlooking the ocean provides visitors with a well-rounded view of the region’s most significant crafts.

“There is a common thread among contemporary young artists,” Mr. Jensen explained, “which is a concern for land and the environment.”

Kapulani Landgraf, Maikai Tubbs and Sean Connelly are all well-known Hawaiian artists who mostly focus on environmental themes. Mr. Tubbs volunteers with Sustainable Coastlines Hawaii and 808 Cleanups, two groups that remove plastic debris from Hawaiian beaches. “The importance of the biennials is to highlight the quality of work of Hawaiian artists who don’t play to the notion of the idealized paradise cliché,” said Mr. Tubbs, who in 2016 participated in “Plastic Fantastic?” an exhibit at the Honolulu Museum of Art’s Spalding House.

Contemporary art can prosper only if there are enough venues to show and sell it. Many artists and curators in Hawaii bemoan the shortage of private galleries, especially ones that aren’t just focused on fast-selling realist landscapes of little craft or value.

Neida Bangerter, the gallery director of the Maui Arts and Cultural Center, said her art space had shifted people’s perceptions of what art could be because artists there took risks. Through March 19, the center is exhibiting human-scale tunnels made of pure silk threads by the Japanese master weaver and zero-waste advocate Akihito Izukura. East Hawaii Cultural Center, in Hilo on the Big Island, has been engaging local artists in exploring themes such as homelessness and Hawaii’s sacred sites, in a variety of media.

Even as Hawaiian contemporary art is in the spotlight, Mr. Theroux said it was important to remember that Hawaii’s great traditions had always been an integral part of its contemporary scene. “The great art of Hawaii is performance: hula, dance and music,” he said. “And you could say that surfing is also artful performance: a dance on water.”