Mr. Grotjahn is represented by four dealers — including the heavyweight Larry Gagosian — without the promise of exclusivity they would obviously prefer.

He has direct relationships with his collectors and even occasionally sells to them right out of his studio, bypassing his dealers. And his tight control over both the quantity and sale of his paintings means that he can help affect how much of his work is sold at auction, which can lead to higher bidding.

“He’s the most important artist of his generation,” said the media mogul David Geffen, who owns six Grotjahn paintings and recalled recently losing out on one that sold for $22 million.

“I have bought works out of his studio; I’ve also bought works privately,” he added, referring to dealers. “I bought a sculpture of his for the Museum of Modern Art. He tries to sell them to people who are collectors rather than investors.” 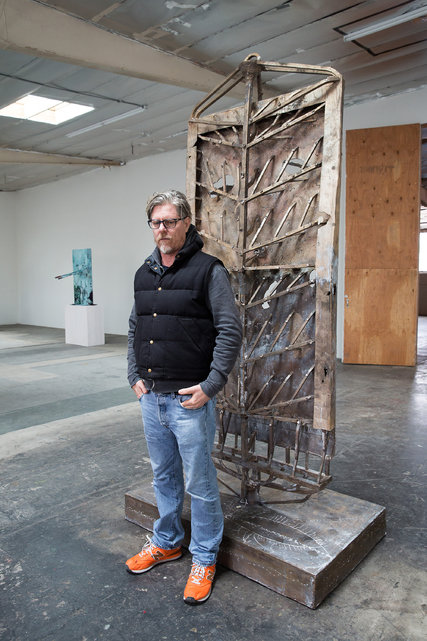 Mr. Grotjahn in his downtown Los Angeles studio in 2014.

When collectors buy his work, Mr. Grotjahn expects them to keep it or to donate it to a museum; he tries not to sell to buyers who are likely to resell works for profit.

Mr. Grotjahn, an abstract artist, had his first solo shows with Blum & Poe, then a young gallery in Santa Monica, in 1998 and 2000. He sold only one painting from the second show, for $1,750, and called that experience “a whipping.”

Today, museums with Mr. Grotjahn’s artworks in their collections include MoMA, the Solomon R. Guggenheim Museum, the Whitney Museum of American Art, the Museum of Contemporary Art in Los Angeles and the Los Angeles County Museum of Art.

“There was always a conscious conversation about the importance of placing pictures in museums and in great collections,” said Timothy Blum, a founder of Blum & Poe. “It becomes a pretty precise methodology.”

The collector J. Tomilson Hill owns four Grotjahn “Butterfly” paintings — bold geometries, with lines radiating from a central axis. Mr. Hill said that when he was chairman of the Hirshhorn Museum and Sculpture Garden in Washington the artist asked him to donate one of his “Face” paintings, which Mr. Hill did in 2012. “I said, ‘I’m happy to buy one, but I want one for myself, too,’” Mr. Hill said.

Mr. Grotjahn may not forgive Marie-Josée Kravis, MoMA’s president, for selling a work that he had understood was going to MoMA. The work was one of three “Circus” paintings featured in the museum’s 2014 “Forever Now” contemporary painting survey; the other two were donated by their owners, Donald B. Marron and the billionaire investor Steven A. Cohen — also MoMA trustees.

“Both the gallery and the artist were very disappointed with this situation,” Mr. Blum said.

Ms. Kravis said in an email: “I can only strongly assert that never have I sold a painting promised to MoMA from any artist.”

While most artists prefer to be far removed from the auction business, Mr. Grotjahn weighs in on how his pieces are displayed and described in auction catalogs, and he tries to have a say in who ends up buying them.

“Ultimately, he’s the decision maker,” said Loic Gouzer, Christie’s co-chairman of postwar and contemporary art in the Americas. “He wears the pants in the relationships he has with his galleries.”

Those galleries — which also include Anton Kern in New York and Shane Campbell in Chicago — may chafe, but they have accepted his independence.

“Artists like Mark — they run their own show, as they should,” Mr. Blum said. “They’re the ones who’ve taken all this risk and stared into that void.”

At the same time, some in the art world are concerned that Mr. Grotjahn’s prices have upstaged his artwork.

“I would be a fool to look at success by the dollar numbers,” said Christoph Gerozissis, senior director of Anton Kern. On the other hand, he added, “I would also be a fool if I would ignore this.”

Ms. Philbin said Mr. Grotjahn was due for a major museum exhibition “so that people can see the remarkable trajectory of his career in the work, and not just in the prices.”

Mr. Grotjahn is not the first market-savvy artist to wrest control of his legacy; his iconoclastic predecessors include Damien Hirst and Jeff Koons, Urs Fischer and Richard Prince. “They see bigger, they go bigger,” Mr. Gouzer said.

Part of the reason Mr. Grotjahn has exercised such agency is because there are waiting lists for his paintings and success gives an artist leverage.

While some artists stick with a winning formula, Mr. Grotjahn keeps changing up the work — from his large-scale “Face” paintings to his masks with toilet-paper-tube noses — so that the market is forced to readjust. And he does not create an oversupply of work, ensuring continued demand.

“The art world loves nothing more than not being able to have access to something,” said Sara Friedlander, Christie’s head of postwar and contemporary art in New York.

Born in Pasadena, Calif., Mr. Grotjahn received his M.F.A. from the University of California, Berkeley, and ran an art gallery in Hollywood. He is the consummate insider in the Los Angeles art world, particularly since he joined the board of the Museum of Contemporary Art three years ago.

“He has a very strong voice, he’s very respected and he’s been extremely generous,” said Philippe Vergne, that museum’s director.

“Mark has seen the demand and the desire around his work increasing over the last 10 years,” Mr. Vergne added. “He has learned to benefit from it and also have a distance from it and keep a cool head around it.”

Mr. Grotjahn’s work emerges out of other Los Angeles artists like H. C. Westermann, Mike Kelley and Richard Hawkins, and he has supported underrecognized local talents like Ivan Morley, Evan Holloway and Magdalena Suarez Frimkess. “He’s building on a tradition of idiosyncratic, individualistic art making,” said the Los Angeles dealer David Kordansky, “with a heightened attention to the physicality of materials.”

A former binge drinker who used to play poker for income, Mr. Grotjahn has settled down with his wife, the painter Jennifer Guidi, and their two young girls (though he still frequently posts quirky — sometimes racy — images on Instagram, where he has nearly 25,000 followers).

While some artists have caught fire and then flamed out, art experts say Mr. Grotjahn is likely to endure because his talent is real and significant. Mr. Gouzer likened him to Willem de Kooning; Mr. Mugrabi, to Mark Rothko.

And while selling directly out of his studio — essentially doing an end run around his dealers — is traditionally taboo, some say more power to him.

“Who says he can’t?” Ms. Philbin said. “It’s an unwritten rule, but he’s breaking the rules.”