“This is a critical first step toward delivering relief to Americans who are struggling under this law,” Mr. Ryan said, adding, “This experiment has failed.”

Democrats warned that repeal of the health law would cause hardship for millions of Americans and create chaos in insurance markets and in the health care system, which accounts for about 18 percent of the nation’s economy.

“If we go down this path, we won’t have repeal and replace,” said Representative John Yarmuth of Kentucky, the senior Democrat on the House Budget Committee. “What we’ll have is repeal and repent because we’re going to owe a huge apology to the American people for the damage that we cause.”

Representative Suzan DelBene of Washington, a Democrat, said, “There’s still no plan for what comes next, threatening massive disruption to the entire health care system.”

In the days before the House vote, some conservative Republicans, as well as moderates, expressed discomfort about signing off on the budget blueprint without having a clearer picture of how and when Republican leaders planned to replace the health care law. Nine House Republicans ended up voting against the budget measure on Friday. No Democrats voted for it.

The Times would like to hear from Americans who purchased health insurance under the Affordable Care Act. 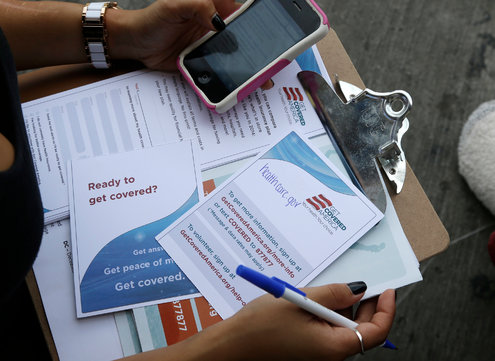 The Senate approved the same measure early Thursday by a vote of 51 to 48. The House and Senate votes this week — essentially procedural steps — represented the first of several moves that Republicans plan to make as they work to unwind the health care law.

In the coming weeks, they say, they will try to devise a replacement, working closely with Mr. Trump and his choice to lead the Department of Health and Human Services, Representative Tom Price of Georgia.

Four committees — two in the Senate, two in the House — will write language repealing major provisions of the 2010 health law. The resulting legislation can be passed with simple majorities in both chambers, and will be immune to a Democratic filibuster in the Senate.

Then, Republicans say, they will pass one or more free-standing bills to replace selected provisions of the Affordable Care Act. In the Senate, where Republicans hold 52 seats, they will need help from Democrats to reach the 60 votes necessary to approve such legislation.

Mr. Trump voiced support this week for repealing and replacing the health care law “essentially simultaneously,” though it remained to be seen if Republicans in the Senate can win enough Democratic support to adopt a replacement for the existing health care law, given the need to reach 60 votes.

In the House debate on Friday, Republicans and Democrats offered wildly differing views of health care and health insurance.

Representative Jason Lewis of Minnesota, a first-term Republican, said he had firsthand experience with the Affordable Care Act.

“Minnesotans have seen their health insurance choices shrink while their premiums, co-pays and deductibles skyrocket,” Mr. Lewis said. “I should know. For the last, in fact, over five years, I’ve been in the individual market, and my own insurance premiums have nearly tripled, and I’ve gone through three insurers. Minnesotans have seen a 50 to 67 percent increase in the premium cost this year alone.”

The House Democratic leader, Representative Nancy Pelosi of California, who helped engineer passage of the health law, defended it on Friday, saying that every American benefited.

“The Republicans are feeding their ideological obsession with repealing the A.C.A. and dismantling the health and economic security of hard-working families,” Ms. Pelosi said. For six years, she said, Republicans have had the chance to put forth an alternative, but “we’ve seen nothing.”

Echoing their colleagues in the Senate, Democrats asked how Republicans planned to go about replacing the Affordable Care Act — a complex, arduous task, as Democrats know from their own experience developing and passing the health law in the first place.

“When you put pen to paper, all hell is going to break loose on your side,” said Representative Peter Welch, Democrat of Vermont.

Democrats also tried to draw attention to what they said would be the devastating consequences of repealing the health care law.

Over and over, after a Republican member spoke out against the law, Mr. Yarmuth offered several data points specific to the member’s home state, including how many people would lose their health coverage.

Republicans, though, were eager to deliver on a central campaign promise. “The public has rendered judgment on this health care law,” said Representative John Shimkus of Illinois.

The differing views among House members on Friday foreshadowed the acrimony that is all but certain in the weeks to come, as Republicans press ahead with their repeal efforts over Democrats’ strenuous objections.

So far, lawmakers have shown some creativity in trying to explain the wisdom — or lack of wisdom — in moving forward with a repeal.

On Friday, Representative Drew Ferguson of Georgia, a freshman Republican, likened the health care law to a goat that had been let loose in a person’s home.

“Now for six years, that goat has been messing in and destroying my house,” he said. “I want to renovate my house, but before I can, I have to get the goat out of the house before it does any more damage. It makes no sense to start fixing up my house until we get the goat out.”

Voting for the measure on Friday, Mr. Ferguson said, would get rid of the goat.