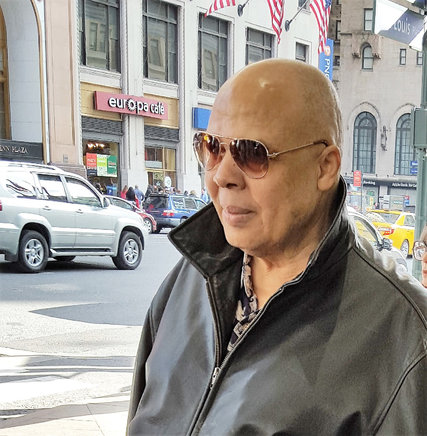 Houston Conwill, a sculptor best known for collaborative site-specific works celebrating African-American culture and spiritualism, died on Nov. 14 in the Bronx. He was 69.

His wife, Kinshasha Holman Conwill, the deputy director of the Smithsonian’s National Museum of African American History and Culture, said that the cause was prostate cancer.

Mr. Conwill, a former seminarian and Vietnam War veteran, assimilated a wide range of genres and forms, among them maps and bowls of earth, to depict memory, heritage and the African diaspora in works that blurred the boundaries between performance and conceptual art.

His memorial to the poet Langston Hughes at the Schomburg Center for Research in Black Culture in Harlem was described as “exquisite” by The Village Voice. Ebony magazine praised his waterfall cascading over the words of the Rev. Dr. Martin Luther King Jr. at the Yerba Buena Performing Arts Center in San Francisco as a “unique tribute.” The critic Michael Brenson wrote in The New York Times in 1989 that his “Poets Rise,” at the Social Security building in South Jamaica, Queens, “may be the best public sculpture installed in New York City this year.”

Mr. Conwill’s works are also on display near the African Burial Ground National Monument at the Ted Weiss Federal Office Building in Lower Manhattan and at the Harold Washington Memorial Library in Chicago.

They are in the permanent collections of the Museum of Modern Art in New York, the Hirshhorn Museum and Sculpture Garden in Washington, the Museum of Contemporary Art in Los Angeles and the Studio Museum in Harlem.

Mr. Conwill frequently collaborated with his sister, the poet Estella Conwill Majozo, who survives him, and the architect Joseph DePace.

“What distinguishes Mr. Conwill’s career is how it combines emotion and politics with historical, visual and architectural research,” Steven Nelson, director of the African Studies Center of the University of California, Los Angeles, said in an email. “Mr. Conwill’s legacy resides in his unique ability to merge ritual, cutting-edge art and rigorous research in the creation of works that reframe African-American identity while inspiring communication and reminding us of our humanness.”

Mr. Conwill said he was “especially drawn to myth, ritual and the transmission of wisdom and culture across continents and generations” as he evolved from painting to performance art, music and movement, wall reliefs, floor installations and sculptures that “awaken the imagination and bring to mind a flood of images, memories and insights.”

Houston Eugene Conwill was born on April 2, 1947, in Louisville, Ky., to Mary Luella Herndon, an educator, and Giles Conwill, a waiter.

After studying in a Benedictine monastery, he enlisted in the Air Force and served in Vietnam as a communications operator, among other assignments, at the height of the war there. He graduated from Howard University in 1973 with a bachelor of fine arts degree and received a master’s in fine arts from the University of Southern California.

He was the recipient of a Guggenheim fellowship and the Rome Prize from the American Academy in Rome.

In addition to his wife, with whom he lived in Manhattan and Washington, and his sister, he is survived by three brothers, Giles, William and Spivey.

Mr. Conwill’s best-known work may be his terrazzo and brass floor design at the Schomburg Center, part of the New York Public Library. It is a memorial both to Langston Hughes, whose ashes are buried in a book-shaped urn within the design, and to Arturo Alfonso Schomburg, a historian and bibliophile whose collection became the basis for the center named in his honor.

An allegorical dance floor, the work maps the African diaspora and features verses from Hughes’s poem “The Negro Speaks of Rivers.” Unveiled in 1992, the work, titled “Rivers,” includes the poem’s last line: “My soul has grown deep like the rivers.”

In 1989, Mr. Conwill exhibited “The Cakewalk Humanifesto: A Cultural Libation,” a large window etched like a dance floor, at the Museum of Modern Art. The work evoked a dance by slaves that began as a mockery of their white masters. Overlaid was a map of five Southern cities, including Tuscumbia, Ala., the birthplace of Helen Keller, whose blindness, one critic wrote, protected her from color-line prejudice.