Home Lifestyle Art How Much Silence Is Too Much? I Found Out

Walking into “Synthetic Desert” is like entering a vault. There is a series of doors, and the final chamber feels pressurized, the air still and dense.

I walked up a ramp into the silence and waited for nothing to happen. Every movement made noise, so I gave up trying to find a comfortable standing position and sat down.

I focused on the room, which evokes the light before dawn, with a smear of sky painted across the wall and ceiling. No border is visible between the two, and there is no horizon or distance reference point.

Deprived of stimuli, my ears got hungry fast, and quickly recalibrated themselves. I could hear a thin, high roar inside my head. John Cage was once told that this was the sound of the nervous system at work.

Staring into the seemingly infinite space for a while had a similar effect on my vision. My eyes discovered, or invented, some entertainment for me: The colors of the room split apart, from purple into blues and pinks.

I tried to quiet my breaths, and got to the point where I wasn’t sure if I heard them or felt them, or if there were any difference. The nerve signals of an ache in my foot seemed like actual noise, which gradually amplified into an inaudible scream and made me change positions. The sound of my legs shifting came from a distance.

I think this was about 20 minutes in. To preserve Mr. Wheeler’s lighting design, no cellphones or cameras are allowed, and watching a timer was decidedly not the point.

A low sound — maybe blood flowing through my vessels, or maybe part of the audio Mr. Wheeler has subtly incorporated into his design — became prominent. I found I could tune my hearing away from it, though, and began to hear other things — “noises” is not the right word. These were so soft I couldn’t be sure they were real: a wind blowing on the far side of a mountain; a jet flying high above another continent.

Around the 30-minute mark, the light glowing from beneath the acoustic cones on the floor intruded on my vision, their spiky pattern seeming to climb the wall.

The room was unchanged, but my senses were operating independently of my mind. I watched inky patterns scroll across the wall: a hallucination, maybe, or some neural process I usually wouldn’t notice, a corporeal software update.

In such a deadened room, a body bursts with life, spilling it out through every sense. I felt enraptured and paralyzed, as if I were a disembodied mind seared in the void, listening to a recording of silence played at top volume.

Then a door opened, and a man poked his head in, a worker for the museum who’d come in earlier than expected.

I couldn’t focus on him, and thought he might be unreal. He looked uncertain, then closed the door and locked it. Those sounds came to me as if through a tunnel.

The room’s intensity, which had built up so slowly, dissipated quickly after that, like an airlock unsealed. In another couple of minutes I stood, and left.

Out on the street, everything seemed louder, which was no surprise. It’s all hard surfaces and reverberation, concrete and cars. But I could articulate each part of the city’s soundscape.

I tracked three simultaneous conversations on the No. 5 train, along with the crinkle of a candy wrapper and the falling pitch of the wheels on the tracks. The broken loudspeaker on a subway platform barked, harsher than before. Everyone, including me, was carrying some device that oozed sound of its own.

Walking on the sidewalk, I got a lot of funny looks. My mouth was open, I realized. And I was staring too much. 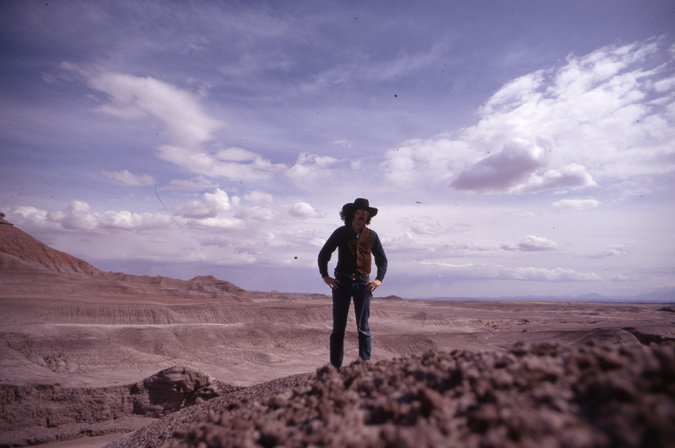 Doug Wheeler in the Painted Desert in Arizona, circa 1970.

Credit
Courtesy of the artist