Mr. Mingus knew him first as Sam Rogers or Steve Rogers, the family surname. Even then, Mr. Mingus said in an interview this week, “He could walk into a room with a typewriter and not leave until he finished a play. No revisions, just typing.”

When Ralph Cook, a waiter at the Village Gate, started the Theater Genesis at St. Mark’s Church-in-the-Bowery in 1964, he gave Mr. Shepard his first break — a pair of experimental one-acts that used disjointed dialogue to “change the audience’s cognition,” Mr. Mingus said.

The Village Voice loved it, and Mr. Shepard was off. In the next six years, he had 18 plays produced — including six that won Obie awards. And then he left the city, only sporadically to return.

“He was blessed with good fortune, always in the right place at the right time,” said Peter Stampfel, who met Mr. Shepard in a pawnshop in the East Village where Mr. Stampfel was retrieving a violin he had pawned to buy amphetamines. 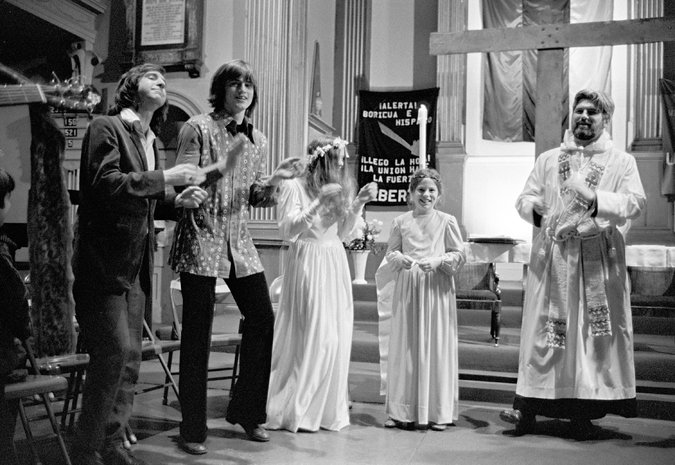 Sam Shepard, second from left, at his wedding to actress O’Lan Johnson at St. Mark’s Church in the Bowery.

Off Off Broadway in the mid-1960s was wide open. An actor in one theater might be designing costumes in a second, then rushing to see a new play in a third. Audiences typically did not pay, and sometimes did not show up.

“It was an incredibly exciting time,” said Tony Barsha, a playwright and director who worked with Mr. Shepard at Theater Genesis. “Creativity was just flowing all over the place.’’

“We thumbed our noses at Broadway and Off Broadway because they were so slick and commercial, and what we were doing was just off the wall stuff,’’ he added. “Nobody was thinking of art for the ages. Sam was just dashing this stuff off. His early work was just what came out of his head. It had nothing to do with dramatic construction or form or history. I think he was using a lot of drugs at the time, speed mainly. I did the same thing.”

The budget to stage a play at the Judson Poets Theater on Washington Square was $37.50, said Albert Poland, who produced some of Mr. Shepard’s early plays. The budget at Theater Genesis, where Mr. Shepard became a regular, was possibly lower.

“That was the dangerous place,” Mr. Poland said, longingly.

Theater Genesis, said the playwright Murray Mednick, was the most macho of the Off Off Broadway spots, “very interested in street language. There was a lot of turmoil, and out of that came this hard-bitten kind of writing, and Sam was a part of that. But he had a sense of America, of being an American, that translated on the stage.”

When Mr. Shepard took one of his plays to Ellen Stewart, a former clothing designer who started La MaMa Experimental Theater Club in 1962, she didn’t even look at the script: “‘We’re gonna do it, baby,’’’ he recalled her saying.

Mr. Stampfel invited him to play drums in his band, the Holy Modal Rounders, a psychedelic folk group that went on to open for the Velvet Underground, Ike and Tina Turner, Pink Floyd and others. The two shared a taste for drugs and a preference for energy over musical finesse, Mr. Stampfel said this week.

“When we started, he never mentioned writing plays or that he got a grant,’’ Mr. Stampfel said. “We’d mention his name to other people and they’d say, you mean the guy who writes plays?”

With the war raging in Vietnam, and F.B.I. agents storming the apartment on Avenue C looking for subversives, Mr. Shepard avoided the draft by feigning a heroin habit.

When Mr. Shepard married O-Lan Johnson, an actress who appeared in some of his plays, in 1969, Mr. Stampfel and the other Rounders performed and handed purple hits of LSD to guests as they entered.

A year later, shortly after the couple had their first child, Mr. Shepard was playing drums with the band on Bleecker Street, when a journalist came backstage to interview them. The journalist was Patti Smith. “She went straight to Sam, and they went straight to the Chelsea,” Mr. Stampfel said.

“Some people are one-woman men,” Mr. Mingus said. “And some people never figure out which one woman to be with.”

Their public affair, loosely echoed in a play they wrote together, “Cowboy Mouth,” lasted until Mr. Shepard and his wife reconciled and before long left New York for London and Nova Scotia.

By then, the East Village was changing, and Off Off Broadway with it. Mr. van Itallie, Mr. Shepard, Lanford Wilson, John Guare and other downtown writers who started at La MaMa or Caffe Cino found bigger audiences further uptown.

But downtown still had a last bit of theater for Mr. Shepard. In the spring of 1970, he had plays opening at Lincoln Center and in the Village, at the Astor Place Theater. It was a major accomplishment, and most of the downtown crowd celebrated Mr. Shepard’s rise, Mr. van Itallie said.

Joey Skaggs, a street artist and prankster, thought Mr. Shepard needed to be saved. “He was making it,” Mr. Skaggs said.

So for an opening-night prank, he planned to “kidnap” Mr. Shepard and put him on a bus out of town. It was a conceptual joke between friends, Mr. Skaggs said. But when six characters in gangster suits rushed toward Mr. Shepard, he started punching. The joke fell apart. The reviews for both shows were bad.

Mr. Shepard, of course, went on to movie stardom and success as a major American dramatist. His plays became more formal and polished. Caffe Cino, the Open Theater and Theater Genesis folded; La MaMa lives on as a cultural institution. None of the four theaters’ founders survives.

Last October, Mr. Stampfel said, Mr. Shepard called him out of the blue to wish him a happy birthday. The two had largely fallen out of contact.

“I knew he was saying goodbye,” Mr. Stampfel said.