Home Lifestyle Art How Steve Earle Got Back Into Downtown Theater

The initial connection happened through his friend the actor Tim Blake Nelson (“the only Republican I hang out with,” Mr. Earle said), who is on Soho Rep’s board and had recruited him to participate in fund-raising galas.

And Mr. Maxwell, it turns out, is a longtime fan.

“I count Steve among my first heroes growing up, so it’s personal for me,” the playwright said. “I remember driving, right after I got my license, on county roads up in Minnesota, around where I grew up, and listening to Steve on the tape deck. I think he’s the closest thing we have to Woody Guthrie right now.”

Mr. Earle’s latest adventure started conventionally enough when he agreed to write a live score for “Samara” — the setting, a spectral nether-America, felt like a good fit. “But then they got me to read the stage directions at the workshops,” he said recently over a Chinese dinner, talking nonstop while trying to avoid getting crispy beef caught in his long salt-and-pepper beard. 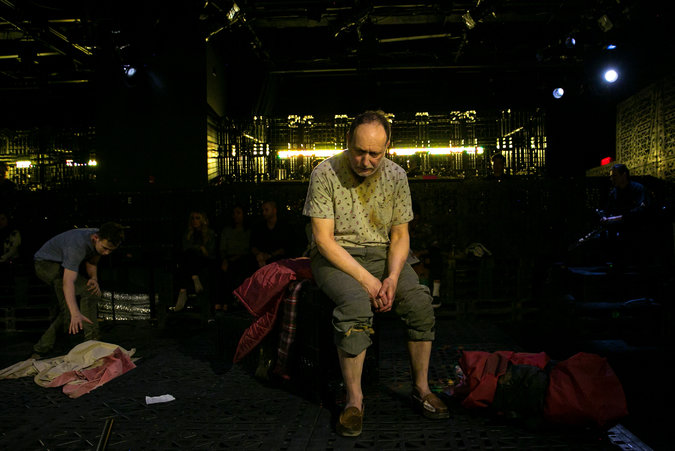 The actor Paul Lazar during rehearsals for “Samara.”

Admittedly, Mr. Earle is not entirely new to the stage. As an anti-death-penalty activist, he appeared in the documentary play “The Exonerated” Off Broadway and wrote the play “Karla,” about Karla Faye Tucker, a woman executed in Texas in 1998. Mr. Earle created a theater company, BroadAxe, in Nashville for the purpose of putting on “Karla,” and ended up running it for four years.

He relocated to New York in 2005 partly so he could see more shows. “We bonded over — I think at the time it was Mark Rylance’s ‘Twelfth Night,’” Ms. Benson said. “He’d seen it, like, three times. We had all of these really robust conversations around theater.”

This fan of “Hamilton” (which he’s also seen three times) and “South Pacific” knows his way around the Off and Off-Off scenes, too. He kept going back to how much he’d loved the musical “Hadestown,” for instance, and says it was an honor to do “Samara” because “it’s a Richard Maxwell play.” He added, “He’s kind of like [Richard] Foreman, except Foreman was all about action and motion, and he’s all about language, which attracts me.”

As you might expect from someone with his eclectic résumé, Mr. Earle has a quicksilver mind and his conversation ricochets from baseball (Yankees all the way) to his impatience with sung-through musicals (“You end up with songs designed to be conversations to move the plot along, and that weakens them because they have to carry the whole story”).

Despite his myriad activities, he comes across as versatile rather than scattered. “I had no idea what a disciplined, hard-working person he is,” the singer-songwriter Shawn Colvin, with whom he made last year’s album “Colvin & Earle,” said over the phone. “After he got in recovery [in the early 1990s], he really felt he had a purpose in this world, that he is here for a reason. I think his feeling is to do what he does, and do a lot of it.” (This extends to a busy romantic life and seven marriages.)

Over the years, theater has always remained a constant in Mr. Earle’s life. Even at his busiest he’d always find the time to catch shows. His next step is to make musicals of his own: He’s working on a stage adaptation of his 2007 album “Washington Square Serenade” and has been talking with “The Wire” creator David Simon about a project set in the Baltimore neighborhood of Sparrows Point.

“I don’t think there’s anybody writing for musical theater right now that’s vastly better than I am at writing songs,” Mr. Earle said, with such un-self-conscious forthrightness that he somehow didn’t sound vainglorious. “I’m trying to write the book, the lyrics and the music — I’ll make a lot of money if I pull it off,” he added, chuckling.

“I’m getting older, I tour all the time to make a living and I’ve got a 7-year-old son with autism, and I’ve got to figure out what’s going to happen to him after I’m gone,” he said. “Writing a musical is an arrogant thing to do, it’s a scary thing to do. I don’t know whether I’m going to pull it off or not, but I’m going to try.”

An earlier version of this article misstated the age of Vinie Burrows, a cast member of “Samara.” She is 92, not 88.