What they have in common is Mr. Hardy’s affection not just for the past but also for showmanship, nurtured by his early association with the theatrical set and lighting designer Jo Mielziner. 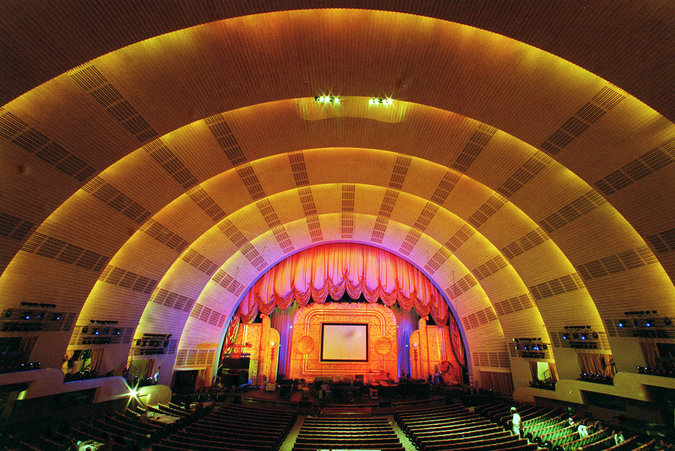 Though Mr. Hardy’s firms were best known for renovations and restorations, they have left some distinctive marks on the Manhattan and Brooklyn skylines.

The most jewel-like is the Claire Tow Theater on top of the Vivian Beaumont Theater at Lincoln Center, on which Mr. Hardy had worked in the early 1960s, mediating between Mr. Mielziner, the stage designer for the Beaumont, and Eero Saarinen, its architect.

The most commented on is 420 West 42nd Street, a 40-story apartment tower with a facade of alternating horizontal stripes in cream and dark purple brick. Neighbors call it the zebra building or the Oreo cookie building.

That was fine with Mr. Hardy. “The Chrysler Building is at the other end of the street,” he told The New York Times in 2001, “and the patterning and decoration here is meant to have its own pizazz and reflect the energy of 42nd Street.”

Mr. Hardy was the kind of architect who could use “pizazz” in a sentence without irony. “Good morning, sunshine” was one of his greetings, exclaimed as his caterpillar-bushy eyebrows seemed to leap with delight. “Happy day,” was another. But the exclamation that best summed up his six-decade career was “Onward!”

“I am tempted to say what it all comes down to is that for Hugh, all architecture was theater,” Paul Goldberger, a contributing editor at Vanity Fair, a professor of design at the New School and a former architecture critic for The Times, said in an email on Friday.

“I don’t think any architect has better embodied the spirit of New York than Hugh, not only through his work but also through everything he thought and wrote and did,” Mr. Goldberger said. “Every one of us has lived more intensely in New York because of Hugh, understood the city better because of him, and loved the city more because of him.”

Robert A. M. Stern, who chronicled much of Mr. Hardy’s work in his definitive architectural histories, “New York 1960” and “New York 2000,” said, “In a profession that frequently takes itself too seriously, Hugh sparkled with wit.”

Hugh Gelston Hardy was born on July 26, 1932, in Majorca, Spain, to Gelston Hardy and the former Barbara Bonestell Walton. His father, who worked for the Young & Rubicam advertising agency, had traveled to Spain to write a novel. The family soon returned to New York, dividing their time between Manhattan and Irvington-on-Hudson.

As his father had, Mr. Hardy attended Princeton. He earned a bachelor’s degree in 1954 and a master of fine arts degree in 1956. After serving as a drafting instructor in the Army Corps of Engineers, he began working with Mr. Mielziner. (He joined Local 829 of the United Scenic Artists in 1958.)

Mr. Hardy married the architect Tiziana Spadea in 1965. They were “the Nick and Nora Charles of a certain New York set, a group of people who are involved in helping to ensure a future for New York as rich in magic as its nostalgia-tinged past,” Julie Iovine wrote in The Times in 1997. Their children, Sebastian and Penelope, survive, as do three grandchildren.

Mr. Hardy’s exposure to Mr. Saarinen’s introspective design process convinced him that he could never successfully work for another architect, said John Fontillas, a partner in H3. So he opened his own shop in 1962.

Five years later, the partnership with Mr. Holzman and Mr. Pfeiffer was formalized. By 1977, with arresting projects like the new Orchestra Hall in Minneapolis, Hardy Holzman Pfeiffer could be called the “‘hot shop’ of architecture,” Mr. Goldberger wrote in The New York Times Magazine.

This is not to say that the firm escaped criticism. Preservationists, architects and elected officials took Mr. Hardy to task in 1984 for a proposal to build an apartment tower above the New-York Historical Society, at 77th Street and Central Park West. The Landmarks Preservation Commission rejected the plan.

But the firm was more likely to conserve than disrupt the past. As the New Amsterdam was being reconstructed in the mid-1990s, a plumber discovered a light fixture in the form of a woman’s head behind a gap in the wall.

Mr. Hardy was captivated. “It’s a face of such astonishing innocence and repose,” he said. “I don’t know that a contemporary face could be found with that sense.” She was incorporated into his plans.