The impact of 808 was loud and lasting. Roland claims it is heard on more hit records than any other drum machine, including tracks by Michael Jackson, Prince, Marvin Gaye — whose 1982 song “Sexual Healing” was largely constructed with an 808 — and Kanye West, whose album “808s and Heartbreak” was named after it.

Beyoncé, Madonna and Eminem, among many others, have mentioned the 808 in lyrics.

The 808 was widely embraced in hip-hop, particularly after the release of “Planet Rock” by Afrika Bambaataa & Soulsonic Force in 1982. In “808,” a 2015 documentary about the device by Alex Dunn, Public Enemy’s producer Hank Shocklee said, “It’s not hip-hop without that sound.”

Introduced in 1980 and discontinued in 1983, the TR-808 — TR stands for “transistor rhythm”— was an analog device that made frankly artificial drum and percussion sounds: tinny handclaps, hissing high-hats, a dinky cowbell. But it was portable and could be programmed by untrained musicians, and with circuits that included the specific defective transistor, the 808’s bass drum sound held thunderous low frequencies that could shake up clubs.

With the tone and decay controls on the 808, the bass drum sounds could also be sustained and broadened to suggest subterranean melodies.

The sounds of the 808 continue to be heard in R&B, pop and electronic dance music, and they are starkly in the foreground in the current production style called trap.

Those 808 sounds, however, are likely to be sampled rather than generated by an original machine. Only 12,000 TR-808 Rhythm Composer units were made, because as semiconductor manufacturing improved, the distinctively defective transistor became unavailable. 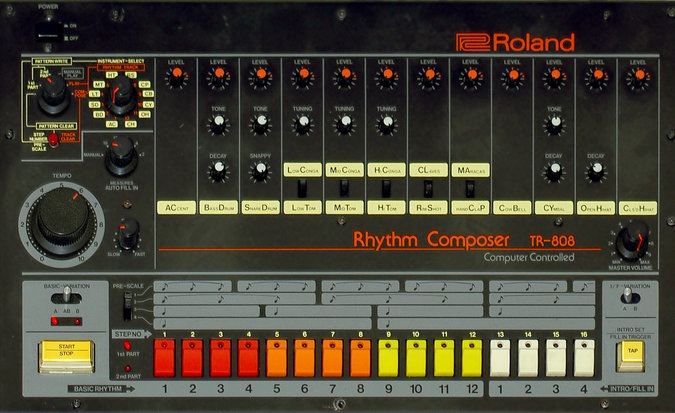 “No way to come back!,” Mr. Kakehashi explains in the documentary.

Roland moved on to the TR-909, which added MIDI control; it found its own devotees. And there were many other instruments to come.

MIDI works silently but its legacy is equally pervasive. MIDI is a shared communications standard that allows synthesizers, computers, keyboards and other devices from countless manufacturers to interact with one another. It sends information about sounds — pitch, duration, attack, decay — to the instrument (or computer) that will translate the information into the actual tone, giving countless electronic instruments a universal language and allowing musicians flexibility, control and the ability to mix and match all sorts of equipment.

In 2013, Mr. Kakehashi and Mr. Smith received a Technical Grammy Award for their work on MIDI three decades earlier.

Mr. Kakehashi was born in Japan in 1930. Drawn to engineering from a young age, he built his own shortwave radios while in high school during World War II. After the war, he started a clock- and watch-repair business that moved into radio repair.

He began experimenting with making musical instruments in the 1950s, and eventually his Kakehashi Radio Shop became Ace Electronics, which started making electric organs in 1960.

In 1964, Mr. Kakehashi developed the FR-1 Rhythm Ace, an early drum machine. An improved version, with preprogrammed patterns, was picked up by the Hammond organ company in 1967 as a module for its instruments, and Mr. Kakehashi and Ace entered a partnership with Hammond. But he was a minority shareholder in Ace, and left after a management change.

He started Roland in Osaka, Japan, in 1972; its first product was its TR-77 rhythm box. Roland introduced the first compact synthesizer in Japan, the SH-1000, in 1973, and went on to offer a vast assortment of keyboards, guitars, drums, amplifiers, speakers, effects and other devices under Mr. Kakehashi’s leadership.

Its rhythm boxes continued to evolve, and as electronic dance music spread, Roland’s TB-303 bass synthesizer, TR-808 and TR-909 all found enthusiastic users, as did its Jupiter and Juno synthesizers and Boss effects pedals.

Mr. Kakehashi marked his 30th year at Roland with an autobiography, “I Believe in Music,” in 2002; his second book, “An Age Without Samples: Originality and Creativity in the Digital World,” was published this year. There was no immediate word on survivors.

Mr. Kakehashi was still inventing new devices. His final project at ATV was the aFrame, described as an “electro-organic” percussion instrument and played like a hand drum.

“Music is as old as the shepherd with his panpipes,” he wrote in his autobiography, “but now it also is as new as the space age.”

An earlier version of this obituary misidentified a 1982 recording by Marvin Gaye that used the Roland TR-808 Rhythm Composer. It was the song “Sexual Healing,” not an album by that name.