Home Entertainment In ‘Atlanta,’ a Soundtrack That Subtly Whispers Its Locale 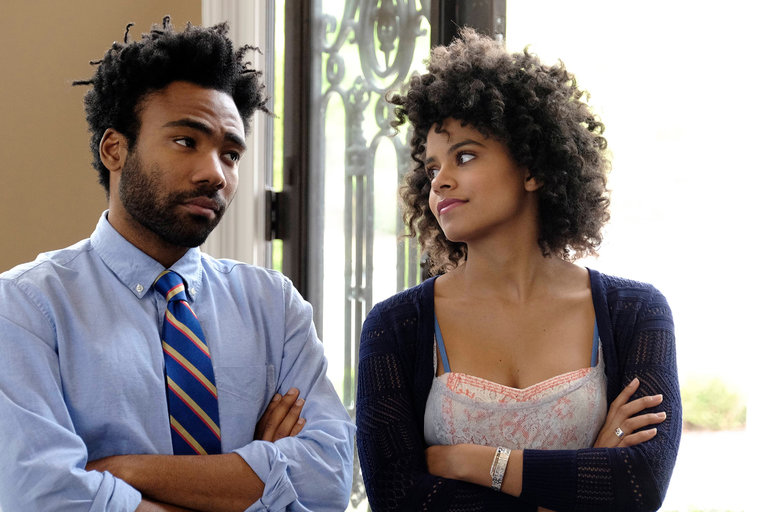 Donald Glover and Zazie Beetz on the FX series “Atlanta,” which has its season finale on Tuesday.

For a show ostensibly about a fledgling rap career, the experimental FX comedy “Atlanta” has a light, naturalistic touch with music. There are no predictably triumphant performance scenes or recording studio breakthroughs, no overwrought montages set to obvious pop songs.

Unlike the bombastic soundtracks to “Empire” or “Entourage,” which established their flashy entertainment-world settings by bombarding viewers with contemporary (or faux-contemporary) hits, “Atlanta” is meticulous and understated in its deployment of carefully selected songs to build mood and signal authenticity.

As the show loosely tracks the bizarrely mundane lives of the rookie music manager Earn (Donald Glover) and his rapper cousin, Paper Boi (Brian Tyree Henry), music is most likely to be heard bleeding from a character’s headphones or car stereo. Sometimes, it’s borderline subliminal.

“Whether or not anybody can hear it doesn’t matter,” said Jen Malone, the show’s music supervisor. “It’s 100 percent real.”

In “B.A.N.,” the seventh episode of the show’s first season, which has its finale on Tuesday, the only hip-hop heard at all is a few seconds of “Red Opps,” by the bubbling Atlanta rapper 21 Savage, throbbing faintly from a passing car. The following episode, “The Club,” features wall-to-wall background music but sacrifices no attention to detail. In addition to unobvious tracks by Future and Young Thug, two leading lights in Atlanta’s dominant scene, the pitch-perfect nightclub playlist also includes Crime Mob’s “Knuck if You Buck,” a 12-year-old Southern rap staple, and Young Dro’s “We in da City,” a minor single by a mainstream also-ran who still commands legend status in certain pockets of Georgia.

Even with its relative obscurity and unobtrusive placement, the soundtrack of “Atlanta” is crucial to its next-level specificity, regional intimacy and obsession with atmosphere. The expert, bespoke musical curation — there is no recurring theme song, and no composer whose score can serve as a shortcut to emotion — was a major focus for the show’s architects, most of whom share a background that has nothing to do with television. Whereas most shows would leave the song choices to the dedicated music department, on “Atlanta,” everyone was qualified.

Led by Mr. Glover, the show’s star and creator who also raps as Childish Gambino, the creative team responsible for the hyper-accurate local vibe includes multiple other musicians and managers from Mr. Glover’s inner circle, including his brother, Stephen, a writer and rapper. Also part of the mix is the director Hiro Murai, who was at the helm for most of the first season after working primarily on music videos.

“That’s what brought us all together in the first place — music,” said Jamal Olori, an “Atlanta” staff writer and sometime rapper known as Swank. “We all understood that power and knew we could put certain feelings and energies inside these episodes.”

Highlighting the right emerging artists was one priority. “We all listen to stuff early and we take pride in it,” said Fam Udeorji, one of Mr. Glover’s managers and the music consultant on “Atlanta,” citing Cousin Stizz and Rich the Kid, rising rappers whose songs were featured on the show.

But while choosing the music was often collaborative, tracking down the performers and songwriters for permission — or clearance, in music supervisor parlance — fell to Ms. Malone, a former rock publicist who had been largely unfamiliar with the underground world of internet rap. In some cases, “We were taking an artist, literally, to the next level,” she said, meaning that the performers were often unfamiliar with the intricate paperwork required to be paid. Mr. Udeorji added that for smaller artists, many of whom exist mainly on platforms like SoundCloud, “a lot of their managers are just their homie,” which can require on-the-job training.

Xavier Wulf, an unsigned rapper whose song “Philosopher’s Throne” opens the fourth episode, relied on Ms. Malone to walk him through the contracts, though his connection to “Atlanta” helped to score him a deal that will handle such tasks in the future. (“one of the coolest moments of my life … thank you @atlantafx,” the rapper wrote on Instagram after the episode aired.)

But even making first contact could prove time-consuming. Ms. Malone said she relied on all manner of social media — and even the obituary of one songwriter’s mother — to locate the many parties required to sign off on a song’s use. “I found one guy who owned 3 percent of “Oui,’’ the Jeremih song, on LinkedIn,” she said.

In another instance, securing a track by the Alabama rapper Doe B, who was killed in 2013, required coordinating the cooperation of a former manager, whom Ms. Malone contacted on Instagram, and the rapper’s estate, run by a court-appointed lawyer, because each owned part of the composition.

Once again, the song (“Let Me Find Out”) plays only briefly from a car in the background, but its inclusion in the first episode helped to establish Paper Boi as a fully realized character. “That’s somebody who would never be synced on another show,” Mr. Udeorji said proudly of Doe B, using the industry term for a song placement.

Still, it wasn’t all esoteric regional hip-hop. Throughout its first season, “Atlanta” has strayed confidently from its main story, shifting tone and character focus with ease from episode to episode. The music has followed suit, from Yo Gotti and Kodak Black to Bill Withers and Funkadelic. In one scene, Earn listens to the dreamy indie band Beach House on headphones.

“It is about a rapper, but it’s not wall-to-wall trap music,” Ms. Malone said. “He absolutely would be listening to that.”

While nodding to local Atlanta rap fixtures like OJ Da Juiceman and Migos was a must, so was undermining expectations and heightening incongruity.

In what may be the show’s most inspired musical moment thus far, Paper Boi and his stoner-mystic sidekick Darius sing along in falsetto to the 1983 R&B hit “Encore,” by Cheryl Lynn — a song “their mom probably played for them,” Mr. Udeorji said — in a parking lot ahead of a drug deal.

“The fact that two dudes who look like that are in the car having that moment …” Mr. Udeorji chuckled. “That happens all the time.”