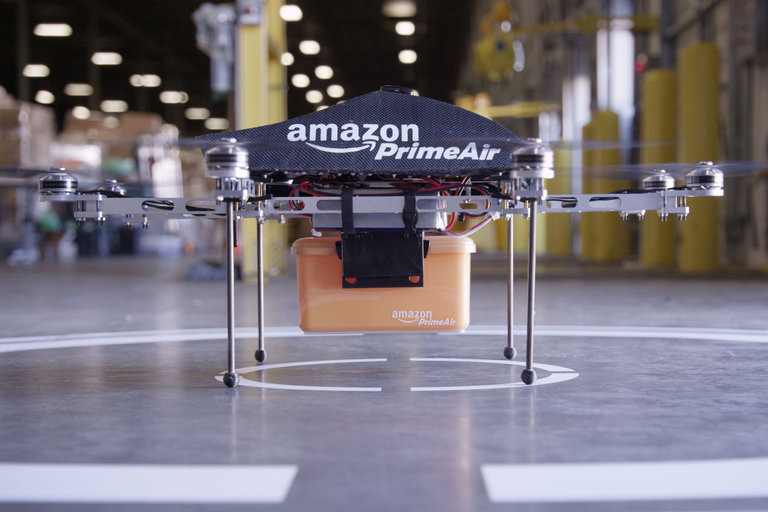 An Amazon delivery drone. The company plans to expand tests of drone deliveries in England.

When Jeff Bezos, Amazon’s chief executive, first said that the e-commerce giant wanted to use drones to deliver packages directly to customers’ homes, many people thought he was crazy.

Three years later, his claims no longer look so outlandish.

On Wednesday, Mr. Bezos announced on Twitter that his company had made its first commercial drone delivery, on Dec. 7, to an Amazon shopper in Cambridgeshire, England, a major step forward in its experiments with automated shipments.

The flight — to deliver an Amazon Fire streaming device and popcorn to a customer identified only as Richard B. — took off from a nearby Amazon warehouse and lasted 13 minutes, covering about two miles.

Amazon said it would now test drone deliveries with two more customers near Cambridge, an English city where the company has a large drone-testing plant. If the tests are successful, the company says it wants to expand the number of consumers who could participate in the trial to dozens in the coming months, eventually allowing hundreds to use the drone service.

The start of customer trials for the drone delivery service, which Amazon calls Prime Air, is a milestone for a technology that could eventually automate an important part of Amazon’s business as the company looks to cement its position as the world’s dominant online retailer.

There are reasons to be skeptical about how broadly drones can be used, however, because of aviation rules, weather restrictions and weight limitations on cargo.

Experts say that the advent of widespread drone deliveries, even if technically possible, would take years, and regulators from the United States and elsewhere could block the plans.

Even if drones end up handling only a small portion of Amazon’s overall deliveries, the implications could be far-reaching.

The company, for instance, might not need as many truck drivers or other costly logistical operations. Drones could also have environmental benefits, by reducing reliance on pollution-belching vehicles. The biggest boon may be to customers, who could be able to receive their orders more quickly, depending where they live.

The fact that Amazon’s latest drone tests were in Britain is no coincidence.

The country’s regulators have been more cooperative than their American counterparts about such flights, even signing an agreement with Amazon in July to allow the testing of drones in rural and suburban areas.

As part of those trials — some of which have taken place at a secretive farm in rural Cambridgeshire — Amazon has been allowed to fly drones without a human pilot at the controls, navigating to destinations solely by GPS. The company says it has developed “sense-and-avoid” technology to help the machines fly around towers, birds and other obstructions.

Not all of the residents in the area have been fans, however.

Julia Napier, who helped found a Cambridgeshire association that maintains public footpaths around one of Amazon’s test sites, said the company’s drones threatened wildlife and the wider countryside, something that the company has denied.

“They are testing those drones here because they can’t do it in America,” she said. “Whatever the Americans don’t want, I don’t want it, either.”

While Amazon has experimented with different drone designs, the one that makes the delivery in the company’s video appears to be a quadcopter — a helicopter with four rotors — that can take off and land vertically.

So far, the devices are limited to carrying cargo weighing less than five pounds. They use cameras to identify landing marker pads that customers place in their backyards or in other unobstructed locations.

In the United States, regulators have been more cautious about drone tests, though the Federal Aviation Administration issued new rules this year to allow for the commercial use of drones under certain circumstances. One major limitation was the stipulation that devices must be operated remotely by a human pilot.

Amazon is not the first company to test drone delivery.

The Chinese internet retailer JD.com has a fleet of drones flying autonomously on round trips of a maximum of 15 miles to reach rural communities (though a person still takes the package on the last leg of its journey to the recipient). In New Zealand, Domino’s Pizza is testing drones to deliver fast food across the country.

And in the United States, 7-Eleven said in July that it had delivered Slurpees, doughnuts and other food to a customer in Reno, Nev. Google has tested drone delivery of Chipotle burritos on the Virginia Tech campus.

Amazon, however, with its deep pockets, logistical expertise and technological prowess, still seems the most likely to push widespread drone delivery into the mainstream, at least in the Western world.