Home Business In Paris, the Two Women Who Are Colette

“It’s a perfect marriage of minds,” said Michel Gaubert, the sound designer who has created 18 Colette CD compilations over the years. “For both women, curiosity is an essential character trait, plus they love sharing what they discover. With them, nothing is calculated, it’s all instinct.”

Starting from scratch in 1997 with a bright idea, four bare walls and no fashion contacts to speak of, Ms. Roussaux and Ms. Andelman demolished the boundaries separating style, music, art and design. Today Colette has 110 employees and just one permanent address, 213 rue St.-Honoré in the First Arrondissement. Colette generated sales of 28 million euros ($29.4 million) in 2016; e-commerce provided about 25 percent of that total.

Yet Colette’s namesake has remained mostly anonymous up to now. Which is fine with her: She’s camera-shy, and this was only the third interview that the real Colette had granted in the last two decades and her first for a non-French publication. She’s more than happy to run the shop and oversee everything — including accounting and the floor and window displays — while her daughter, the store’s sole buyer and its public persona, scouts the world for the exclusive, beautiful and rare. 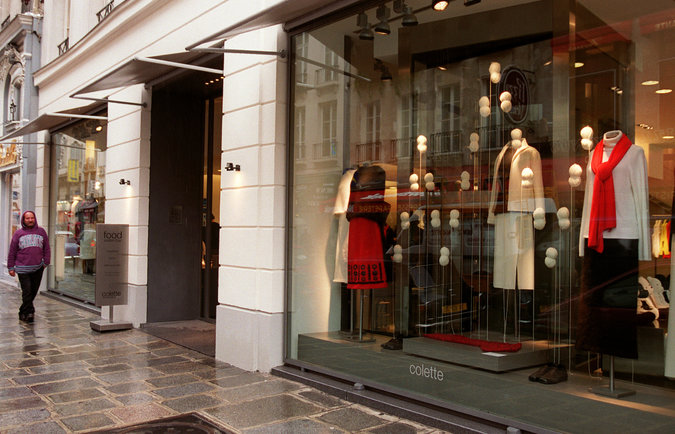 “I’m lucky because Sarah’s my shield,” Ms. Roussaux said. “She’s the point of contact, and I stick to the store. It’s perfect.”

“Naïvely, we thought that no one would ever realize there was a Colette,” Ms. Andelman said. “We chose the name because it’s offbeat and old-fashioned compared to what we wanted to do, which was modern. But we never thought it was about us. Colette is an empty shell. What’s important is the designers who come into the store. Unfortunately, today it’s impossible to stay hidden.”

Seeing mother and daughter side by side at the store’s downstairs Water Bar, the family resemblance is obvious: Both project a strong natural reserve, candid manner and ready smile. And there’s the short-cropped hair, the salient cheekbones, the high arched brows and the enviable complexions, even sans makeup.

By chance or design, the women’s outfits on this particular day riff on the French tricolor. Both had full, navy blue Thom Browne skirts and Converse sneakers, which the taller, more angular Ms. Andelman, 41, wore with a white Mira Mikati x Jack Pierson blouse and a J.W. Anderson baseball jacket. Ms. Roussaux (who would not reveal her age) wore hers with a white T-shirt and red bandanna.

By all accounts, the two never argue. “I keep her informed, and she always has good advice if I’m hesitating over something,” said Ms. Andelman, who is married to the American music video director and photographer Philip Andelman (they have a young son). “Otherwise, she leaves me completely free to make some unusual choices.”

Colette has never had a marketing plan. In 1997 Ms. Roussaux, a respected merchant and divorced single mother, sold her fashion store in the Sentier neighborhood to start a venture with her daughter, an art school graduate and her only child. At the time, the young woman was gravitating more toward magazines, books and art than fashion.

“The decisive element was that the Sentier wasn’t Sarah’s world, and the business was changing,” Ms. Roussaux recalled. “I couldn’t do things the way I wanted to anymore, but we were lucky enough to be able to travel and buy things from all over. Then we moved, and there was this space. Every time we walked by, we’d talk about what we’d put in there. It was all very spontaneous.”

They bought a long-vacant store on the ground floor of their apartment building, in what was then a sort of no-man’s-land neighborhood between the Rue Royale and Les Halles.

“With age, I’ve come to accept that maman opened Colette for me,” Ms. Andelman said. “At the time she may have wanted to work a little less, but she wound up working even more, nonstop.”

During the week an early morning passer-by will likely spot Ms. Roussaux overseeing housekeeping and orchestrating the staff until the doors open at 11 a.m. On Sundays, like clockwork, she and the stylist Éric Chevalier take down the mannequins to give the space a complete style reboot, incorporating Ms. Andelman’s latest selections, and refreshing the window display.

Beyond big brand collaborations such as the 2011 Chanel x Colette pop-up in a defunct gas station down the street (now the Balenciaga store), and developing limited edition scarves with Hermès and countless others, Colette has reached across cultural boundaries to support stars including Pharrell Williams, Jay-Z, Drake and Kanye West in their fashion/music ventures.

For the Euro 2016 soccer championship, Coca-Cola issued an exclusive “Colette” bottle in-store, recruited graphic artists to redo the facade and interiors and hired the Parisian art dealer Kamel Mennour to curate an exhibition on Éric Cantona, a former member of the French national team. When Apple introduced its watch last April, Colette, the only non-brand stockist in the city, sold 1,292 in six days.

“We never take things just because we think it’s going to sell,” Ms. Andelman said. “There has to be a certain logic. It has to be different, something unto itself, that’s of high quality and that we’ve never seen before. It has to have integrity and be new. With everything that already exists out there, it’s really hard to do something new.”

Paris Fashion Week being what it is, there has been gossip that Colette may close next year, rumors that Ms. Andelman emphatically denies.

After the fall season wraps March 7, Colette will introduce the Weeknd’s “Starboy” fashion collection, named for the musician’s recent album. Also, there has been talk of a project with the French electronic music duo Daft Punk in June for men’s fashion week in Paris.

The official anniversary celebration is scheduled for March 21 to 25 in Paris, with the store releasing a 20th anniversary CD compiled by the music producer and DJ Pedro Winter, featuring one track for every year, issued in a 1,000-copy limited edition.

Ms. Roussaux and Ms. Andelman also are bringing Daniel Arsham and Alex Mustonen of the Brooklyn-based studio Snarkitecture to the Musée des Arts Décoratifs, where they will recreate “The Beach,” their interactive installation featuring hundreds of thousands of balls in recycled plastic. It will be free and open to the public.

“I think what makes the difference is that we don’t need to ask anyone else about what we want to do,” Ms. Roussaux said. “If we want to paint the place green or blue, we talk about it for two minutes, and we do it. I think that’s the secret: work and spontaneity.”

An earlier version of this article misstated some of the Paris-based store Colette’s post-fashion week plans. It will introduce a new fashion line by the musician the Weeknd and may be working on a project with the French musical group Daft Punk. But it will not open a pop-up store in Los Angeles in connection with its 20th anniversary.