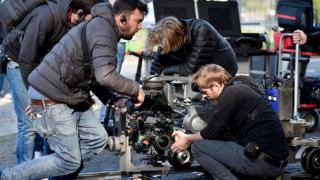 The creative sector is said to support 2.9m jobs in the UK

Creative companies are becoming increasingly important to the UK’s future economic success and should be at the heart of the government’s new industrial strategy, a trade body says.

The Creative Industries Federation says film-making, music, advertising and video games are all big export earners but are often overlooked by ministers.

It says enterprise zones, tax breaks and access to finance could help firms.

The business secretary says he was committed to a “deal” with the sector.

The role of the UK’s creative industries, which also includes theatre, architecture, broadcasting, fashion, museums, and galleries was recognised when the government unveiled its industrial strategy Green Paper in January for boosting the post-Brexit economy.

The federation has unveiled a blueprint of policy recommendations for the creative industries which it says is “the fastest growing sector of the UK economy”.

Brexit means it is now “even more crucial” for the sector “to deliver more jobs, trade and exports”, it adds.

The federation’s chief executive, John Kampfner, said: “There has been a tendency to dismiss the creative industries as something lightweight while claiming the glory of billions of pounds in trade that comes from hits such as War Horse, Sherlock and Slumdog Millionaire.”

He said the government should recognise that creative industries “will be as important to future economic success as traditional industries, such as cars or oil and gas”.

Among its other recommendations are campaigns to increase diversity in employment in the sector and advice for start-ups on exporting.

He said TV producer Sir Peter Bazalgette is carrying out an independent review of how the sector “can help drive prosperity across the country by developing new technologies, capitalising on intellectual property rights and encouraging creativity from people of all ages and backgrounds”.

He added: “Through our industrial strategy I want to ensure we build on this sector’s strengths, which is why we have committed to an early sector deal for the industry in our green paper.”