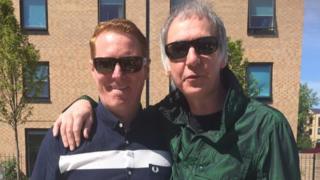 Gill (left) was the “beating heart of the Inspirals in more ways than one”, keyboardist Clint Boon said

Craig Gill, the drummer of Madchester band Inspiral Carpets, has died at the age of 44.

Gill was one of the founding members of the band in Oldham in the early 1980s, alongside guitarist Graham Lambert, who tweeted he would “never be forgotten”.

A statement on the band’s Facebook page said they were “absolutely devastated” by the loss of “our brother”.

The group’s hits include Saturn 5, This Is How It Feels, She Comes In The Fall, Dragging Me Down and I Want You.

Gill, who formerly DJed at the well-known Manchester club The Hacienda, was also a music historian and ran music-themed tours around Greater Manchester.

BBC News entertainment correspondent, Colin Paterson said the news had come “absolutely out of the blue”.

The Inspirals’ statement said the band had been “honoured to work alongside him for the last 30 years”.

“To say we’ll miss him is an understatement,” it read.

“He was the beating heart of the Inspirals in more ways than one.”

Former Oasis frontman Liam Gallagher, whose brother Noel was a roadie for Inspiral Carpets, tweeted that he was “stunned”, while Tim Burgess, singer in The Charlatans, wrote he was “loved” seeing the band and the news had left him “so sad”.