Home Lifestyle Art Insult Tonya Pinkins? She Got There First.

The video participates in the “Roast Yourself Challenge,” a gauntlet thrown last June by the YouTube star Ryan Higa. In his initial video, Mr. Higa insults himself to a catchy beat, then invites others to do the same. “The only rule of the challenge is to make fun of yourself,” he said. 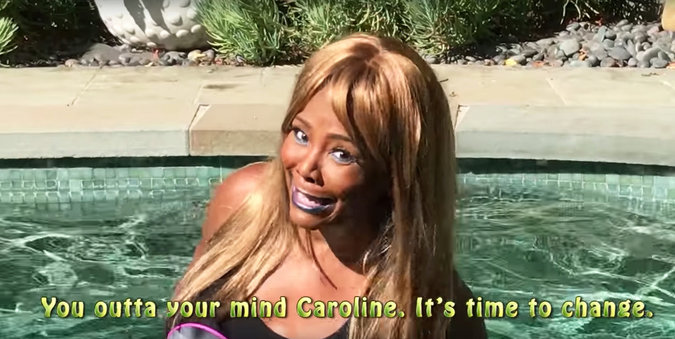 Ms. Pinkins first heard about the challenge on a panel at the Toronto International Film Festival last September. She saw a couple of videos online and knew she wanted to create one. “I want to make people laugh a lot,” she said. “We need to laugh and we need to laugh at ourselves as much as possible.”

She was speaking via Skype from a Starbucks in Singapore, in the midst of a long trip that would also take her to Vietnam, Thailand and India in search of teaching opportunities. When Skype gave out, she continued via phone, text and attempted WhatsApp, remaining good-humored throughout.

After all, she has been through worse. When she decided to leave “Mother Courage,” she wrote an open letter, published by Playbill, criticizing a “cultural misappropriation” of the African setting and a vision of the lead character who “would not be an icon of feminine tenacity and strength, nor of a black female’s fearless capabilities,” but rather a “delusional woman.”

In writing the letter, she was, she felt, “the most authentic I may have been as a human being.” She liked that feeling. Yet her friend the playwright and activist Eve Ensler warned her that she might face consequences — attacks on her character or a chilling effect on her career. “I was saying: ‘Be aware of what you’re going into. Do it with your eyes open,’” Ms. Ensler recalled recently by telephone. A host of negative comments did ensue, including at least one website dedicated to her disparagement.

It was a difficult time, Ms. Pinkins said, but she got through it. “Most people think if that happened they would die. They would disappear, they would crawl under the rug,” she said.

But she didn’t die and she didn’t disappear. Last year you could see her in popular television series like “Madam Secretary” and “Gotham.” She also appeared in the Hulu mini-series “11.22.63.” Its showrunner, Bridget Carpenter, described her work as “intelligent, insightful, clear, with wonderful emotional depth.”

She received offers for several plum Off Broadway roles, in shows like “Marie and Rosetta” at the Atlantic Theater Company and “War” at Lincoln Center Theater, she said, which her filming schedule precluded.

Still, she never forgot the comments she received in the wake of “Mother Courage,” and as soon as she heard about the Roast Challenge, she knew that she could defuse them by turning them into unrestrained comedy. Through a mutual friend she contracted the writer Isaac Klein to compose the rap and sent him link after sneering link to the criticism she had gotten. “I want it all in there,” she told him.

Mr. Klein had a lot to work with. A performer of indisputable virtuosity and bite, Ms. Pinkins has seen perhaps more tumult offstage than on. She landed in the tabloids after a contentious custody battle and subsequent fights over child support, and has been open about her time on public assistance. If professional ructions have been fewer, she has developed a reputation as a fierce and fiercely opinionated artist. In addition to the “Mother Courage” ado, she has fought publicly over salaries, resisting the idea that “women are supposed to take less because a man likes you or says something nice to you. I’ve got four kids to feed, and I’ve got to keep a roof over their heads. You liking me can’t pay my bills.”

Mr. Klein stuffed all of this into his first draft. Then he worried. Could he really show a woman famous for roles in “Jelly’s Last Jam” and “Caroline, or Change” lyrics like “You’re the only Tony winner best known for being on welfare”? And what about his riff on the Classic Stage controversy: “You quit ‘Mother Courage.’ Were you smokin’ crack?/You finally booked a good show and left cuz Brecht wasn’t black?”

He also wasn’t sure if she’d accept the suggestion, made by his writing partner, James Stewart, that they set the rap to “Lot’s Wife,” Ms. Pinkins’s lacerating aria from “Caroline, or Change,” the 2004 Broadway musical written by Tony Kushner and Jeanine Tesori.

“I was a little terrified,” Mr. Klein said, speaking by telephone. When he presented it to Ms. Pinkins, she said, “It’s wicked and awesome and I love it,” he recalled. The notes she gave were formal ones, like prompting him to write a faster Daveed Diggs-style rap for her.

The director George C. Wolfe, who has worked with her several times, described the video as “typical Tonya. There’s a ferocity and an intelligence and a wit. It’s where bravery and madness meet.” He called Ms. Pinkins “passionate and committed,” noting that “her heart and her aggression are bound together in a really fascinating way.”

The playwright Branden Jacobs-Jenkins loves the video, too. (She co-starred in his “War” at Yale Repertory Theater.) “Tonya’s gift and curse is that she’s got a political heart and mind and such an intense breadth of experience in the theater coping with the slings and arrows of stereotype and tricky representation,” he wrote in an email. He sees the video as a response.

Ms. Pinkins has been pleased by the reaction. Most of her friends have loved it, she said, and if a few were shocked, they got over it. That’s how she knows it’s working. “If everybody likes it, something’s off,” she said. She has called on other Broadway artists, like Cynthia Erivo, Kristin Chenoweth and Lin-Manuel Miranda, to roast themselves, too. If it catches on, she said, “it could be a very cool thing.”

But even if no one takes up her challenge, the video has reinforced her sense of the pleasure and peace that comes with speaking out. For her, it is better to be heard than loved, and she’s searching for more opportunities for writing and directing.

Earlier in her career, she said, she couldn’t get away from the idea that as a woman, she had to be “likable and pleasing.” She has gotten away from that now. With her four children now grown, “I’m a crone,” she said. “I say that proudly. That’s the third stage of a woman’s life, and that’s when we can become wise women.”

Wise women who do rap battles.