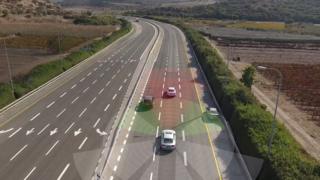 US chipmaker Intel is taking a big bet on driverless cars with a $15.3bn (£12.5bn) takeover of specialist Mobileye.

Intel will pay $63.54 a share in cash for the Israeli company, which develops “autonomous driving” systems.

Mobileye and Intel are already working together, along with German carmaker BMW, to put 40 test vehicles on the road in the second half of this year.

Intel expects the driverless market to be worth as much as $70bn by 2030.

Jerusalem-based Mobileye has contracts with 27 car makers. It also controls about two thirds of the market for software that runs automatic emergency braking and semi-autonomous cruise control systems already fitted to cars and trucks.

Earlier this month, Nissan test drove a converted Leaf vehicle and said it hoped to make the cars available by 2020.

Announcing the deal, Intel said that as cars “progress from assisted driving to fully autonomous, they are increasingly becoming data centres on wheels”.

The chipmaker reckons that by 2020 driverless cars will generate 4,000 GB, or 4 terabytes, of data a day that can be mined for information.

Betsy Van Hees, analyst at Loop Capital Markets, said Intel had very little presence in the automotive market, “so this is a tremendous opportunity for them to get into a market that has significant growth opportunities”.

Timothy Carone, a Notre Dame University academic, said: “Major players are finding ways finding ways to position themselves for a change as seminal as the personal computer revolution.”

Mobileye was founded in 1999 to develop “vision-based systems to improve on-road safety and reduce collisions”.

The company, along with Intel’s automated driving group, will be based in Israel and led by Amnon Shashua, Mobileye’s co-founder, chairman and chief technology officer.