An edict issued this month by the head of the Sports for All Federation, a government institution promoting sports and a healthy lifestyle, effectively banned Zumba classes for being contrary to Islamic precepts.

Ever since, Ms. Nafisi’s phone has been buzzing with messages from depressed Zumba aficionados who feared their fitness parties, as some describe the classes, were canceled.

“It is as if they have legalized alcohol — everyone is talking about it,” Ms. Nafisi said, referring to the liquor ban in the country. Even her mother-in-law called from California to ask if this was the end of Zumba in Iran.

“Of course not,” Ms. Nafisi fumed. “Zumba will not be stopped.”

Coming together for fitness dancing is just one of many examples of the tensions between Iran’s changing middle-class society and those ruling the country.

Since the 1979 Islamic revolution, Iran’s Shiite Muslim clerics have codified into law hundreds of lifestyle regulations, meant to keep their flock on the right path. In their world, things like drinking alcohol, mixing between men and women, and dancing can lead to committing sins. Sins can undermine families, the cornerstone of life in Iran, so it has been decided that these temptations, and many others, are illegal, as an extra push to make sure they do not happen.

But they do happen, because enforcement can go only so far in a society completely changed over the last 40 years. While prosecutions can result in fines or even caning, they are not common, and on Tuesday, thousands of men and women danced in the streets to celebrate the Iranian national soccer team’s earning of a spot in the World Cup.

Today, many Iranians shrug off most of these sins, saying it should be up to individuals to decide if they commit any.

In practice, this means that popular but proscribed activities, including Zumba dancing, are often tolerated if they take place semi-hidden or under a different name.

“I taught Zumba for years here,” Ms. Nafisi said. “But instead of calling it Zumba, I called it ‘exercise to music’ so no one would notice.”

Other names used for the classes have included “body rhythm,” “advanced aerobics” and “Mumba.”

Then, in a sequence of events not uncommon in Iran, another Zumba instructor started calling her classes by their real name four years ago. When the authorities did not react, many other instructors, including Ms. Nafisi, swiftly followed.

Until this month. In a letter, the head of the Sports for All Federation, Ali Majd Ara, decided that Zumba wasn’t one of the accepted sports. The problem: Making “rhythmic movements” or “dancing” is illegal, his letter said.

“Considering that activities such as Zumba, performance of rhythmic movements and dancing in any form and under any title lacks legal credibility, I request that you issue an order to ban such movements,” Mr. Ara wrote in a letter to a provincial official, which was published by the semiofficial Islamic Students News Agency. Given Mr. Ara’s position, the letter was seen as amounting to a nationwide ban.

“Suddenly someone comes and says this or that is not allowed,” said Sepideh Heydari, 33, a nail specialist who has been taking Zumba classes for the last two years.

“I like it because it’s fun. I become happy, and my spirit is uplifted when I dance,” Ms. Heydari said. “That is probably exactly why they disapprove of it.”

It took several phone calls to wake up Hossein Ghayyoumi, a clergyman and supporter of the moderate president, Hassan Rouhani, from his midday sleep during the fasting month of Ramadan. Zumba was not something he had been familiar with, he admitted, but when he heard of the ban, Mr. Ghayyoumi sat down behind his computer and watched some videos showing it.

“In all honesty, I couldn’t help myself from moving in my chair,” said the cleric, 66, who suffers from chronic arthritis. “This seems like good exercise from someone like me. As a human being I immediately connected to the rhythmic movement. But as a cleric I am taught that dancing and music is pleasure-seeking and therefore haram, or unlawful.”

Even jobs related to dancing and music are unlawful, he said, like cutting wood to make an instrument.

Mr. Ghayyoumi said that some lower-ranking clerics had tried to change this mind-set, by trying to find some justification for at least listening to music, but that they had hit a brick wall with the older clergy.

“They were unable to change the mainstream clerical ideas on this matter,” he said.

For Ms. Nafisi, Iran’s clerics were not the only ones opposing her. So, too, was the legal department of Zumba Fitness, the American company behind the fitness craze, which, she said had revoked her instructor permit last year when she had written on a Facebook page related to the company that she worked in Iran. 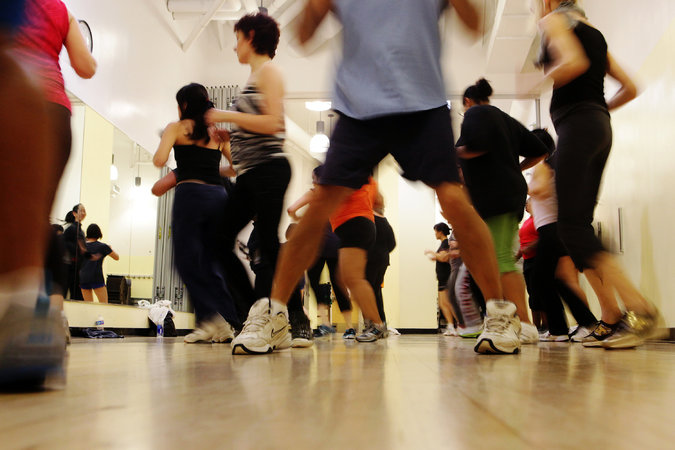 A Zumba class in New York. Zumba Fitness, the American company, revoked the instructor permit of Sunny Nafisi in Tehran because of sanctions on Iran.

Some American companies interpret sanctions on Iran rigidly, and Ms. Nafisi received a letter saying that only if she moved to a different country would she get her instructor’s permit back. The company did reimburse some of the fees she had paid for training in Dubai.

“Zumba is illegal in Iran because of sanctions,” Ms. Nafisi said she had been told. “I told them what about Iran playing soccer with the U.S. team? But they never answered me.”

She will go ahead with her scheduled Zumba classes in Tehran anyway, Ms. Nafisi insisted, no matter what clerics or lawyers would say.