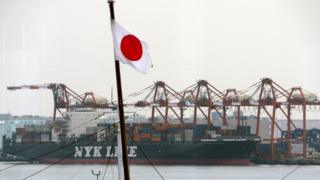 The “smart ships” will use artificial intelligence to plot the safest, shortest, most fuel-efficient routes, and could be in service by 2025.

The AI will also be used to predict malfunctions and other problems, which could help reduce the number of maritime incidents.

The companies plan to build about 250 self-navigating ships.

Developing the technology is expected to cost tens of billions of yen (hundreds of millions of dollars).

Shipping firms Mitsui OSK Lines and Nippon Yusen are working with shipbuilders including Japan Marine United to share both costs and expertise, according to the Nikkei Asian Review.

Nippon Yusen has already been working on technology to enable ships to use data to assess collision risks. It is also working with Norwegian maritime company DNV GL to collect and analyse data on vessel condition and performance.

Japan Marine has been developing a similar data analysis system with the aim of diagnosing breakdowns before they happen.

The first ships will retain a small crew to oversee certain operations, but there are plans to develop completely autonomous vessels in the future.

In 2016, Rolls-Royce announced plans to develop unmanned cargo ships, starting with remote-controlled vessels that could be operational as soon as 2020.

“This is happening. It’s not if, it’s when,” Rolls-Royce vice president of marine innovation Oskar Levander said at the time.

“We will see a remote-controlled ship in commercial use by the end of the decade.”

Navigation and basic operations will be automated, while a human “captain” based on shore will continue to look after “critical decision-making”.