The top Democrat on the committee, Senator Martin Heinrich of New Mexico, ignored the new jobless rate and focused instead on the disappointing payroll gain. “Today’s jobs numbers show there are still challenges ahead that this administration must address,” he said. “President Trump promised that he would be ‘the greatest jobs producer that God ever created.’ Democrats on the Joint Economic Committee will hold him to this promise.” 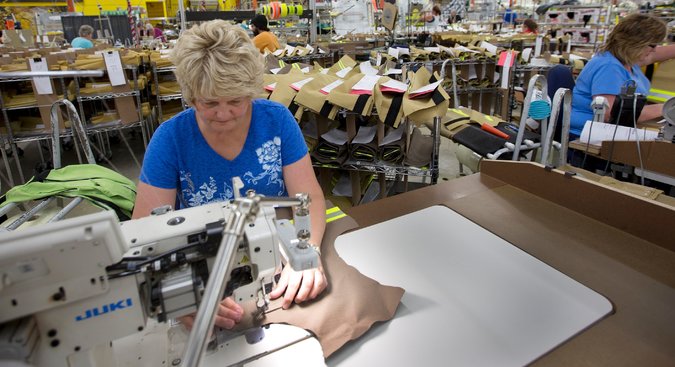 A worker stitching firefighter suits in July in Pittsfield, N.H. Manufacturing jobs are being closely watched as a barometer for overall economic growth.

The robust numbers in January and February led some analysts to conclude that the economy was benefiting from a “Trump bump” after Mr. Trump’s election, but hard data to support that argument has been scarce.

A month ago, Sean Spicer, the White House press secretary, claimed credit for the increased job creation on Mr. Trump’s behalf, saying it was a result of “the surge in economic confidence and optimism that has been inspired since his election.”

The latest report will only add to the debate over whether so-called soft data, like stronger sentiment among businesses, is actually prompting companies to hire more workers. March’s data suggests it is not, as does the 38,000 downward revision in estimated job creation in February and March.

“It was a disappointing report with no silver lining in the details,” said Rob Martin, an economist at Barclays. “Service-sector employment weakness points to a substantial slowdown in activity.”

The headline number for hiring and the unemployment rate are derived from separate surveys by the Bureau of Labor Statistics, one of establishments, the other of households. Although the two tend to converge over time, they can vary widely from month to month, and March was one of those times.

So while businesses showed an anemic gain of 98,000 jobs in terms of payrolls, households reported a 472,000 increase in employment, without any fall in labor participation. That explains why the unemployment rate could fall by 0.2 percentage point, even as the headline number for job creation fell way short of expectations.

But some economists are wary of putting too much weight on March’s household figures since the week they were gathered by government researchers coincided with a blizzard on the East Coast. That may have skewed the data by basing calculations on fewer households.

In recent months, blue-collar fields like manufacturing and construction have been very solid, a sharp contrast with late last year when service industries like education, business services and health led the way.

After weakness last fall, factories have been gaining steam, with manufacturers adding another 11,000 jobs in March.

Manufacturing accounts for only 9 percent of employment but punches above its weight, because factory jobs pay considerably more than many service positions. Gains in this sector also help Mr. Trump with his base, which liked his promises to erect trade barriers and promote blue-collar jobs.

But for the moment, improving economies overseas, and the fading effects of the strong dollar, have much more to do with the manufacturing sector’s revival than policies in Washington.

As some experts feared, the deep retrenchment in the retail sector as consumers shift from brick-and-mortar shopping to online purchases clearly registered in March’s report. Retail lost 29,700 jobs, on top of a 30,000 reduction in February.

With chains like Sears, J.C. Penney and Macy’s set to close hundreds of stores and lay off thousands of workers, retail is expected to create a big drag on overall hiring in the months ahead.

The findings on wages were more encouraging. Although the proportion of Americans in the work force remains near multidecade lows, the fall in the unemployment rate and the steady hiring in recent months are translating into raises for most workers.

“In business reviews, the No. 1 question is whether employers are competitive as workers become more scarce,” Ms. Glaser said. She added that her firm was also seeing more companies hire new employees directly, rather than first having them work in a temporary position, or what she terms “try before you buy.”

“Employers are also converting temp workers to permanent earlier than usual,” Ms. Glaser said. “We’re seeing an uptick across the board.”