Where did you get the idea for this project?

The offer came up to tour China. We thought, “Fat-chance hotel on that one.” Because they insisted on a copy of every lyric I’d ever written, to analyze it. And then, shock horror, they actually approved us. So, I immediately thought, Where have I gone wrong?

You published a memoir, “Anger Is an Energy,” in 2014. Was preparing this book a difference process? 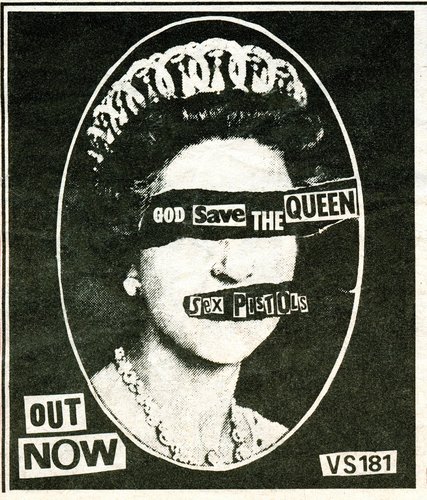 An advertisement for the single “God Save the Queen” by the Sex Pistols, published in May 1977.

For the last book, I had to investigate my own childhood illnesses, and that was something I never discussed with anyone ever, really. I managed to clear my head and became a better person for that. So here’s, my God, a huge pile of songs I’ve written over the years. I think it’s 127 of them. It’s very intriguing for me to go back to the moments I wrote each one and what was flashing in my head. Sometimes it’s just blocks of color or squiggles. It’s a part of my insane thinking process that’s driving me slowly crazy. [laughs]

So when you’re writing a song, you’re not always thinking of what’s immediately in front of you?

Oh, I’m not. With songs, I’ll run them in my head, sometimes for years, before I commit them to paper. And it’s at that exact moment that it all comes flooding back, usually in one solid chunk. I don’t mean to grab any thunder from a man who I did respect as a comedian, but Robin Williams, my God — I’d seen him live once, and he left such a great impression on me, that I’m not the only one who babbles inside his head at a 1,000 miles an hour, in 200 different directions. It was nice to find a kindred confusionist.

Is it tedious to have to revisit your work with the Sex Pistols again?

I don’t blame people for wanting to focus on that first, initial burst. The big bang. But I’ve done ever so much more important work since. That’s what Public Image does. I would have loved to have been a writer, but the written word on its own was never satisfying enough. And music on its own, without me in it, is a little pointless. [laughs]

You wrote some very angry songs as a young man. Can you still tap into that anger now?

It’s the same thing. It’s a young person, and now a slightly older — but not much, in terms of the space-time continuum — asking questions. What is this for? Does that work? How? Explain it to me. Educate me. That’s all I’m doing, is asking questions.

Do you ever want to tell your younger self, “Wait until you’re older — then you’ll really find things to be angry about”?

Oh, no. I understand where you’re going, but believe me, I was fully angry. There was a whole world out there that was sacrosanct and untouchable, like the royal family. Excuse me! I have a valid opinion on these things. Shall I stand up and be counted? And look where that got me.

What soured you on punk rock?

It went horrible when it started to feel packaged and sold as a commodity, rather than a do-it-yourself act of independence. I found that I was really quickly being turned into a pop star there, and I was really uncomfortable with that. For want of a better word — and I’ve tried to explain it, but even this seems to confuse people — I view myself as a folk singer.

I’m one of the folk, and I’m writing about what us folk feel. Thank God for Bob Dylan going electric — it’s his fault.

British punk came out of an era of enormous political upheaval. Do you think America is going through a similar moment now?

It was inevitable. It had swung so far to the left, it’s now going to swing to the right. And neither way will work because they’re too extreme in their attitudes. There’s nothing for people who live in general, and want to be just normal. And this is an odd one for me, I know, because I’m far from normal.

Some people like to say conservatism is the new punk rock. Do you agree with that?

Aaaaaah! No! [laughs] Aaaaaah! There’s better analogies than that. Is Donald the new Sex Pistols? I don’t know, and I don’t think you need to tie things together that way. It’s too easy. That’s lazy intellectualism at work, that is.

You’re a United States citizen now, but do you still keep an eye on the political tumult in the country where you were born and raised?

Frankly, I came to America because, yes, it [Britain] might have been the country I was raised in, but it was very fast becoming the country I was being erased in. The censorship, the police raids, it was absurd, and America seemed to have welcomed me. I became an American a few years back. I’m one of the few that beat the wall.

If you weren’t taking my questions, what would you normally be doing on a day like today?

Hard work, because I’ve got a boiler repairman coming over, and I’m supposed to know something about it. I’ve read the manual. It didn’t get me no further down the road. [laughs] I hate the idea of someone doing something that I could’ve done myself, and probably better, but then again, I don’t have a plumber’s license. I could put a toilet in all right, but as soon as there’s any wiring, it’s like, you know, John, you’re making a bomb! [laughs]