Countering the warm humanism and leftist politics of the muralists, Mr. Cuevas offered an existentialist’s view of the human condition, with hopelessness a given. “Joy wearies me, and I hate happiness when I catch a glimpse of it in a human expression,” he told Newsweek in 1963. 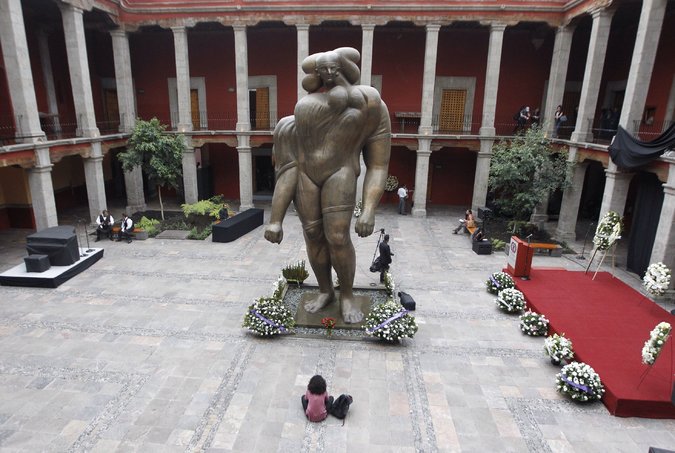 “La Giganta,” on exhibition in January during the 25th anniversary of the establishment of Mr. Cuevas’s museum in Mexico City.

To this bleak project he brought an exquisite hand. “Surely there is not a more refined craftsman at work today than Cuevas, no artist who draws a line with more delicate calculation, who more firmly rejects the impulsive stab or the quick, suggestive squiggle,” the New York Times art critic John Canaday wrote in 1965, adding, “No artist, not even Hieronymus Bosch, has managed to make horror more elegant.”

The family lived over a paper and pencil factory, whose leavings provided José with an endless supply of drawing materials. The exaggerated torsos and spindly limbs of the dolls that hung over his bed — nuns, bullfighters, skeletons — provided a template for his work throughout his life. “They gave me my first notion of how the human body is put together,” he wrote in a memoir, “Recollections of Childhood” (1962).

When he was 12, an attack of rheumatic fever sent him to bed for two years. He spent much of that time drawing the beggars and prostitutes he could see from his window. Before his illness, he had spent one term studying at the National School of Painting and Sculpture, but he was otherwise self-taught.

A solo show at the Prisse Gallery in Mexico City in 1953 drew the notice of José Gómez-Sicre, the artistic director of the Pan American Union, who mounted a show of Mr. Cuevas’s work the next year that attracted widespread attention. His drawings, Time wrote, “powerfully portrayed the hunched reticence of schizophrenia, the hauteur of megalomania, the stares of poverty and disease.”

Shows followed in New York and Paris, where Pablo Picasso bought two of Mr. Cuevas’s drawings, as well as invitations to art festivals around the world, including the 1959 Biennale in São Paulo, Brazil, where a special room was set aside for his drawings.

In 1961 he married Bertha Lilian Riestra, a psychologist. She died in 2000. He is survived by his wife, Beatriz del Carmen Bazán; three daughters, Mariana, Ximena and María José Cuevas; and a brother, Alberto.

In the mid-1960s Mr. Cuevas spent two years at the Tamarind Lithography Workshop, where he produced a series of prints on a favorite subject, the Marquis de Sade.

Although Mr. Cuevas tried oil paints early in his career, he preferred to work in ink, only occasionally using color washes.

In later years he turned to sculpture. For the opening of the José Luis Cuevas Museum in Mexico City in 1992, he created a monumental bronze, “La Giganta,” more than 26 feet tall and weighing eight tons. Another large sculpture, “Figure Gazing Into the Infinite,” made in honor of his wife, was donated to the city and installed in a central area just off the Paseo de la Reforma.

Despite the accolades heaped upon him, including a retrospective in 2009 at the Museum of the Palace of Fine Arts in Mexico City, Mr. Cuevas never quite shed his image as the bad boy of Mexican art.

Certainly, his talent for mischief never deserted him. In 2001, to greet visitors entering the coastal city of Colima, he created “Obscene Figure,” a quasi-human beast in a kneeling position, but with one of its four legs lifted, like a dog by a fire hydrant. The public outcry was intense.