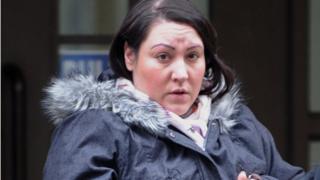 A nanny who shook a 10-month-old boy to death “in a fit of anger” has been jailed for four years.

Viktoria Tautz, 34, was caring for Joshua Paul at his home in Haringey, north London, when he suffered “catastrophic brain and spinal injuries”.

Joshua was rushed to hospital but died three days later.

Tautz had denied prosecution claims she “snapped”. and shook Joshua in a “dangerous and excessive” manner.

The court heard Joshua, who was born 10 weeks early, had a large head for his age and was being monitored.

But at 09:07, a neighbour called 999 after Tautz dashed from the flat shouting for help, holding Joshua who was unconscious and not breathing.

On her arrest, Tautz told police she had played a horse-riding game with Joshua but he had not had any accidents that morning.

Zoe Johnson QC rejected the defence’s suggestion he was hurt in a “horsey game”, as head wobbling involved would have been “nowhere near enough” to kill.

Tautz collapsed in tears in the dock as she was sentenced by Mrs Justice McGowan.

Jailing her, the judge said: “You were not in the same position as a teenage mother in the middle of the night on her own trapped in a flat without anyone to help her.”

Mitigating, Bernard Richmond QC highlighted “worrying features” of the case which led to a “moment of madness”.

He said: “She was a young woman with a very limited amount of training with a baby who had obviously very difficult needs.”

He told the court the defendant, who was paid £3.60 an hour, also lacked “resilience”.

Tautz, of Holly Park Road, Barnet, had denied manslaughter and said she never got “angry” or “frustrated” with the baby.

The Old Bailey jury convicted her with a majority verdict of 10 to 2 after deliberating for nearly seven hours.