Home Lifestyle Art Jules Feiffer and a ‘Hamilton’ Producer Color Outside the Lines for a...

During one tricky moment in the rehearsal, Mr. Lippa (“The Addams Family,” “Big Fish”) stepped out of character and back into his role as composer. When the actors found they didn’t have time to move from one part of the stage to another during “Getting It Right,” the opening number, he suggested adding a little vocalizing to bridge the timing gap.

He ran to a piano to tap out the four notes. “Is that a good thing?” he asked. “That’s a great thing,” answered Spencer Liff, the choreographer.

“Andrew was enriching that moment,” Mr. Seller said later of his longtime friend. “I always defer to my creators.” Now both 52, they’ve known each other since both were 6 in Oak Park, Mich., and Mr. Seller’s parents bought a house from Mr. Lippa’s parents.

“The Man in the Ceiling,” which is aimed at adults as well as children, generally follows the plot of Mr. Feiffer’s book. The 12-year-old Jimmy (Jonah Broscow, who turns 13 on May 30), dreams of becoming a renowned cartoonist, though his mother (Nicole Parker) and father (Danny Binstock) don’t approve of his constant drawing. His older sister, Lisi (Erin Kommor), is bossy but supportive, while his Uncle Lester, a would-be Broadway musical writer, is most in tune with Jimmy’s concerns. Chief among them is his relationship with Charley Beemer (Brett Gray), a cool boy whose friendship Jimmy desperately seeks, though Charley bullies him. 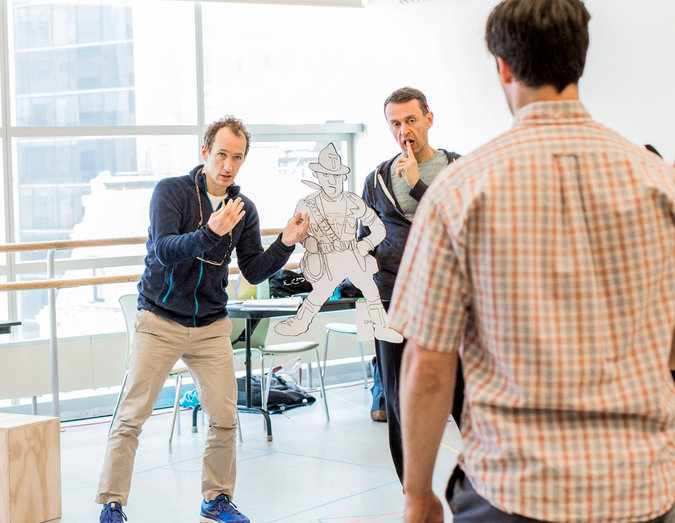 The director Jeffrey Seller, left, and the composer Andrew Lippa in rehearsals.

Mr. Seller came to the project in 2013, though its origins go back many years earlier. His first foray as a director was that year at the Dallas Theater Center, where he staged the musical “Fly.” That same year, Mr. Lippa had given him the script for this show and a CD with songs. He hoped Mr. Seller would evaluate the work and “give me some advice,” Mr. Lippa recalled. “Jeffrey said he wanted to direct it.”

Mr. Lippa’s passion for the material went all the way back to 1996, when he first read Mr. Feiffer’s book after a friend suggested it might make a good musical. “I read it right away, and I wanted to do it right away,” he said.

At the time, Mr. Lippa was working on “The Wild Party,” a jazz-age musical that was eventually presented by Manhattan Theater Club in 2000. “As soon as it was up and running, I asked my attorney to put me in touch with Jules’s representative,” Mr. Lippa said. “Jules came to see it, and he really responded to it. He loved it.”

They went to dinner afterward, Mr. Lippa said, but Mr. Feiffer informed him he was working with another composer: “He told me no.” He called Mr. Feiffer once a year for the next four years, he said, and got the same answer: No.

Then he asked for film rights, and Mr. Feiffer said yes. That turned into a contract with Disney Theatrical Productions, which develops stage musicals, from 2007 to 2009. “It got the show started, but it was not working out. We parted ways very pleasantly,” Mr. Lippa said. He let it rest four years, he said, before contacting Mr. Seller.

At a joint lunch with Mr. Feiffer, “I pitched myself as Uncle Lester,” at first jokingly, Mr. Lippa said. Mr. Seller suggested they do a reading, “to see if we both were suited to our roles.” They decided that they were.

More readings followed. “It’s much richer and more realized than is the book,” said Mr. Feiffer, who is also completing a noir graphic novel and a children’s book. “I’ve had the right collaborators.”

Last year, a reading at a festival for new works at Bay Street “blew the roof off the theater,” said Scott Schwartz, the theater’s artistic director. “People said, ‘Oh, my God, I just love it,’ and ‘I hope you’re going to do this.’”

Deciding to mount a full-fledged production was easy, he said, especially since he wants the theater to produce more musicals and more new works. As for what might be next, no one is speculating — though clearly Mr. Seller, Mr. Lippa and Mr. Feiffer are ambitious men who have worked hard on this show.

“What I foresee,” Mr. Feiffer offered wryly, “is a glamorous future.”