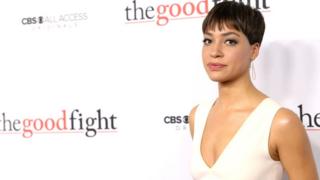 English actress Cush Jumbo says British black actors are being given roles in America over their US counterparts because “we are better”.

The Good Fight star said: “The reason I’m doing so well is our training, our work ethic… we learn our lines.

“Why are we not trying to keep that here… and tell the whole world that we are the best rather than letting people slip through the net?”

Jumbo was speaking to a Labour Party inquiry into access and diversity.

She said she would love to find a job in Britain, but has had to take roles in the USA because there is more work on offer across the pond.

“I would like nothing more than to be working on television and in film in this country,” said the 31-year-old.

Jumbo compared her experience with US drama The Good Fight and its predecessor The Good Wife with her role in ITV drama Vera.

She said she stuck out “like a sore thumb” on the set of Vera and added: “I was the only person of colour.

“You take the cast picture at the end of the season and you look back at it and you’re the one sticking out brown face in a group of people and it hurts.”

Jumbo said Britain was “pulling the plug” on its talent.

The London-born actress said: “I’m just going to go over to Amazon because they will (cast me in a lead role) and they pay for it. Then they offer you another one and another one and, because I write as well, there’s opportunities to write there as well.

“And it becomes less and less attractive to come back because you’re coming back to nothing.

She also said that students from diverse backgrounds were quitting drama school “because of how they are being treated”.

British actor David Oyelowo said last year that he moved to the US because of the lack of opportunity for black actors in the UK.