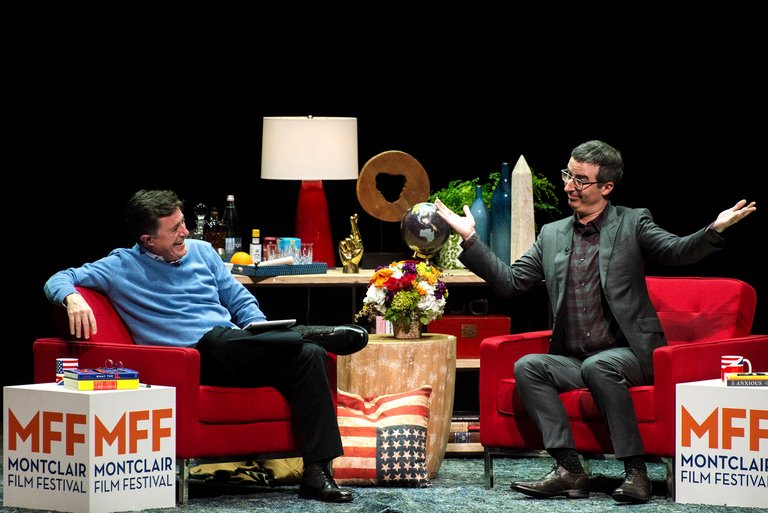 Stephen Colbert, left, and John Oliver in conversation Saturday at “Wow, That Was Weird,” a fund-raiser for the Montclair Film Festival.

NEWARK — As the two late-night comedians sat across from each other on the stage of the New Jersey Performing Arts Center here on Saturday night, Stephen Colbert asked John Oliver why he had not yet been given a commitment for four more seasons.

“There’s a clear road that you can put your foot out,” said Mr. Colbert, the host of “The Late Show” on CBS.

Mr. Oliver, the anchor of HBO’s “Last Week Tonight,” replied brightly but fatalistically: “The kind of road that ‘Thelma & Louise’ drove off.”

Though they didn’t spell it out, the two were talking about the victory of President-elect Donald J. Trump, who, after a months-long barrage of jokes from these and other hosts, is about to assume the highest office in the land.

This live conversation, which was booked several weeks ago and billed with the title “Wow, That Was Weird: A Post-Election Evening With Stephen Colbert and John Oliver,” was meant to be a kind of comic catharsis for the hosts and their audience, many of whom expected Hillary Clinton to win the presidency.

But the event played more like a group therapy session than what it was, a benefit for the Montclair Film Festival, where Mr. Colbert’s wife, Evelyn, is president of its board.

The hosts traded jokes about their lives and careers and current events. But they did not mince words when it came to the anxiety they feel about Mr. Trump’s election, urging audience members not to become complacent.

In recent days, Mr. Colbert said, there has been “a transformation going on in the emotional state of the audience” for his program.

“Now the story has teeth on a level that it didn’t have before,” he added.

His show, and Mr. Colbert’s show, will “need to work out what we become next,” Mr. Oliver said.

Mr. Colbert, who was largely invincible when he played a fake conservative pundit on “The Colbert Report,” is trying to strike the right tone on “The Late Show,” an hourlong network talk show that runs five nights a week. He is coming off a live election-night special, broadcast on Showtime, that became increasingly surreal and funereal as the program wore on.

(On Saturday, Mr. Colbert said little about this special, except to mention that his staff had hired a team of male models, with the slogan “I’m with her” painted across their rear ends, in the event that Mrs. Clinton won. “And then very early on the evening, we were like, ‘You can let those guys go,’” he said.)

Mr. Oliver said it had not been much fun to write jokes about the brutal presidential campaign.

Usually in his line of work, he said, “you try and take things of substance and then put some sugar on it, to make it palatable. But there was so little of substance, this whole campaign, it’s just like a diabetes-inducing amount of sugar. Your job kind of flips on its head.”

Somewhat facetiously, Mr. Oliver, who is a British citizen, talked about whether his frequent comedic jabs at Mr. Trump might mean that he now has to return to his home country.

Mr. Colbert asked him, “Are you peering out the windows?”

Mr. Oliver replied, “No, but one day, like ‘Jurassic Park,’ maybe I’ll see the water shifting and go, ‘Here they come.’” (He noted that his wife, who is American, was his “legal parachute.”)

When Mr. Colbert asked how Americans could resist the inclination to normalize Mr. Trump’s most extreme viewpoints and policies without living perpetually “at an adrenaline fever pitch,” Mr. Oliver answered that it was dangerous to overlook the pain of people whose lives and routines are “going to be shattered.”

“Not everyone is going to be O.K.,” Mr. Oliver said. “You have to keep remembering that this is an abnormal version of what we’ve been through before.”

Mr. Colbert replied, “I don’t have anything to compare it to. We haven’t flirted with strongmen before.”

Mr. Oliver agreed. “This is a flirtation,” he said. “This is coquettish.”

Discussing the apparent rise of websites that traffic in bogus news stories, Mr. Colbert objected to this content being described as “fake news.”

Referring to his and Mr. Oliver’s time at “The Daily Show,” he said, “What we did was fake news. We got on TV and we said, ‘This is all going to be fake. We’re going to make fun of news.’”

Mr. Colbert added, “The fact that they call this stuff fake news upsets me, because this is just lying.”

Mr. Oliver said that Britain was swept up in a similar atmosphere of media distrust this past summer, just before Brexit, the vote in favor of withdrawing from the European Union.

When politicians declared that the populace was tired of experts, Mr. Oliver said, “people laughed – and then they stopped laughing, hard, when the results of the election came in.”

At the end of the evening, the two fielded questions from audience members, like which posed a bigger threat to a Trump administration: global warming or the cast of “Hamilton”?

Mr. Colbert quipped, “I think Trump is only going to do something about one of those.”

When another audience member asked just how much trouble they thought the nation was in, the two hosts seemed to find it difficult to be humorous.

Mr. Oliver added, “I don’t know if there is too much concrete evidence to be too comfortable, going forward.”

Mr. Colbert said that though “everybody tried to stop Trump,” he prevailed nonetheless. “He owes the checks and balances of Washington nothing, because they tried to stop him and they couldn’t,” he said. “And he’s a vindictive person.”

“So, it’s all going to be fine,” he said archly, to some laughter. “Merry Christmas.”