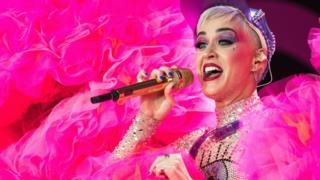 “This makes me feel cool,” the star told the crowd

It was less crowd-surfing than crowd-swimming, as the singer pulled herself slowly over the heads of her fans.

“Well, Beyonce never did that,” joked one audience member as Perry emerged from the fray.

The stage dive came as the star performed Roar at the end of 60 colourful minutes of pure grade pop, including the hits Firework and ET.

The star brought something that the Pyramid Stage never usually sees – choreography – as well as glitter cannons, silver-clad backing singers, and dancers dressed as giant eyeballs.

“This makes me feel cool,” remarked Perry as she observed the crowd. “I don’t really ever feel cool.”

“There’s so many people here,” she added. “I didn’t know if you still liked me.”

The comment was presumably in reference to the relatively poor performance of her new album, Witness, which entered the charts at number six last week.

In truth, most of the audience had come for the earlier hits – I Kissed A Girl, Teenage Dream, California Girls – which prompted mass sing-alongs from the younger elements of Glastonbury’s audience.

The newer material was less enthusiastically received; although a spirited rendition of Chained To The Rhythm, which saw Perry trade impromptu dance moves with a security guard, proved to be a lot of fun.

Jumping between DJ turntables and the front of the stage, he tore through a set that combined his greatest hits and a raft of R&B classics, including No Scrubs and One Dance.

Clearly enjoying himself, the star rewrote his lyrics on the fly, at one point singing: “I wanna be yours, Glastonbury, and spend the whole night with you”.

As the set drew to a close, he thanked fans who had “stuck with me since 1999”, when he scored his first hit, as a guest vocalist on The Artful Dodger’s Re-Rewind (The Crowd Say Bo Selecta).

David’s crowd was undoubtedly bolstered by Jeremy Corbyn’s supporters, who arrived to see the Labour leader give a speech and introduce the next act, US hip-hop group Run The Jewels.

Corbyn delivered the political equivalent of a greatest hits set, running through some of his key policies on immigration,. social equality and arts education; as well as quoting Percy Bysshe Shelley’s poem The Masque of Anarchy.

Liam Gallagher, appearing on The Other Stage, sang the Oasis hit Don’t Look Back In Anger for the first time ever (his brother Noel sang the original), dedicating the song to victims of Manchester and London attacks, and the Grenfell Tower fire.

US singer Maggie Rogers, who shot to fame after a video of Pharrell Williams listening to her music went viral, drew a large lunchtime crowd to the John Peel stage.

As well as the song that impressed Pharrell, Alaska, she twirled and pirouetted her way through the current single On/Off and a wonky cover of the Spice Girls’ Wannabe, with indie singer Declan McKenna.

“That one was just for me,” she joked. But the singer was clearly moved by the turnout and response to her set, wiping away tears as she thanked the audience.

Saturday night’s headliners are Foo Fighters, who take to the Pyramid Stage two years after they were initially booked.

Frontman Dave Grohl had to pull out of the show after falling off stage and breaking his leg, two weeks before the festival.

Tonight’s performance will be “a big make-up date,” he told Radio 1 this week.

“We get to headline Glastonbury but also I get to do it standing on two legs. It means a lot to me, personally. It’s part of my recovery in a weird way.”