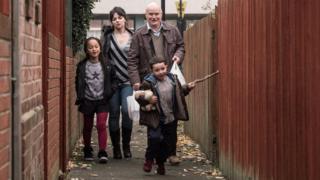 I, Daniel Blake has topped the nominations for this year’s British Independent Film Awards (Bifa).

The film, which was directed by Ken Loach, is nominated in seven categories, including best British independent film, best director and best screenplay.

Other nominees include American Honey, Notes on Blindness and Under The Shadow, which received six apiece.

The winners will be announced at a ceremony at London’s Old Billingsgate on Sunday 4 December.

I, Daniel Blake – about a middle-aged widower and the UK welfare system – was released in the UK last week, five months after it won the Palme d’Or at the Cannes Films Festival.

The nominees alongside I, Daniel Blake in the best British independent film category are American Honey, Couple In A Hole, Notes on Blindness and Under The Shadow.

American Honey’s Andrea Arnold receives her fourth nomination in the best director category, having won for Fish Tank in 2009.

Loach’s best director nod his is fifth Bifa nomination. He won the category in 1998 for My Name Is Joe, the same year he was awarded a lifetime achievement award.

It was announced last month that Naomie Harris will receive the Variety Award, given annually to a director, actor, writer or producer who has helped champion British cinema internationally.