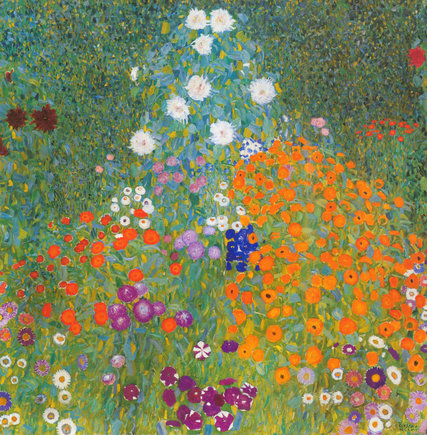 The auction house Sotheby’s has announced that “Bauerngarten,” a dazzling 1907 landscape painting by the Viennese modernist Gustav Klimt, will lead its Impressionist and Modern Art sale on March 1, in London. This marks the first time in more than two decades that the oil painting has been offered at auction, where it is expected to fetch in excess of $45 million.

Until his death in 1918, Klimt painted landscapes in the Salzkammergut region of Austria, at Lake Attersee and elsewhere. “There,” according to a Times travelogue from 2013, “he shed city clothing for floor-length robes, temporarily abandoned his city mistresses and traded stylized portrait painting for the bracing, vivid landscapes of his summer idyll.” Klimt returned to Lake Attersee for 15 summers, the Times report continues, creating more than 45 of his 50 landscapes in the tiny lakefront towns of Seewalchen, Litzlberg and Weissenbach.

“Bauerngarten” was most recently exhibited in 2016 at the Royal Academy of Arts, in London.

An earlier version of this article misstated Sotheby’s estimate for the sale of Klimt’s “Bauerngarten.” It is $45 million, not 45 million British pounds (or about $56 million). The error was repeated in a headline.