The festival would probably not have been possible before the reunification of Germany, its organizers say. But in the years since, Dessau (located in the former East Germany) has been home to the founding of a Weill society, as well as a Kurt Weill Center at the Bauhaus, another local treasure.

There has also been a rise in the number of Weill’s American works performed in Germany. This fall, a new critical edition of “Love Life” (1948) — a magical story about a marriage that spans more than 150 years and is told through vaudeville acts that prefigure concept musicals like “Chicago” — will have its premiere in Freiburg. And major Berlin theaters, such as the Komische Oper, will celebrate the 100th anniversary of Weill’s arrival there by including staged and concert performances of his Broadway shows in their 2018-19 seasons.

During this year’s festival, Weill was all over Dessau: banners scattered throughout town, posters lining the shopping center’s gallery, even Weill-themed menus at restaurants. (The Kornhaus, for example, offered a “Mack the Knife” veal saddle steak.) All this for a composer not given proper attention for decades, and who in his lifetime was a divisive musician who didn’t fit into common narratives about Germany’s cultural exiles under Nazi rule. 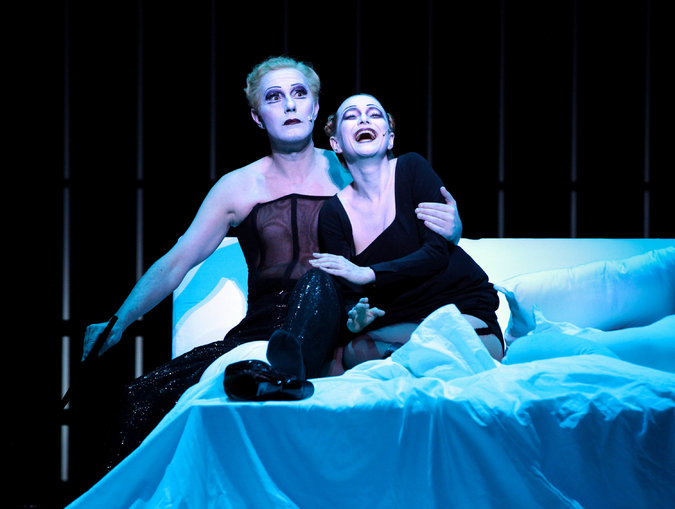 Stefan Kurt, left, and Stefanie Stappenbeck in a production of Weill’s “The Threepenny Opera” at BAM in 2011.

Throughout the 1920s, Weill — part of the November Group of radical artists that included painters like Otto Dix and Wassily Kandinsky and the architect Ludwig Mies van der Rohe — tapped into idioms from popular music in Berlin, like jazz and cabaret. In doing so, he tacitly spurned the methods of Arnold Schoenberg and Second Viennese School composers like Alban Berg, said Kim Kowalke, a University of Rochester professor and, since 1981, president of the Kurt Weill Foundation in New York.

H. K. Gruber, a composer and conductor widely considered one of the pre-eminent interpreters of Weill, said that while Schoenberg was introducing his 12-tone technique, Weill “found his own way remaining in the tonal idiom.”

“He brought complexity and popular music under one hat,” Mr. Gruber added. “It makes no difference between light music and serious music — just a kind of music which is simply honest.”

Mr. Gruber’s piano concerto, which has its German premiere with the Berlin Philharmonic on March 16, oozes with Weill’s aesthetic: intricate, taut orchestration coexisting with a winking, yet sincere, undercurrent of jazz rhythms and riffs. (The concerto had its world premiere in January with the New York Philharmonic, on a program that opened with Weill’s “Kleine Dreigroschenmusik,” a suite from “The Threepenny Opera.”) And this fall, San Francisco Opera will give the premiere of John Adams’s “Girls of the Golden West,” which he told The Financial Times will “come out sounding very much like Weill.”

Much of Weill’s music was well received in the 1920s. But the Nazis labeled his work degenerate; he left the country soon after the premiere of “Der Silbersee” (“The Silver Lake”), which was banned by the Nazis, along with the rest of his oeuvre, and shut down after only a handful of performances. After the war, Weill was viewed with suspicion on two counts.

“He was never forgiven for being Jewish and leftist,” Dr. Kowalke said, “and he wasn’t forgiven for not wanting to come back.”

Brecht came back. Hanns Eisler, another Brecht collaborator, came back. But Weill didn’t, and thus was seen as a traitor, said Michael Kaufmann, artistic director of the Kurt Weill Festival.

“It was like a continuation of how the Nazis treated Kurt Weill,” he said of postwar Germany. “His music was not welcome, he was out. And there were five or six German critics who declared that same stuff.”

In the United States, Weill collaborated with writers like Ira Gershwin, Moss Hart and Langston Hughes on innovative — and occasionally blockbuster — Broadway musicals. In these shows, Mr. Gruber said, “you can find the complexity of his European music,” just with a different style. Adorno wrote that Weill had sold his soul; Jürgen Schebera, a Weill biographer, said the situation was more complicated.

“He could not write a new ‘Mahagonny’ on Broadway,” Mr. Schebera said, referring to “Rise and Fall of the City of Mahagonny,” Weill’s savage 1930 opera with Brecht that was performed at this year’s festival in a production imported from Oper Halle, about 30 miles away from Dessau. “He had to look at what was in America, and that was Broadway. And then he asked himself, ‘What can I do to make Broadway better?’”

Dr. Kowalke said that there are few 1940s musicals as daring as “Street Scene” (1947), Weill’s so-called “Broadway opera” about two days in the life of a New York City tenement block’s residents; “Love Life,” which featured a book by Alan Jay Lerner, who went on to write “My Fair Lady”; or his final work, “Lost in the Stars” (1949) with which Weill tried to prove that a musical tragedy could exist in American theater. Hal Prince was in the audience at these shows, Dr. Kowalke added, as were other Broadway luminaries like Stephen Sondheim, Leonard Bernstein and the team of Kander and Ebb, who later gave a starring role to Weill’s widow, Lotte Lenya, in “Cabaret.”

But those shows were virtually absent in Germany until the 1990s. There was a German production of “Street Scene” in the 1950s, but Adorno’s damning program notes virtually sabotaged it; the opera wasn’t performed with success until Francesca Zambello’s 1995 staging in Berlin. Dr. Kowalke pointed to that as a turning point in Germany’s treatment of Weill, made possible by both reunification and changes in the music community.

“Reunification made the opportunity for East Germany to discover Weill, starting with the European Weill,” Dr. Kowalke said. “Then the Adorno myth that all roads lead to and from Schoenberg — there weren’t too many people who still believed that in the ’90s. The field was ready for tilling at that point.”

Mr. Schebera was one of the founders of the Weill Festival, which started with a series of concerts over one weekend. It grew into an annual, multiweek event centered around Weill’s birthday on March 2, but Mr. Schebera said the fledgling event struggled without the help of the Anhaltisches Theater in Dessau, whose artistic director was so uncooperative that at one point he scheduled a cycle of Verdi operas for the same time as the Weill concerts. Still, under the leadership of Mr. Kaufmann, who will leave his post as artistic director after this year’s festival, attendance has more than doubled since 2008, to over 18,000.

Weill’s presence in Dessau continues to grow as well. The humble Kurt Weill Center, inside one of the Bauhaus “masters’ houses” designed for professors, is set to expand into a second house with a new permanent exhibition later this year. Other plans include a new synagogue — funded by the Kurt Weill Gesellschaft, the society that organizes the festival — on the site of the destroyed one where his father worked.

Thomas Markworth, president of the Weill Gesellschaft, pointed to a man-on-the-street news segment on the German network MDR in the early 1990s, in which actors asked people in Dessau whether they knew who Kurt Weill was.

But, he added, MDR repeated the exercise three years ago. This time the answer was different: “They said, ‘Yes, he was born here,’” Mr. Markworth recalled, “or ‘Yes, here we have the festival for Kurt Weill.’”

John Lazaridis, who lives in Dessau, said during the festival: “The city has adopted him. The festival has brought Kurt Weill alive. We know about him, but also we embrace him as well now.”

“The Ballad of Mack the Knife” from “The Threepenny Opera” (1928) This song, one of the last written for the show before opening night, went on to transcend both theater and the life of its writers, Weill and Brecht. It rose to popularity with covers by Bobby Darin, Louis Armstrong and Ella Fitzgerald, among other musicians.

“Alabama Song” from “Rise and Fall of the City of Mahagonny” (1930) This tuneful moment in Weill and Brecht’s opera was originally part of their first collaboration, the song cycle “Mahagonny” (1927). Like “Mack the Knife,” it has been covered many times — most notably by the Doors in the 1960s.

“Introduction” from “The Seven Deadly Sins” (1933) After Weill fled Germany and settled briefly in Paris, he worked with Brecht one last time on this “ballet chanté” (sung ballet) choreographed by George Balanchine, who later founded New York City Ballet, for his upstart troupe Les Ballets 1933.

“Johnny’s Song” from “Johnny Johnson” (1936) Weill’s first stage work in the United States was this collaboration with the Pulitzer Prize-winning playwright Paul Green. (Later writing partners included Ira Gershwin and Langston Hughes.) This song closes the musical, about a young pacifist who is ruined by war.

“September Song” from “Knickerbocker Holiday” Weill’s most popular American song, like “Mack the Knife,” was written in haste toward the end of the show’s development. Its bittersweet lyrics — “It’s a long, long while from May to December, and the days grow short when you reach September” — lent the song to a variety of covers, including this one by Weill’s widow, Lotte Lenya.