In his understated manner, Mr. Bewkes said he was not worried about the White House interfering in the deal. “I know people say things like that,” he said in an interview last week. “I don’t think it is true.”

Mr. Bewkes said that the review of the proposed merger was an antitrust analysis of whether the combination would enhance or harm competition, and that Time Warner’s programming — including CNN’s aggressive reporting on Mr. Trump — was not relevant.

Still, Mr. Trump’s hostility toward CNN has thrust the network into the spotlight as the review of the deal continues. The issue of CNN’s editorial independence arose late last month at a dinner Mr. Bewkes attended with AT&T board members in Dallas.

As Mr. Bewkes was providing a rundown of Time Warner’s divisions, he said, he was asked about CNN, which had just made news by retracting a story about Anthony Scaramucci, a Trump confidant who is now the president’s communications director. Three journalists who worked on the story were ultimately forced to resign. He defended that decision, and told board members the network’s independence was “sacred.”

If Time Warner is folded into AT&T, it will mark the end of an era, for both an executive who rose through the corporate ranks after starting as an HBO staff member in 1979 — using a stack of boxes as a desk — and a media conglomerate. Over the past century, dating to its roots in Time Inc., the company ushered in a series of innovations, including the first weekly magazine in the United States, the first talking feature film, the first premium cable network, the first 24-hour news network and, on Mr. Bewkes’s watch, a push toward video-on-demand and other digital offerings.

In an industry filled with larger-than-life executives, driven to expand their empires, Mr. Bewkes developed a reputation as a cerebral, private figure with a dry sense of humor, who was focused on creating value for investors. He did so by spinning off Time Warner Cable in 2009, AOL the same year and the Time Inc. magazine division in 2014.

What was left was a focused TV and film company. Mr. Bewkes invested in ambitious programming, including original series on HBO like “Game of Thrones,” sports deals like the N.C.A.A. basketball tournament and big bets on major film franchises like the “Harry Potter” movies and the “Lord of the Rings” trilogy.

As a result, Time Warner was positioned as an attractive takeover target.

Mr. Bewkes’s success can be attributed to “being very, very rational in his decision making and, on the other hand, having a real flair for the creative,” said Michael Lynton, a longtime media executive who was at Time Warner when it merged with AOL. “That is a rare combination.”

There is no question that Mr. Bewkes has delivered value to shareholders. A $1,000 investment in Time Warner stock when he became chief executive in 2008 would be worth about $4,400 today. 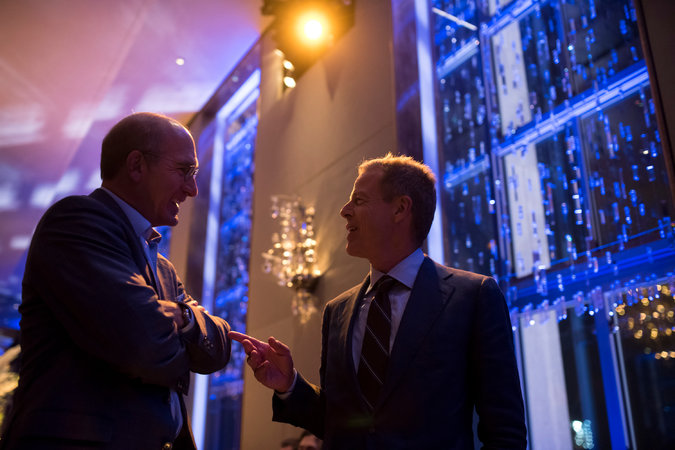 John Stankey, the chief executive of AT&T’s entertainment group, with Mr. Bewkes at the “Dunkirk” event. Mr. Stankey is expected to assume Mr. Bewkes’s role if a merger with Time Warner is approved.

Should the deal with AT&T be completed, attention will turn to Time Warner’s properties as new corporate owners try to manage a business that sometimes brings controversy.

Mr. Bewkes said that the heads of Turner, Warner Bros. and HBO — all of whom had been viewed as candidates to succeed him — are expected to continue in their roles. The job of managing those assets, now Mr. Bewkes’s role, is expected to be assumed by John Stankey, the chief executive of AT&T’s entertainment group.

AT&T’s priority, Mr. Bewkes said, will be to find new ways to present programming to audiences. “I don’t believe they think their focus is about what to do about HBO’s programming schedule or how to mess around with the Warner show slate,” he added.

CNN, however, is expected to draw extra scrutiny. Mr. Trump’s criticism has focused attention not just on the network but on its embattled president, Jeffrey A. Zucker, whom Mr. Trump believes has been disloyal to him. And CNN has put itself on the defensive with damaging missteps, including the retracted story last month.

That issue arose at the dinner last month in Dallas with AT&T board members. When the discussion turned to CNN, Mr. Bewkes said, he supported Mr. Zucker’s handling of the retracted story. He argued that CNN was a successful and growing business, citing its global news operations and its push toward mobile platforms. CNN brings in more than $1 billion a year in profit.

“It is a huge achievement of the whole company under Jeff’s leadership,” Mr. Bewkes said in the interview.

In recent weeks, Mr. Trump has ratcheted up his attacks on CNN. He also stated publicly, without evidence, that management changes could be coming to the network.

Asked for his reaction to comments by the president — especially those attacking CNN — Mr. Bewkes said that he did not think they were relevant to how the network covered news or the review of the proposed deal between AT&T and Time Warner.

“I think statements out of high political office ought to be considered statements,” he said.

“We have always been a public-trust journalism company,” Mr. Bewkes said in the interview. “We have all kinds of critics that say we failed.’’ He alluded to CNN’s having been criticized during the campaign for its extensive coverage of Mr. Trump and being attacked by Mr. Trump for coverage he deemed unfair.

“We either elected the president by giving him airtime — when in fact nobody else would come,’’ he said, “or we have been trying to not elect him by doing something with an agenda, which I hope isn’t the case.”

So far, there is no clear indication of how AT&T might manage CNN. Shortly after the deal was announced, Randall Stephenson, AT&T’s chief executive, declared that CNN was “an American symbol of independent journalism” and said later “the last thing we want’’ was to taint its independence.

As he prepared to move on, Mr. Bewkes said he had few regrets. The $850 million acquisition of the social networking site Bebo was a flop, he acknowledged. And he said the company should have bought Netflix in its early years and taken full control of Comedy Central when it had the chance.

But he noted that Time Warner networks have recruited several stars from Comedy Central, including Jon Stewart and John Oliver on HBO and Samantha Bee on TBS, although Mr. Stewart’s first HBO project did not pan out.

Mr. Bewkes jokingly lamented the decision to allow Time Warner Cable to hold on to the Time Warner name, which has led cable customers to call him with complaints about their service. (He said he still received about 10 a day.)

Mr. Bewkes said he was focused for the moment on closing the deal with AT&T and, until then, continuing to manage Time Warner. He said he was not sure what he would do next.

“If I was following the crowd, I guess I would just run for president like everybody else,” he joked, before adding that at 65 he was not in a rush to take on another job like his current one.

“How could you do something like this, after this?” he asked. “This is great.”