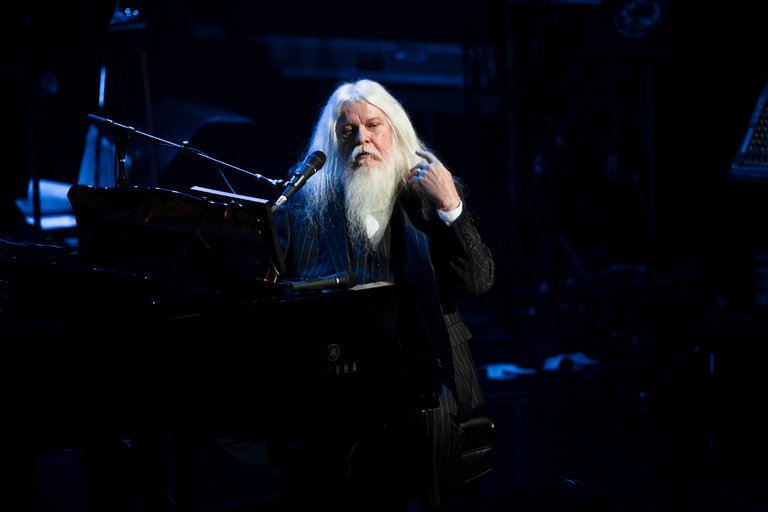 Leon Russell at the Beacon Theater in Manhattan in 2010.

There’s some remarkable footage of Leon Russell from late 1970, the year he released his self-titled debut solo album. Taken from an hourlong special, “Homewood,” originally broadcast on Los Angeles public television, it circulated in bootleg editions for decades before the audio surfaced on CD this year in what appears to be a sanctioned release.

Mr. Russell, who died on Sunday at 74, certainly had more visible and consequential moments in his career — as a songwriter, a bandleader and a singer. But there may not be a truer distillation of his raw magnetic presence, or the scene that once surrounded him, than what you see in this television footage, characterized by the show’s host, Charles Champlin, as “the distillation from an extraordinary six-hour session of music-making and music-enjoying.”

So here is Mr. Russell at the piano, 28, outlaw-thin, in a shirt striped with red, green and black. He’s wearing a medallion and mirrored aviator shades, presiding over a shambolic but somehow grounded jam with a circle of collaborators like the guitarist Don Preston. There are a few false starts, but the band sounds fantastic, with Mr. Russell decisively driving the action with his rollicking piano and soulful, gravelly cry.

The set includes what would become his calling card, “A Song for You,” and a ferocious romp through a lesser-known original, “Prince of Peace.” But Mr. Russell also plays material by Bob Dylan, Van Morrison and the Rolling Stones, always with his own Southern slant.

He seems happy to be an instigator, the host of a party. The veteran country blues singer Furry Lewis briefly assumes the center of attention as an honored guest. Emily Smith, a mainstay of the scene in Mr. Russell’s hometown, Tulsa, Okla., struts around during “Sweet Emily,” which he wrote in her honor. (She also bakes a pie.) A few other people hang around, slouching in beanbag chairs. A baby is passed around.

The footage shows a side of Mr. Russell that sometimes isn’t emphasized enough. Despite the inherent solitude of a songwriter’s craft, and his long season of obscurity, Mr. Russell was an incredibly gifted collaborator. This was truest during his most productive years — the era of “The Homewood Sessions,” and again in the last decade of his life. Here are five other moments worth lingering over.

Mr. Russell was the backbone and ringleader of Joe Cocker’s hastily assembled “Mad Dogs and Englishmen” tour in 1970. This performance of “Delta Lady,” a carnal strut that Mr. Russell wrote for Mr. Cocker, captures the band’s joyous cacophony of horns, belting vocals and barrelhouse piano. “Rock and roll,” Mr. Cocker says, exultant, after the song seems to have come to an end. Then Mr. Russell revs up the piano vamp again, unwilling to let the feeling go.

“A Song for You,” Donny Hathaway live at the Troubadour, Los Angeles, 1971

Among the dozens of showstopping versions of “A Song for You” — by Aretha Franklin, Ray Charles, even Mr. Russell — there isn’t one more sublime than Donny Hathaway’s solo encore in Los Angeles, in 1971. Alone at the piano, working with a rhapsodic patience, Mr. Hathaway teases out a tension in the song: Its chastened entreaty is pitched to an audience of one, but it is also an ecstatic testimony in a room full of admirers.

This medley of hits by the Rolling Stones and the Coasters was Mr. Russell’s breakout moment at the Concert for Bangladesh in 1971. But it was also a staple of his live show, and the version he recorded a year later for the essential album “Leon Live” stretches past 15 minutes, with stomping fury and a charismatic, riffing segue worthy of a tent-show revivalist preacher.

George Benson made “This Masquerade” a Top 10 hit in 1976, and then record of the year at the Grammys. But the original, which Mr. Russell released in 1972 as a B-side to his single “Tight Rope,” better highlights the elegant construction of the song. Singing in an understated murmur over a light rhythmic waft, Mr. Russell fills in a portrait of dawning romantic disillusionment, tracing a melody whose casual sophistication recalls the best of Antônio Carlos Jobim.

Elton John sought out Mr. Russell, a formative influence on his own music, for “The Union.” This album was the cornerstone of Mr. Russell’s late career resurgence, and this track, one of several he composed, is a note of gratitude in sashaying waltz time. The final stanza couldn’t be clearer in purpose:

Correction: November 14, 2016
An earlier version of this article misstated the day Leon Russell died. It was Sunday, not Saturday.