Speakers on Thursday, including Mr. Soros; the German Minister of State for Europe Michael Roth; and the secretary general of the Council of Europe, Thorbjorn Jagland, lamented that Europe’s Roma still experience discrimination regularly. Members of the Roma community spoke of pressure to abandon their ethnic identities, with Mr. Jovanovic describing the heritage as a “source of shame” for many. 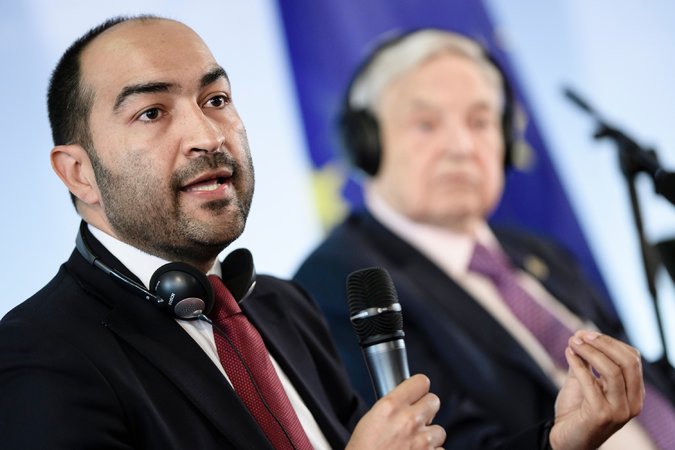 Zeljko Jovanovic, chairman of the board of the European Roma Institute for Arts and Culture, left, with George Soros.

Supporters of the institute hope that the project will serve as a newfound source of pride for Europe’s Roma and promote more positive views of them.

“Today we are focusing on what the Roma culture can contribute to open the eyes of people across Europe to the richness of its culture, and therefore to help with doing away with prejudices and stereotypes about Roma people,” Mr. Jagland said. “This institute will of course be a very important place for empowering the Roma people itself to make it proud of its history and culture, but also of course to spread the Roma culture across Europe.”

Mr. Soros, whose charitable foundation will provide the institute with 200,000 euros per year (about $220,000) through its five-year start-up phase, said the best way to support the people is to position them to advocate for themselves.

He also noted the importance of acknowledging Germany’s past, including the genocide that took place during the Nazi era. Hundreds of thousands of Europe’s Roma were killed during the Holocaust.

Timea Junghaus, director of the institute, said her team was searching for office space in central Berlin. She added that the organization will focus not only on arts and culture, but also on Holocaust research and how best to build on the works of related organizations across Europe.

“The European Roma Institute for Arts and Culture is a result of the activism and hard labor of three Roma generations,” Ms. Junghaus said.