The result, somewhat anticlimactic, encapsulated how much the art and antiques trade — and interiors themselves — have changed in recent years.

“More and more people want funky postwar design, pictures and decorative objects — and maybe one signature antique,” said William Rouse, managing director of Chiswick Auctions, a suburban London salesroom that is aiming to capitalize on Christie’s departure from South Kensington, one of the city’s most affluent neighborhoods. “They don’t want big lumps of brown furniture.”

Chiswick Auctions holds live weekly sales covering about 16 collecting areas, with most of the lots estimated at £100 to £1,000. Trying to move more upmarket, the company has leased a space five minutes’ walk from Christie’s former salesroom. The venue, as yet undisclosed, is set to open on Sept. 1 and will be used to display higher-quality items, with 10 former Christie’s employees recruited to run the expanded operation. 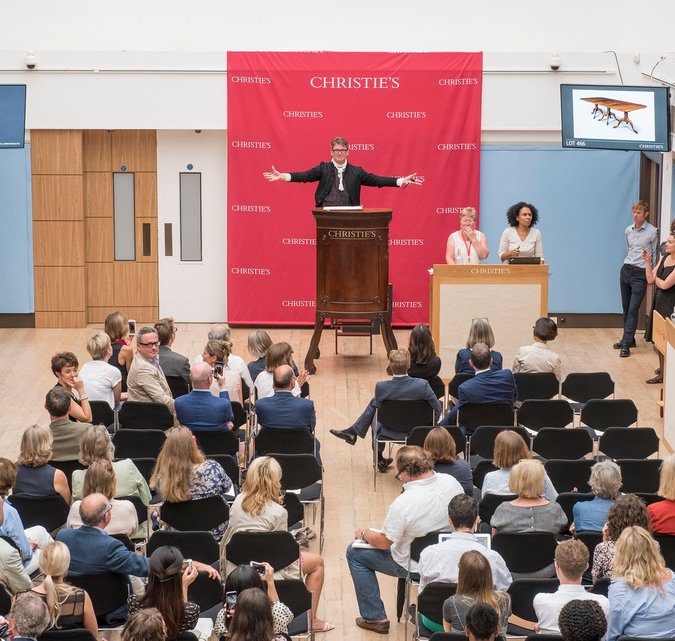 The “Interiors” sale at Christie’s South Kensington on Wednesday.

“There’s clearly money to be made selling lots estimated between £500 and £10,000,” Mr. Rouse said. “Our vendors prefer old-fashioned sales. Lots bought at online auctions are easily returnable, and that can be a nightmare.”

Mr. Rouse pointed to the growth of collectibles such as handbags, watches and other fashion items. On May 23, a black Hermès Kelly handbag sold at Chiswick Auctions for £12,200 with fees — a salesroom high for such an item at the company — albeit rather less than the $380,000 Christie’s achieved a week later in Hong Kong for a white crocodile skin Hermès Birkin bag adorned with gold and diamonds.

Luxury items have grown into one of the four biggest income earners at Christie’s, based in London, which on Wednesday announced half-year worldwide auction sales of £2.2 billion, or about $2.8 billion, a 29 percent increase on the equivalent period in 2016, despite the scrapping of its summer London auctions of contemporary art. (Unlike its publicly traded rival Sotheby’s, Christie’s is a private company and is not obligated to release its costs and profits.) Comparative auction sales at Sotheby’s were $2.5 billion, up 8 percent on the first half of last year. (The company’s full results will be published next month.)

Christie’s auction sales of items such as handbags, wine, watches and jewels were actually down 13 percent in the first half of 2017, compared with the period a year earlier. But it is a measure of the “luxurification” of the 21st-century market that the £253.6 million total was still four times the combined total of £63.8 million achieved for old masters, 19th-century pictures and Russian art during the same period.

Asian art (£430.9 million), Impressionist and modern art (£698.6 million), and postwar and contemporary art (£605.1 million), all of which saw increased auction sales, were Christie’s other main money spinners in the first half of the year.

Some exceptional one-off auction results in May, such as the $57.4 million for a Brancusi sculpture at Christie’s and the $110.5 million for a Jean-Michel Basquiat painting at Sotheby’s, as well as a succession of seven- and eight-figure sales of “classic contemporary” works at the Art Basel fair in June, have created the impression that the market for modern and contemporary art is again humming.

But away from those widely reported “blue chip” sales, mainstream auction houses and dealers are still trying to recover from the bursting in 2015 of the speculative bubble in young abstract art. A silver monochrome by Jacob Kassay or a “Rain” painting by Lucien Smith might look a lot funkier than English brown furniture, but cooling values for emerging artists have also prompted new sales strategies.

“A new type of collector entered the market who bought to sell. They were treating art like a stock, tracking it by the quarter,” said Joel Mesler, a seasoned midtier New York artist and gallerist, who in May relocated his dealership, Rental Gallery, to East Hampton on Long Island. “Because they got in so quick, they got out as quickly as they got in. It changed the landscape instantly,” Mr. Mesler added. “The smart ones moved up a tier and looked at artists who had careers. The new collector is looking at undervalued names.”

To that effect, Rental has been showing “Color People,” a selling exhibition of works by 13 predominantly African-American painters, curated by the artist Rashid Johnson. With Mark Bradford representing the United States at the Venice Biennale and the major retrospective “Soul of a Nation: Art in the Age of Black Power” on show at Tate Modern in London, African-American art will have had some good exposure in 2017. But works such as the daringly engaged and garish 1992 figurative painting “Last Rights: The Spirits of the Dead Are Watching” by Robert Colescott, who represented the United States at the 1997 Venice Biennale, have proved an eye-opener for collectors. It is priced at $150,000 — less than half the $372,120 that a large Lucien Smith “Rain” canvas, painted with a fire extinguisher, sold for at Sotheby’s in 2014, according to the Artnet database of auction results. Last month, a similar-size “Rain” painting sold at Phillips for $35,732.

Collectors’ tastes in art are evolving all the time, and so are the ways of selling it. Christie’s said this week that it remained “deeply committed” to traditional collecting categories. Christie’s South Kensington’s “Interiors” auctions and its quirky “Out of the Ordinary” live auctions of unusual items will transfer to the St. James’s headquarters, as will its “First Open” sales of more affordable contemporary art. At the same time, 250 to 270 jobs in the company will be eliminated by the end of the year.

Guillaume Cerutti, Christie’s chief executive, recently referred to the digital space as being the “Christie’s South Ken of the 21st century.” But in the first half of 2017, at a time of overall growth in auction sales, Christie’s held 35 online-only auctions compared with 118 digital sales the previous year.

Patrick Kennaugh, an art dealer based in London, who was at the final auction at Christie’s South Kensington, said the salesroom’s closing was “ a terrible shame. It’s been my church.” Mr. Kennaugh, 64, remembered buying his first picture there in 1977 for £8, or about $15 at the time. He quickly sold it for £10 at his stall at Portobello Market. Recently, Mr. Kennaugh has been more of a satisfied seller than a buyer at the salesroom.

“I don’t think it’s a wise move. It doesn’t make sense,” he added, referring to the closing.

Time will tell if Mr. Kennaugh had a point.