The company introduced a brand-new version of the iPad Pro with a 10.5-inch display, which is 20 percent larger than the previous 9.7-inch model. Apple said the size made it perfect for displaying a virtual keyboard that was comparable to a full-sized physical keyboard. Apple said the biggest breakthrough was a feature called ProMotion, which increases the refresh rate and makes motion smoother in video content.

After Steve Jobs introduced the original iPad in 2010, tablets quickly exploded in popularity. Yet for more than a year now, iPad sales have shrunk. So Apple, under increasing pressure from investors to grow sales, has upgraded the iPads more frequently than many of its other products, including the addition of a lower-cost version of the 9.7-inch iPad priced at $329 in March and a 12.9-inch iPad Pro, which was compatible with an Apple stylus and keyboard, in 2015.

Some of Apple’s rivals have capitalized on the iPad’s stumbles. Amazon recently said its tablet sales have grown by double-digits compared to last year. Amazon’s Kindle Fire tablets are extremely cheap, starting at $50, and are capable of basic functions like reading e-books, streaming Netflix and listening to music.

Apple’s predicament seems to be that for existing iPad customers, their tablets are still quite capable and running strong, giving them little reason to upgrade. For new customers, the iPad may be overkill for accomplishing basic tasks, especially if you can just pay $50 for a media tablet from Amazon. 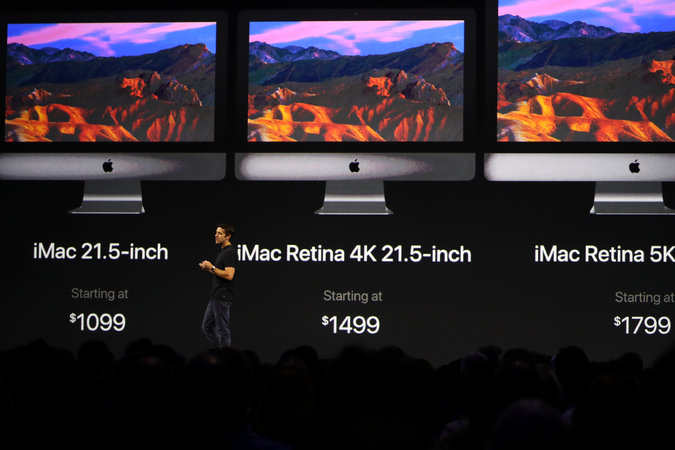 One of the splashiest hardware debuts on Monday was a brand new iMac Pro that will support up to 18 core processors and include a graphic chipset called Radeon Vega. Translation: It’s Apple’s all-in-one desktop on steroids.

“It’s going to be the most powerful Mac we’ve ever made,” said John Ternus, Apple’s vice president of hardware engineering.

The new iMac Pro may help compensate for Apple’s previous professional desktop, the Mac Pro, which was widely panned by critics and customers. The iMac Pro will start at $5,000 and ship in December.

Broadly, Apple is catering to members of the professional community, like filmmakers and hardcore coders. For years, such users have felt left behind as Apple has focused on consumer-oriented products like the iPhone, shifting away from high-performance equipment for professionals.

The company also announced upgrades for its 27-inch and 21.5-inch iMacs, its desktop computers, which will start at $1,099, with additional models at $1,299 and $1,799. And Apple lowered some prices for its Macs and said that the MacBook Air, its entry-level lightweight laptop, would get a speed increase. The 21.5-inch model with 4K high resolution will start at about $1,300, with a new 13-inch MacBook Pro starting at $1,300.

Last year was a rough one for the Mac. Fans of the MacBook Pro waited for Apple to unveil a major upgrade for the laptop after the product had remained relatively unchanged for about four years. But when Apple introduced a new MacBook Pro with Touch Bar, a virtual touch strip embedded into its keyboard, Apple customers were divided. Some Apple fans concluded that the Mac was now in the backseat because Apple was prioritizing the iPhone, iPad and Apple Watch.

Every year, Apple updates the underlying operating systems that power its devices. The changes are geeky — remember, these are aimed at software developers! — but they eventually trickle down to how we use iPhones, Macs and Apple Watch.

Since the show is about giving new tools to developers, Apple also focused on emerging technologies. Specifically, Apple highlighted augmented reality, a way for people to view and digitally manipulate the physical world around them through the lens of their smartphone cameras.

The iPhone already supports augmented reality with games like Pokemon Go. Apple on Monday said it was offering a new toolkit for bringing advanced augmented reality applications to iPhone and iPad. Mr. Cook has said several times that Apple was interested in augmented reality, hinting that the company may be developing an augmented-reality headset.

With Apple’s operating system for the Apple Watch, the company demonstrated changes including a new Siri watchface that uses the Siri voice assistant to suggest directions, show calendar items and generally predict what you will want to see. The most substantive changes to Apple Watch focused on fitness, including the ability to track new types of high-intensity workouts.

Apple also unveiled a new operating system for its Mac computers, called High Sierra. The company made privacy a key selling point with this and said the next version of its Safari web browser would block videos that automatically start playing and stop advertising trackers. While users are likely to welcome those changes, it is another blow to web publishers, who rely on ads that Apple will now block. Apple added optional ad blocking to the iPhone and iPad last year.