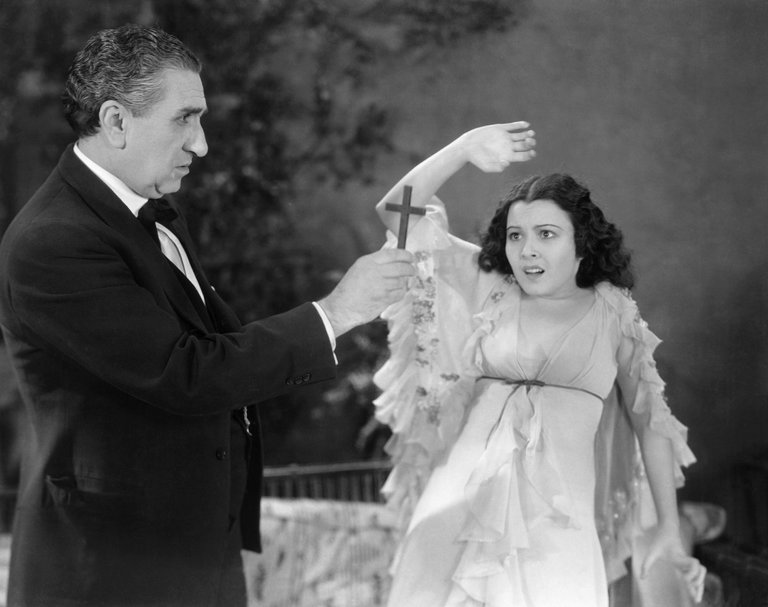 Lupita Tovar and Eduardo Arozamena in the Spanish-language version of Dracula in 1931.

Lupita Tovar, a Mexican-born actress who began her career in silent films and starred as an alluring heroine in the Spanish-language version of the 1931 horror classic “Dracula,” died on Nov. 12 at her home in Los Angeles. She was 106.

Lucy Tovar, a niece, confirmed her death on Facebook.

Ms. Tovar’s movie career lasted less than 20 years, but her work significantly helped promote Mexican cinema — so much so that she came to be known as the “Sweetheart of Mexico.”

She starred in the Spanish-language “Dracula” as Eva Seward, who falls under the evil spell of the vampire. The film was shot concurrently with the celebrated English-language version, starring Bela Lugosi, using an entirely different cast but the same Hollywood sets. (The title role was played by Carlos Villarías.)

Last year, the National Film Registry of the Library of Congress added the Spanish-language “Dracula” to its list of “culturally, historically or aesthetically significant” films.

It was common for Hollywood studios of that era to reshoot English-language movies in Spanish and release them in Spanish-speaking countries, Boyd Magers, editor and publisher of Western Clippings, a magazine devoted to western movies, said by telephone. The magazine interviewed Ms. Tovar, who appeared in several Hollywood westerns, including the 1939 releases “The Fighting Gringo,” with George O’Brien, and “South of the Border,” with Gene Autry.

The Spanish-language version of “Dracula” was shot from 7 p.m. to 7 a.m., after the English-language cast had gone home, Ms. Tovar recalled in that interview. She said she never crossed paths with Lugosi.

Her wardrobe, largely consisting of revealing negligees, also distinguished one version from the other.

“My wardrobe was the sexiest ever,” Ms. Tovar told NPR in an interview in 2008, and very different from the clothes Helen Chandler wore in the more strait-laced English-language version.

Ms. Tovar said that the 1932 film “Santa” (“The Saint”), in which she played a country girl who is seduced and abandoned by a soldier and becomes a prostitute, “started Mexico’s film industry.” The Mexican government issued a postage stamp featuring her in that role.

She also had leading roles in the Spanish-language version of the horror movie “The Cat Creeps” (1930), which co-starred the romantic idol Antonio Moreno, and in English-language movies with Buster Keaton and Henry Fonda.

In 2001, the Mexican Academy of Arts and Sciences awarded her the Golden Ariel, a lifetime achievement award.

Ms. Tovar recalled being discovered by the documentary director Robert J. Flaherty when she was 18 and still in school in Mexico.

“Fox would bring young people into the United States from Italy, Spain, Brazil and finally Mexico,” she said, referring to the 20th Century Fox studio.

Invited to Hollywood at 18, and accompanied by her grandmother, she was one of 65 aspiring actresses who were given screen tests. Fox ranked her No. 1, she said, and signed her to a $150-a-week contract for one year (the equivalent of about $110,000 a year today) to appear in four silent films.

She said she improvised in many of the scenes. “Directors would say, ‘Can you dance?’ and I’d say, ‘Sure!’” she recalled. “I faked it. I never said no when they asked ‘Can you do this?’ I always said yes.”

Guadalupe Natalia Tovar was born on July 27, 1910, in Matías Romero, a small town in southwest Mexico, and grew up outside Mexico City. She was the oldest of nine children in an impoverished family and described her father as a strict man who initially frowned on her acting ambitions.

In Hollywood she married Paul Kohner, a producer and later a powerful talent agent who represented Yul Brynner, Greta Garbo, Henry Fonda and David Niven, among others. He died in 1988.

Their daughter, the actress Susan Kohner, was nominated for an Academy Award for best supporting actress for her performance in Douglas Sirk’s melodrama “Imitation of Life” in 1959.

Ms. Tovar’s survivors include her daughter; a son, the producer Pancho Kohner; and grandchildren, two of whom, Chris and Paul Weitz, are filmmakers and screenwriters. They co-directed “American Pie” (1999) and “About a Boy” (2002), for which they shared an Academy Award nomination with Peter Hedges for best adapted screenplay.

“You simply can’t do two things and do them well,” she told Western Clippings. “Something will suffer. It is not satisfactory. I preferred my family to my career.”