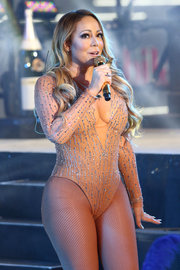 Mariah Carey suffered through a performance train wreck in Times Square on New Year’s Eve as technical malfunctions left her at a loss vocally during her hit song “Emotions,” struggling to reach notes and to sync the lyrics and music.

The trouble continued when she gave up on another of her best-known numbers, “We Belong Together,” while a prerecording of the song continued to play, a confirmation that she had been lip-syncing.

It was a rare meltdown on national television by one of the top-selling recording artists of all time. Ms. Carey, a pop phenomenon in the 1990s who won five Grammys out of 34 nominations over the years, was the final pre-midnight act on ABC’s “Dick Clark’s New Year’s Rockin’ Eve with Ryan Seacrest.” She had just finished “Auld Lang Syne” when her star turn began to spiral out of control.

“We can’t hear,” she said in the opening seconds of “Emotions” after she sashayed down the stage before more than 1 million people gathered to watch the ball drop in Manhattan.

Standing still with her left hand on her hip while music played, Ms. Carey told the audience that there had not been a proper sound check before her performance. Then she said, “We’ll just sing,” and noted proudly of her song, “It went to No. 1.”

But she could not manage the notes that followed, and she either forgot lyrics or did not want to deliver a subpar performance.

“We’re missing some of these vocals, but it is what it is,” she said. “Let the audience sing.”

ABC quickly cut to shots of the Times Square crowd as Ms. Carey tried to perform some of her choreography. She continued suggesting fixes from the stage, and at one point seemed to defend herself. “I’m trying to be a good sport here,” she said.

When the number ended, the crowd cheered her on. “That was — ” she said, pausing for effect, “amazing.”

She seemed to recover at first with “We Belong Together,” but there appeared to be another malfunction, and Ms. Carey again stopped singing. But this time, the prerecorded number kept playing.

“It just doesn’t get any better,” she said, and then left the stage.

The cause of the technical malfunction was not immediately clear. After the performance, Ms. Carey tweeted out an expletive-laden slang phrase with an “upset” emoji, then wrote: “Have a happy and healthy new year everybody! Here’s to making more headlines in 2017.”