During her tenure, Steppenwolf presented a long list of critically praised productions. Several transferred to Broadway, winning nine Tony Awards. The theater’s restagings of Ken Kesey’s “One Flew Over the Cuckoo’s Nest” and Edward Albee’s “Who’s Afraid of Virginia Woolf?” both won Tonys for best revival.

Mr. Letts’s “August: Osage County” was developed at the theater and had its world premiere there. After moving to Broadway, it won five awards at the 2008 Tonys, including best play. Mr. Letts went on to win a best-actor Tony in 2013 for “Who’s Afraid of Virginia Woolf?”

Steppenwolf’s production of Mr. Letts’s “Superior Donuts” opened on Broadway in 2009 and was developed into a television series, with Judd Hirsch and Jermaine Fowler, that had its premiere on CBS in February.

Martha Ann Lavey (rhymes with navy) was born on Feb. 20, 1957, in Lawrence, Kan., where her father, Robert, was a graduate student at the University of Kansas and was later recruited by the C.I.A. as a Russian specialist. Her mother, the former Patricia Colchin, was a homemaker.

When Martha was 11, the family moved to Detroit. She attended Immaculata High School, where, her sights already set on an acting career, she appeared as Annie Sullivan in “The Miracle Worker.”

She studied drama at Northwestern University, graduating with a bachelor of science degree from its School of Communication in 1979. She then enrolled in an acting class taught by Mr. Malkovich, who cast her as a Brazilian Indian in Christopher Hampton’s “Savages” at Steppenwolf, which he was directing.

The play is remembered as one of the theater’s most spectacular disasters — Mr. Malkovich later called it “the worst production of a play in the history of Chicago theater” — but Ms. Lavey emerged unscathed. 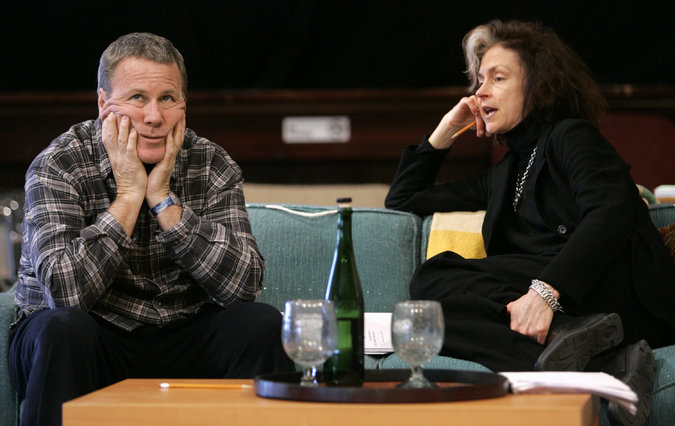 John Heard and Ms. Lavey in Don DeLillo’s “Love-Lies-Bleeding” in 2006 in Chicago.

A marriage in the early 1980s ended in divorce. In addition to her brother Jim, Ms. Lavey is survived by her parents; a sister, Michele Dragisity, and four other brothers: Kevin, Matt, John and Patrick.

Ms. Lavey returned to Northwestern for a master’s degree, awarded in 1986, and a doctorate in performance studies, awarded in 1994. Frank Galati, one of her teachers, cast her in her breakthrough role, as a fragile recluse in Wallace Shawn’s “Aunt Dan and Lemon,” which Mr. Galati directed at Steppenwolf in 1987.

“The exquisitely beautiful Lavey, with her flawless, hypnotic diction and dreamy grace, captures the girl’s ghostly quality — turning her into a kind of cracked porcelain doll,” the critic Hedy Weiss wrote in The Chicago Sun-Times.

Ms. Lavey appeared in productions at other Chicago theaters, most notably at the Goodman, where Mr. Galati directed her in Shakespeare’s “A Winter’s Tale” in 1990.

“If there is one performance that dominates the production, it is Ms. Lavey’s tremendously affecting Hermione,” Frank Rich of The New York Times wrote. “To testify in the trial scene, she rises from her prison through a trapdoor in a gray smock and bare feet, then argues against her husband’s false accusations.

“As she does so,” the review continued, “Ms. Lavey stands completely still, her arms dangling at her side, her raven hair streaming down her back, her eyes glassy with grief but never pleading. She offers the simple dignity of a true martyr, not the melodramatic piety of the self-martyred.”

Ms. Lavey continued to act after taking over as artistic director, usually appearing in one Steppenwolf production each year. In 2005 she appeared opposite Mr. Malkovich in “Lost Land,” by Mr. Jeffreys.

Her commitment to new plays and new writing was evident in her sponsorship of Mr. Letts, to whom she gave carte blanche after seeing “Killer Joe,” his first play. Mr. Letts recently told The Chicago Sun-Times: “I went to her with ‘August: Osage County’ before I had written it — and told her I have a three-act, three-and-a-half-hour play, with 13 characters in it, and there’s a three-story set — and she said, ‘Great! Go write it. We’ll do it.’”

Under Ms. Lavey’s leadership, Steppenwolf doubled the size of its ensemble and opened the Garage Theater, whose annual Garage Rep series presents works by small local companies. Ike Holter’s play about the Stonewall uprising, “Hit the Wall,” which opened at the Barrow Theater in Manhattan in 2013, came out of the Garage Rep program.

Ms. Lavey also created an experimental series for the Studio Theater, a former rehearsal hall that she turned into a permanent theater, Steppenwolf Upstairs.

And she created Steppenwolf for Young Adults, a series serving the public schools with plays aimed at teenagers; the School at Steppenwolf, which offers training residencies; and First Look Repertory of New Work, a program presenting new plays in development.

Ms. Lavey stepped down as artistic director in 2015, shortly after two of her productions, Lisa D’Amour’s “Airline Highway” and Kenneth Lonergan’s “This Is Our Youth” made the leap to Broadway.

She was succeeded by Anna D. Shapiro, the Tony-winning director of “August: Osage County.” Ms. Shapiro had been hired to run the New Plays Lab, a workshop for developing new writers and works, in 1995, the same year Ms. Lavey became artistic director.

An earlier version of this obituary misstated the year the Steppenwolf Theater production “August: Osage County” won five Tony Awards. It was 2008, not 2007.