Mr. Roth, who had a second home in Vancouver, British Columbia, told the Sächsische Zeitung newspaper in Dresden on June 1 that he was hoping to take on a guest professorship in Vancouver in September to pursue what he called “my current theme: intellectuality and resistance.”

It was in that interview that Mr. Roth revealed publicly the cause of a marked weight loss: cancer. Without specifying the exact nature of his disease, he said it had been discovered during a routine checkup on his return to Germany from London. He had undergone radiation therapy, he said, but was determined to keep working.

A statement from the German foreign minister, Sigmar Gabriel, said Mr. Roth is survived by his wife and three adult children. In keeping with German privacy laws, the statement did not identify them by name. Mr. Gabriel called Mr. Roth “a cultural visionary and a true fighter for tolerance and openness to the world.”

Monika Grütters, the German government’s most senior figure for culture, said in a statement that the German and international museum worlds had lost “one of their most striking and most controversial personalities.” 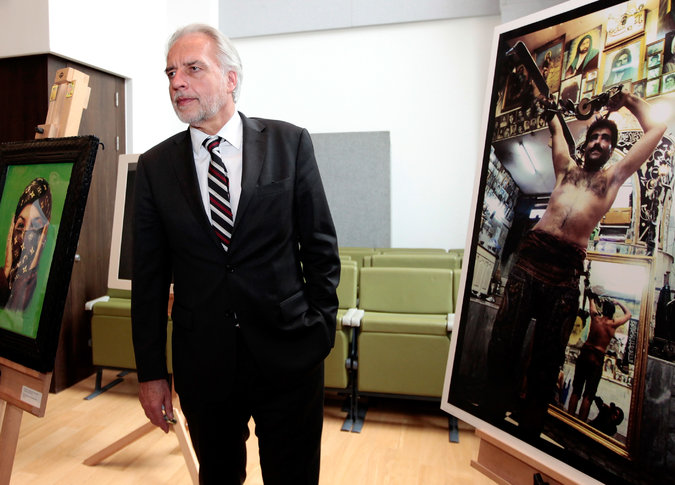 Martin Roth in 2012 with photographs from an exhibit called Light from the Middle East. In his last months he made “intellectuality and resistance” his theme.

Mr. Roth was born in Stuttgart on Jan. 16, 1955, and grew up in southwest Germany. He studied cultural sciences at the University of Tübingen, where he earned his master’s degree and a doctorate specializing in the history of museums and cultural institutions in the Third Reich.

Among a series of important posts, he was president of the German Museums Association from 1995 to 2003 and helped design the Expo 2000, a world’s fair in Hanover. He also served, from 2001 to 2011, as director-general of the Dresden State Art Collections, which includes 12 museums.

Mr. Roth’s multiple international activities included a major exhibit on the Enlightenment mounted in Beijing, from 2011 to 2012, combining works from the Dresden collections, the extensive Prussian cultural foundation in Berlin and the Bavarian state galleries in Munich.

Mr. Roth’s background in Dresden, the city bombed by the Allies in early 1945 and since then lovingly reconstructed, made him an outspoken critic of the far-right Pegida movement, an anti-immigrant, anti-Muslim organization that started its weekly (now monthly) protests in that city in late 2014. The marches were a foretaste of the antimigrant, nationalist sentiment that swelled in Germany and Europe in 2015 and 2016 and that was also reflected in the “Brexit” vote.

Mr. Roth made his mark at the Victoria and Albert with record-breaking exhibitions focused on David Bowie in 2013, Alexander McQueen in 2015 and The Beatles and the youth revolution of the 1960s in 2016.

While critical of Britain, he said before leaving the museum in 2016 that he still viewed London as a center of tolerance; he exulted in having 28 nationalities represented on the museum’s staff. “Can you imagine a British director of the Louvre?” he asked an interviewer from The Daily Telegraph. “It would never happen.”

As an adolescent, he recalled, he had long, blond hair and was often mistaken on travels across Europe for a Swede. When asked then if he was ashamed of being German in the wake of his country’s recent Nazi past, he said, “I always said, ‘Yes.’ ”

As he told The Times last year, as a German born in Germany in the 1950s, “you can’t even imagine to have a German identity.”

Above all, he said, his academic work on Nazis and the culture of the Third Reich taught him that you could not stand by in times of difficulty and simply observe, as he said many intellectuals did.

“Looking at that time,” he said to The Daily Telegraph last year, “you see how art and culture can be controlled for political purposes, which can happen very easily, without you realizing it.”